Costing £2,500,000 she was launched by Mrs Jan Smuts by telephone on 19th August 1947 as a replacement for the lost Windsor Castle.

With her sister the Edinburgh Castle (3) she was an enlarged version of the Capetown Castle, the company's largest ships to date and propelled by steam.

The story was always told that the reason the "Pretoria Castle" and her exact sister the "Edinburgh Castle" were steam turbine rather than motor ships was that Harland & Wolff at Belfast had on their hands the turbines and boilers destined for naval ships the orders for which were cancelled in 1945.

More than likely true for in all other respects the ships were simply larger versions of the "Capetown Castle".

The fact was that with the austerity then prevailing, there were shortages of just about everything, importantly including the finance for building ships, the two new mail ships were built as cheaply as possible.

The "Pretoria Castle" was noteworthy in that she was the first (and possibly only) ship to be launched electronically by radio.

The Company wanted Ooma Smuts the wife of General Smuts, Prime Minister of South Africa to launch the ship, Ooma Smuts was too frail to make the journey to Belfast and thus this unique radio connection was set up so that she could set the ship down the slip way from her home in the Transvaal. 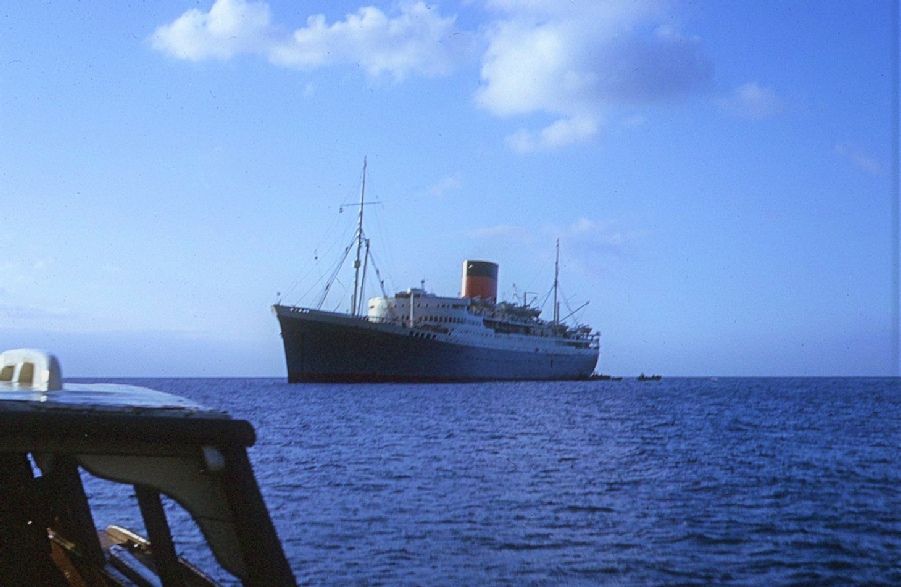 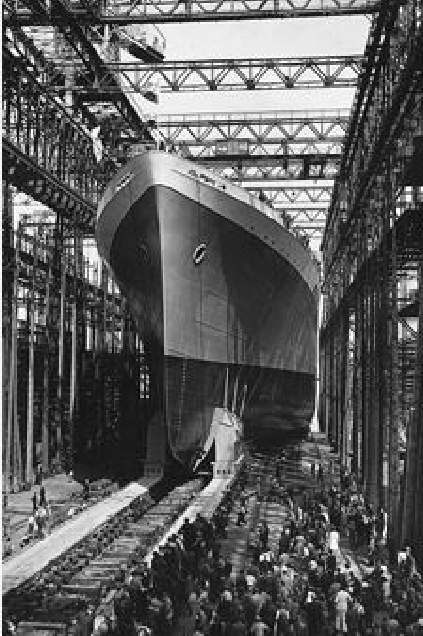 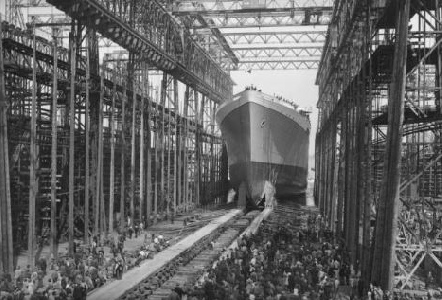 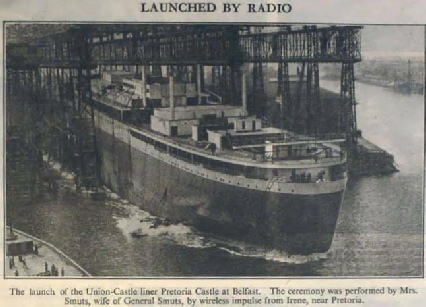 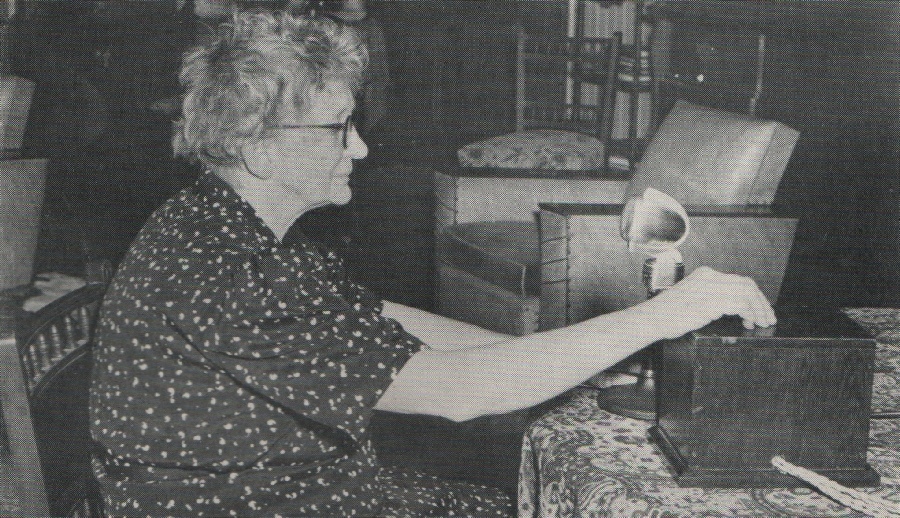 The launching platform in Belfast awaiting the signal from Pretoria

In Pretoria, Mrs Jan Smuts pressing the button which set the mechanism going for the launching of Pretoria Castle 6000 miles away. 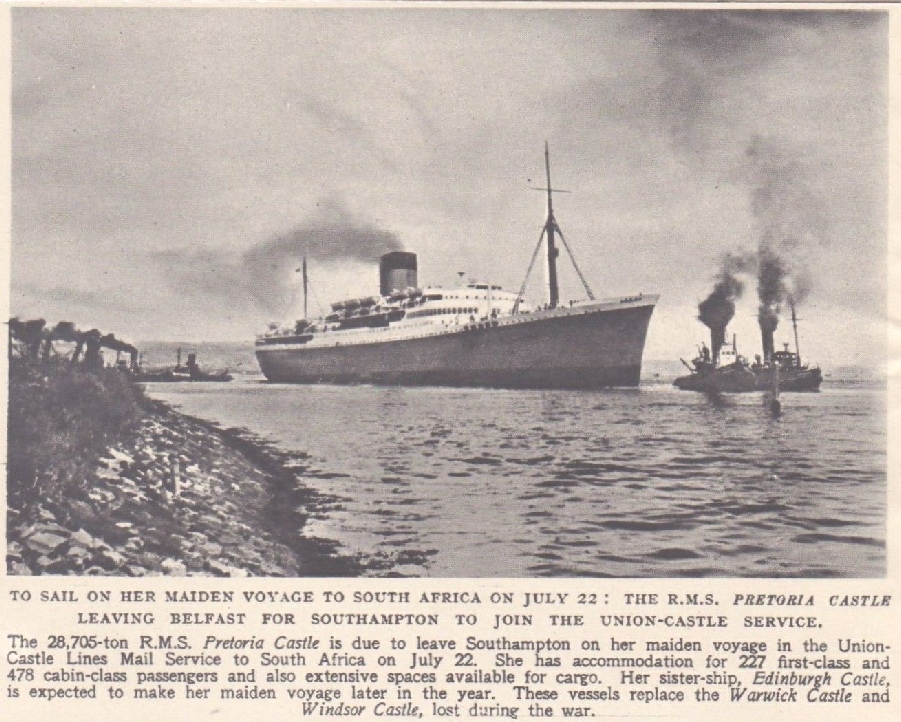 On 15th June 1953 she hosted Government guests at the Spithead Coronation Review and took part in the procession through the lines formed by 260 ships which was headed by Trinity House's Patricia, the then Royal Yacht HMS Surprise, followed by Orient Lines Orcades, Pretoria Castle, P&O's Strathnaver and British Rail ships carrying Admiralty staff.

The Coronation Spithead Review of  1953, with guest liners, Pretoria Castle, Orcades and Strathnaver, following astern of the warships. 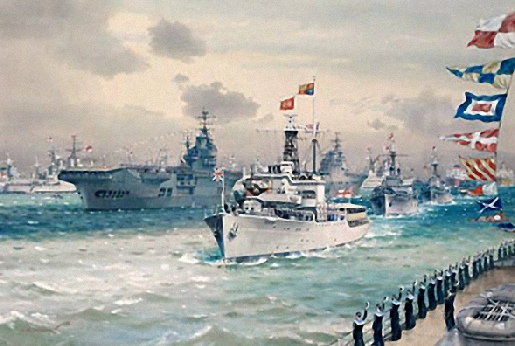 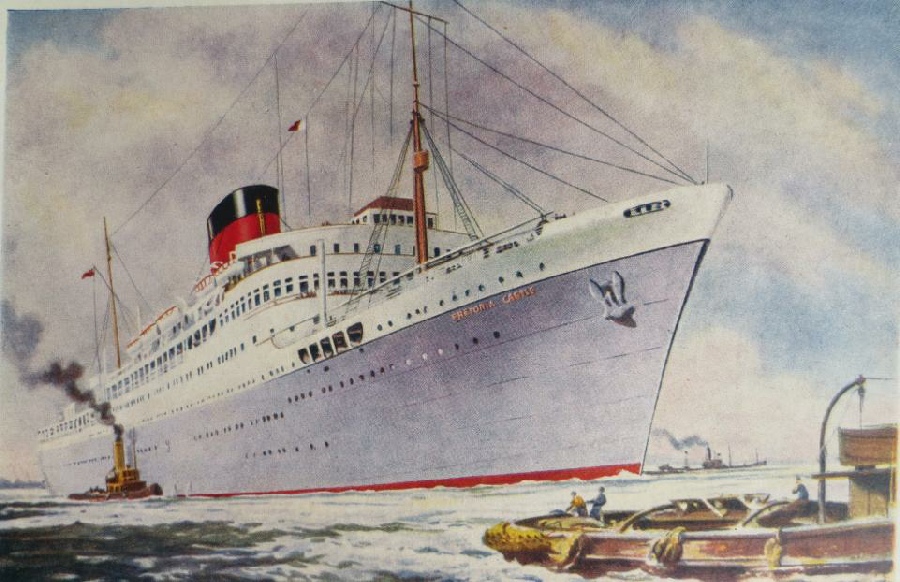 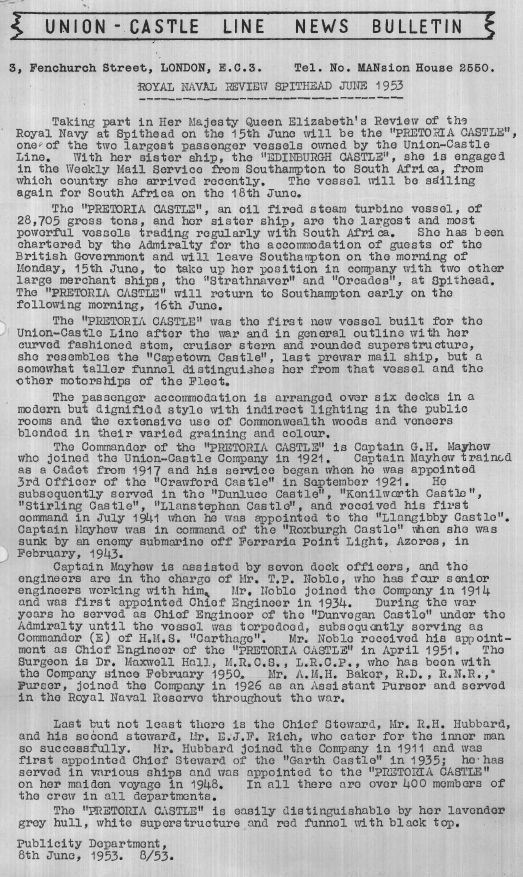 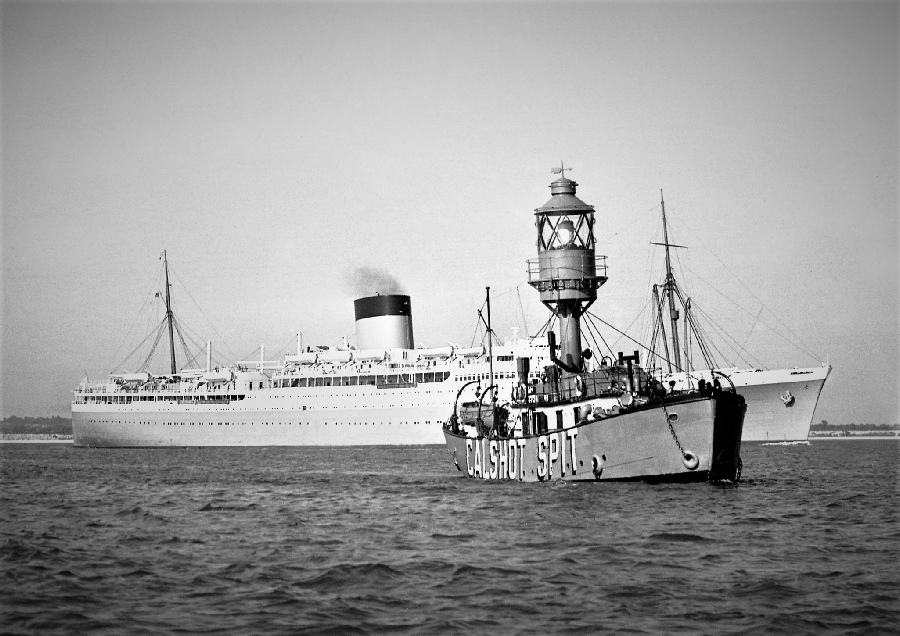 Photo by Beken of Cowes 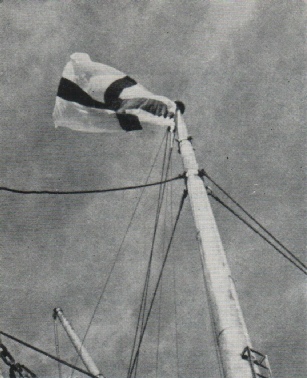 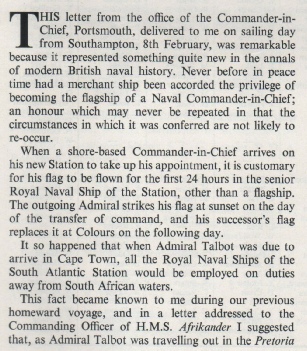 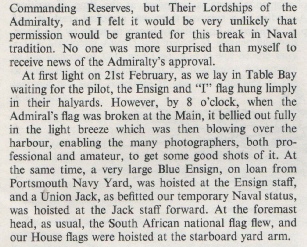 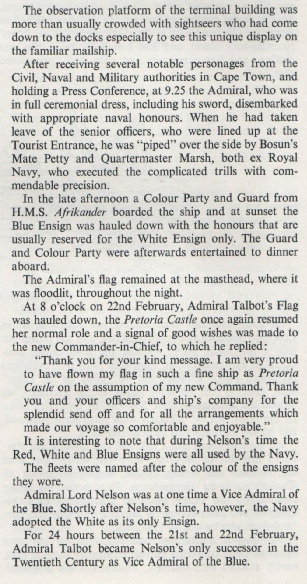 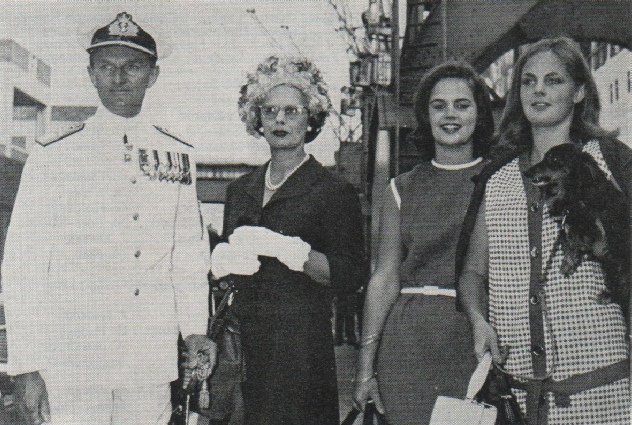 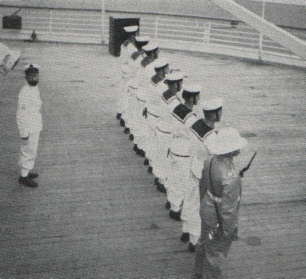 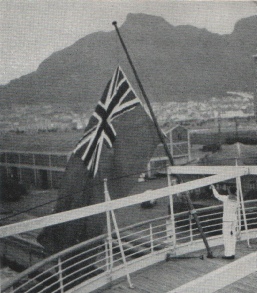 As portrayed on the front covers of the South African Shipping News magazine.

In 1965 both Pretoria Castle and her sister ship Edinburgh Castle underwent refits so that they could meet the specifications of the accelerated eleven and a half day mail schedule due to be inaugurated that year.

The refit included: shot-blasting the hull, some engine and propellor modifications - these increased the speed by 1 knot.

They were also given mast layouts similar to Pendennis Castle, i.e. reduced foremast, removal of the main mast and the fitting of a signal mast just abaft the monkey island. 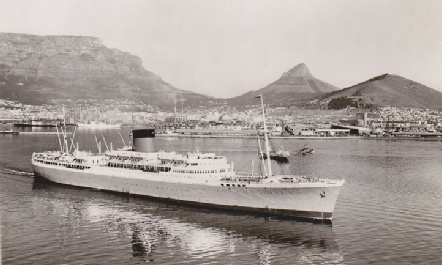 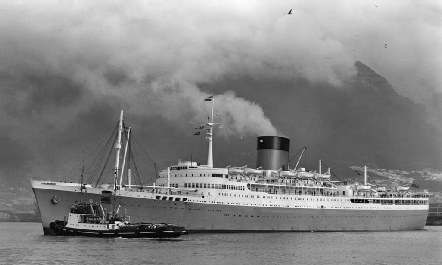 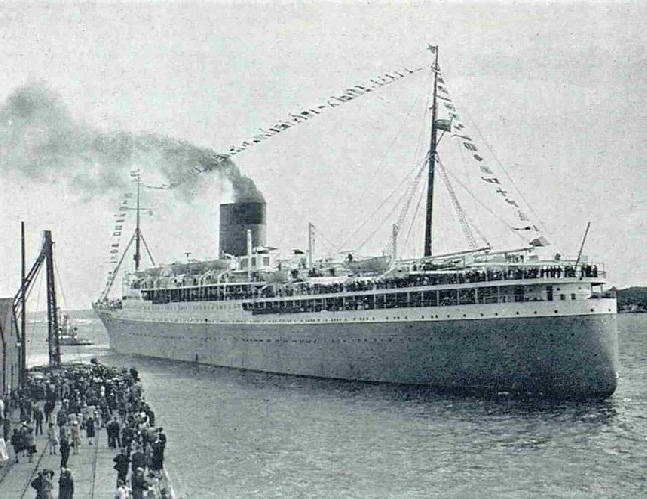 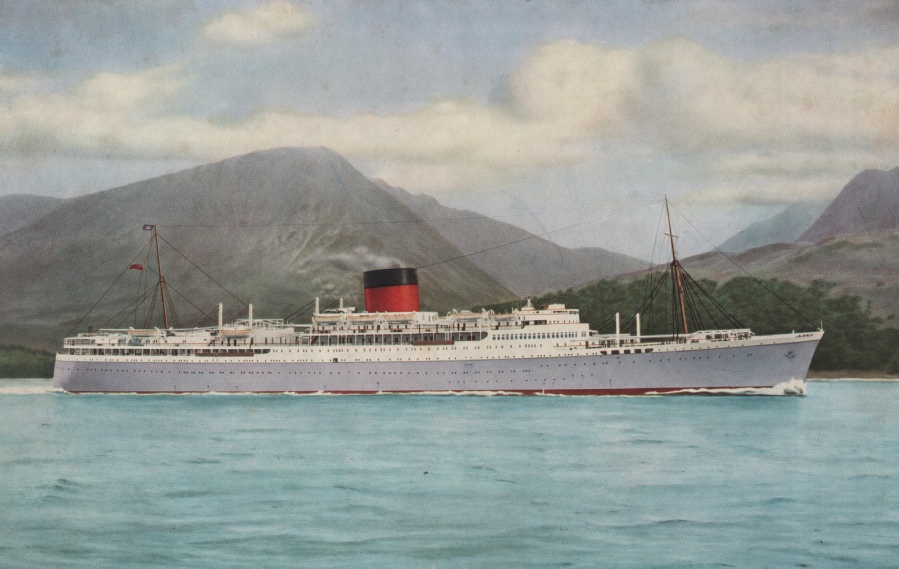 On trials off the Isle of Arran