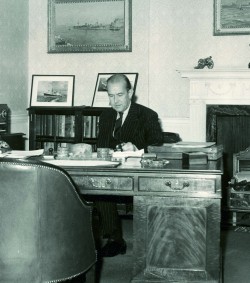 Sir (William) Nicholas Cayzer, 2nd Bart. of Roffey Park, Baron Cayzer of St. Mary Axe in the City of London (1910-1999) was the elder son of Sir August Cayzer Bart., and the last member of the family who could properly describe himself as a ship-owner.

Educated at Eton and Corpus Christi College, Cambridge he began work, in 1939, in the outward freight department of Cayzer, Irvine’s London office under the legendary Fred Bedford.

Following his marriage in 1935 to Elizabeth Catherine Williams of Aberpergwm, South Wales he was appointed Assistant Manager in Glasgow soon after becoming a board member of Clan Line Steamers and Cayzer, Irvine & Company.

Shortly before the outbreak of the Second World War he was sent to Liverpool, the country’s busiest port, as Manager of the family office.   After a brief period in the Army, he was ordered to return there in 1941 so that he could manage the ships and the vital convoys setting forth from the Mersey.   He was appointed a member of the Mersey Docks and Harbour Board, which administered the port of Liverpool, and, in 1944, made Chairman of the Liverpool Steamship Owners’ Association.

By now he was seen as a commanding figure in shipping who, upon the death of his uncle, Harold in 1948, succeeded him as Vice-Chairman of the company and took on the day-to-day running of the business.   He played a leading role in the negotiations between Clan Line and Union-Castle Line, which, in 1956, led to the amalgamation of the two concerns, the new holding company being named British & Commonwealth Shipping.

It’s apt motto, Tendimus (We Press Forward) reflected his grandfather’s philosophy of keeping the business afloat at all costs:  He would build on Sir Charles’s policy of diversification and on his deep sense of loyalty to his employees.

In 1958, following the death of his uncle, Herbert (Bertie), Nicholas became Chairman of the group and over the next decade went on to hold shipping’s key posts:  in 1959 he was President of the Chamber of Shipping and of the General Council of British Shipping; in 1963 he became President of the Institute of Marine Engineers and in 1969 the Prime Warden of the Worshipful Company of Shipwrights.

Together with his family and a team of first-class managers he steered British & Commonwealth towards, as yet, unchartered waters.   By 1960 the company was becoming heavily involved in the airline business, which resulted in many shifts of policy as it developed from Hunting-Clan to British United Airways to Air UK.   Then, to the relief of Nick, British & Commonwealth moved on to other things keeping, however, a share of the highly profitable Bristow Helicopters and of a successful ground services business, Servisair.

In the manner of his grandfather, father and uncle he exploited during these years every new development in order to keep the ships afloat but the 1966 Seamen’s Strike became the first of many milestones that led Clan Line, once the largest cargo carrying company in the world, and Union-Castle Line gradually to sell off or scrap their vessels.   Instead, engineering, hotels, canning, insurance, investment trusts and banking took their place and British & Commonwealth saw rapid growth.

By 1987 the Cayzer family had become concerned at their loss of total control of the business and decided to divide the group retaining Caledonia Investments and selling British & Commonwealth its purchase having been guaranteed by five banks.

In 1982 Nicholas (Nick) was created Baron Cayzer in recognition of his contribution to shipping and politics.   Since his days in Liverpool he had become a leading figure in the local Conservative Party and later Chairman of the Chester Constituency Association.   During the early 1960s he was adviser to the Minister of Transport, Ernest Marples and in the 1970s he acted as a crucial link between business and the Centre for Policy Studies set up by Sir Keith Joseph and Margaret Thatcher.

His elder daughter, Nichola, married Michael Colvin who became the Conservative Member of Parliament for Bristol North-West and then for Romsey and Waterside.