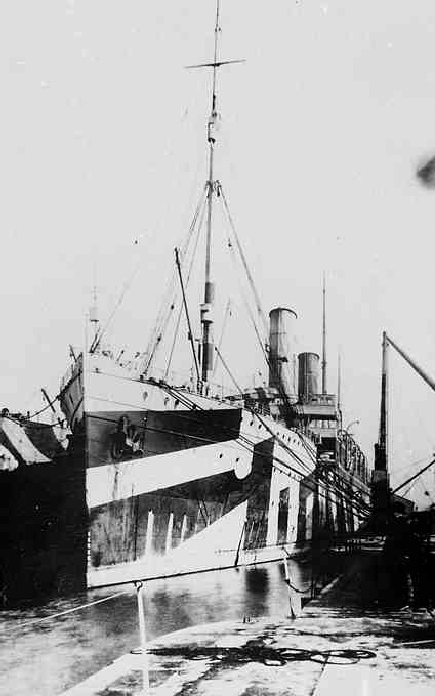 On 4th August 1914 she was requisitioned by the Admiralty and converted into an Armed Merchant Cruiser for service in South African waters when, en route to her station, she took part in the hunt for the German Kaiser Wilhelm de Grosse, a Norddeutscher Lloyd vessel which was eventually sunk on 26th August.

She next captured the German sailing ship Werner Vinnen which was carrying coal off the Canaries and dispatched her to Freetown with a prize crew.

In the September she captured the German barque Heinz off Port Nolloth, South West Africa before covering the landings of South African troops into German South West Africa and then acting as guard ship at Walvis Bay.

In December 1914 the German light cruiser SMS Koenigsberg sailed from Dar-es-Salaam in German East Africa for the Gulf of Aden where she sank the new Ellerman ship City of Winchester. HMS Astreae then went in to destroy the wireless station and the locals unwisely sank the floating dock across the harbour mouth. Deprived of her base the Koenigsberg took refuge in the Rufiji Delta at Satale up the Simba-Uranga tributary from where she raided nearby Zanzibar and sank HMS Pegasus on 20th September.

The Royal Mail ship Trent towed two monitors, Mersey and Severn, from England and the destruction of the Koenigsberg commenced on 11th July. After a second attack the Koenigsberg ceased fire at 13.50hrs and was scuttled at 14.00hrs.

The Kinfauns Castle recovered the British wounded and resumed her patrol. In 1916 she reverted to trooping with the first class accommodation being reserved for government officials and in 1919 she returned to commercial employment on the mail service

1919 Returned to the mail service