Sister of the Briton she was, on completion, immediately chartered to the French Government for use in the Crimean War. In 1856, due to a surplus of coal, she was laid up at Southampton with the intention of using her for the November sailing to South America but this voyage never materialised.

On Saturday morning we received the following telegram from our Port Elizabeth agent.

“The Dane struck on Dekeeder Reef from hugging shore too closely.

“ Weather beautifully fine and passengers and crew were got into boats without much difficulty, and picked up by the shore boats.

“ The Saxon proceeded to the wreck last night, but was unable to save any of the cargo.

“ The Dane’s foremast went overboard before her officers left, and she has since broken up and sunk.

“The agents of the company and the officers of the Dane had gone overland to the (site?) of the wreck, to save what (cargo?) may wash up.”

The following telegrams were received on Saturday from Mr. Farmer by Messrs Anderson and Co.

“Wrecked steamer Dane broken up and nothing of her visible  save engines.

“Beach strewn with wreck and casks for three miles.   Not seen Waldek yet.

Waldek just arrived from Recif.   Reports that Dane being under sail and steam – he being on deck all the time – struck on a reef this side of (Recife?), one and a half mile from shore, and not marked on chart, lead showing five fathoms.   Hogged and (fished?) instantly and engine (forcing?) through decks.

“ Sent boat away with passengers and left ship at 6.40

“Part of mails washed up.

“Messrs William Anderson and Co. received a further telegram yesterday morning stating that cargo continues to be washed up but in a very damaged condition, and the wreck and salvage to be sold  today.

The following telegram received from the Post Master of Port Elizabeth, having reference to the mail by the steamer Dane wrecked on Friday last on Cape Recif (as?) published in (???????) Gazette.

“One bag market H.M. Fleet containing letters and papers for H.M. St. Highflyer; addresses on a number of letters washed off; 91 letters from Cape Town to Natal recovered and addresses of them all legible;  A (few?) letters for Zanzibar also recovered’   The (whole?) of the letter (????) of the Cape Town mail to Natal has now been recovered.”

The original mail service as contracted by the Union Line was a monthly service between the United Kingdom and South Africa, the terminal ports being Southampton and Cape Town (Table Bay).   The vessels had to call at the islands of St. Vincent, or  Madeira, and Ascension to take on coal.   The voyage, very reliant on weather could take anything up to five months.   The ships then had a month layover in Table Bay, there was then no harbour, ships lying to mooring anchors provided by the harbour authorities.   (See the reports on the loss of the “Athens”)

The mail service was later extended to Algoa Bay, (Port Elizabeth) and then to East London and Port Natal, (Durban) which, as with Table Bay, Algoa Bay as only an anchorage.   It would be some years before the mail ship could cross the bar into Durban harbour.

For the best description of life aboard these early mail ships, you can do no better than to read ‘My Life at Sea’ by Captain William Caius Crutchley, R.N.R. published by Chapman & Hall, 1912., now obtainable as a reprint.

The very well known "Every Thursday afternoon at four o'clock" sailings advertised by Union-Castle for many years may well have its foundation from the very beginnings of the Union Line, it is surprising how oftten their ships were advertised as sailing from Cape Town at 4 p.m.!

The 'Argus' was published on Tuesday, Thursday and Saturday.   As there was no radio, news of vessels arriving in the Bay was given to the town by the firing of a canon from Signal Hill.  (This was the normal means of giving notice of arrival up the coast from Berg River, a cannon was fired from strategic hills, one of which still survives.)   Thus actual arrival and sailing dates are not necessarily those given.    The sailing time was frequently delayed on Government orders whilst waiting for the outward mail ship, which had been delayed by weather, an all too frequent occurrence

I have used the prefix R.M.St., the usual prefix for the times, when sailing vessels far outnumbered steam ships which, being less weather dependant earned premium rates for cargo and passengers.  The advantages of steam are unquestionable, but the early steamers used their sails to conserve coal and find that bit of extra speed whenever possible.   But Captain Crutchley makes the point that by the time he joined the Union Line, most of his fellow officers were 'steam men', not sail. 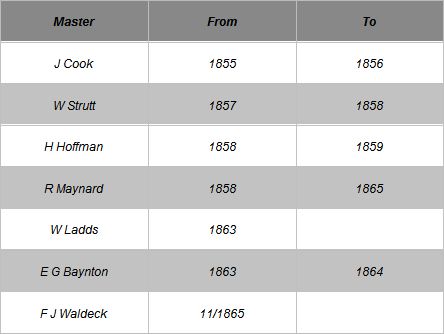 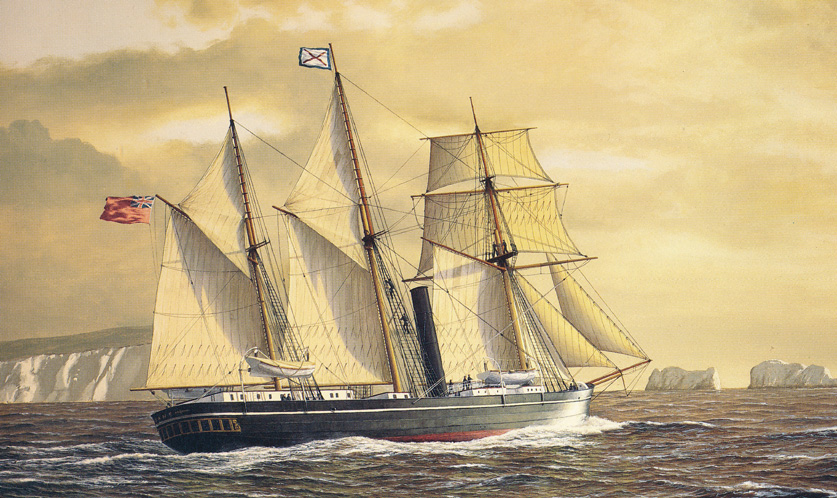 Off The Needles, Isle of Wight, on her way to Cape Town in 1857 to start Union Line’s mailship service 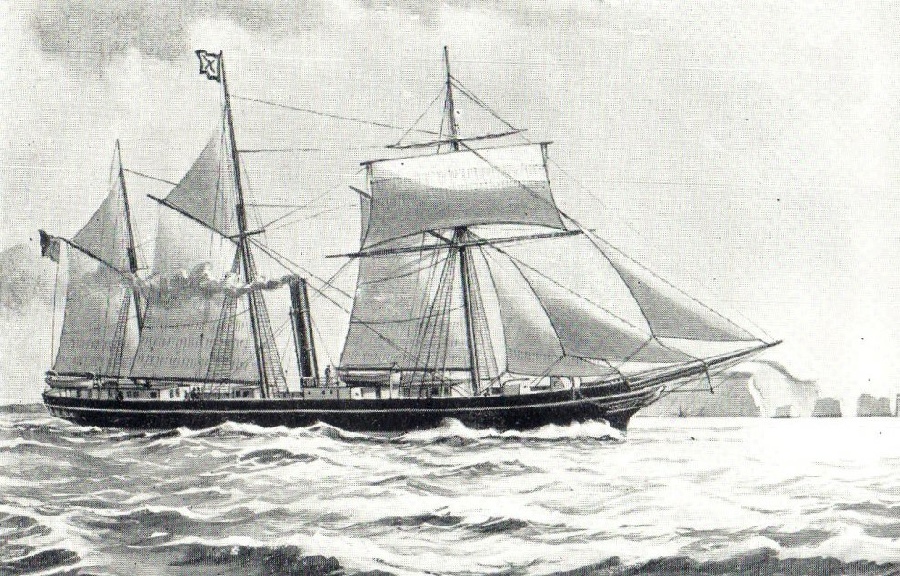 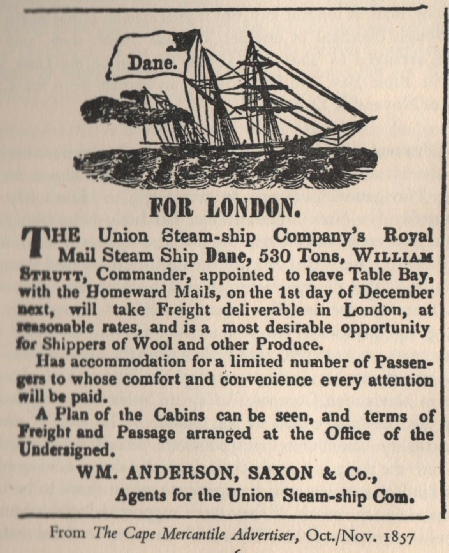 On December 1856 her owners were re-styled Union Steamship Company. In 1857 she followed the Union and the Norman onto the Rio de Janeiro service.

On 15th September of the same year and under the command of Capt Strutt she undertook the first voyage to the Cape Colony with the mails.

For this purpose she was given a red funnel with a broad black top, a livery that was applied to all the Cape Colony mail ships. In 1863 she was placed on the new coastal service followed, in 1864, by the Mauritius service.

On 17th May 1865, whilst at anchor and during the 'Great Gale', she was holed by a drifting sailing ship. In the same year she was chartered by the British Government to carry troops to Zanzibar where they were used to suppress slave trading.

On 28th November 1865 she went ashore whilst approaching Port Elizabeth on a voyage from Simonstown and on 4th December became a total loss.