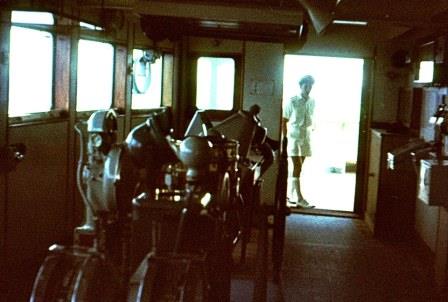 ON "THE WEBSITE"  I was studying the 67 voyage of Reina Del Mar from Southampton to Cape Town and seeing a photo of myself skulking on the stbd wing of the bridge.  I also note that my name is not on any list of crew.  After struggling with an e mail problem, I have decided to send you my details via my e mail and would politely ask if there is any way that you can enter my name as I would like to be remembered for having granted B&C the best years of my life!!

After the Reina I did Master's, then went to do one voyage as Extra 2nd on the Good Hope prior to the lengthy spell on the Pendennis.

While the Pendennis was at the Ocean Terminal in Durban , Captain Smythe summoned me to his dayroom to advise that their lordships required me to join the King Alexander for a passage to Las Palmas as Chief Officer.

I was flown home from Las Palmas and rejoined the Pendennis. Smythe, apparently, asked the company if I could return to his vessel. I was glad that he did.

Perversely, I enjoyed carrying the anthracite duff from the Bluff and spending Xmas on the King Alexander.

I was scheduled to be in the Xmas panto on the Pendennis!!  That was then King Alexander's gain. Probably Pendennis's too.

I know about your golf life and trust that you still play a lot.  Your work for the B&C website is most impressive and you are to be congratulated on your efforts. I have an old shipmate, Graham White,  who tries to have me at Clan Line reunions.  Maybe next year in Jerusalem. I'll bet you attend them both in Liverpool and Southampton.

I spent 20 years happily working for Forth Ports on the Chief Harbour Master's staff.

Good to hear from you and it seems a long time since the Clan Grant.  It was a voyage to India.  NEVER LIKED THOSE.

Alex and I sailed together in 1965 for one trip to India on Clan Grant. A memorable trip for me as it was the only time I ever sailed deep sea on a Clan Line ship, He was third officer and I was a cadet about half way through serving my time.

I remember Alex as one of the good guys, a very conscientious officer  but one who was always cheerful and friendly with those senior and junior to himself.

Strangely, although we never sailed together again I was forever going up a gangway just as he was coming down. I followed him onto Reina Del Mar, Good Hope Castle and Pendennis Castle. It must say something for us both that we sailed, more often than not, on the company’s more prestigious vessels.