Capt Bainton joined his first Clan Line ship in 1965 after service with South American Saint Line. His first command was Roxburgh Castle in 1970

Captain Bainton is married with two children and lives in Bradford-upon-Avon.In hisspare time he enjoys fishing and is currently taking a course in Mathematics with The Open University 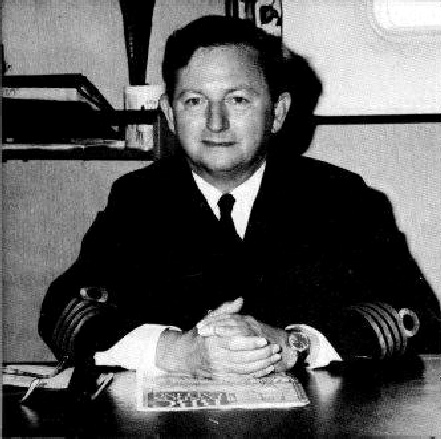 In September 1963 I made my way to King George V Dock in London to join my first ship, St John.

I was one of six deck cadets and it was normal practice in Saint Line for cadets to be treated pretty much as part of the deck crowd. That being the case my lord and master was the Chief Officer, Lenny Bainton.

Like all Saint Line men he took great pride in the ship’s appearance and over the next two years I painted, scrubbed and soogeed every inch of that vessel. I cleaned all the holds in preparation for grain cargoes and dived into all the bilges to remove all sorts of nasty things.

You woud think that cadets would grow to hate such a task master but, not so, Lenny had a kind heart, a sense of humour and was above all something of an intellectual.

He believed that cadets were being trained to be officers and seamen, a philosophy I was most grateful for when I joined the officer ranks, I knew I could tell any seaman what needed to be done and if I was asked how to perform the task, I could show them. For that I am indebted to Lenny.

After Saint Line I never saw him again but was pleased that he progressed to command within B&C, he deserved it