She was launched as the Clan Ross and the last ship to be built by the Greenock Dockyard.

When completed in March 1966 ownership was under the Houston Line, another subsidiary of the British & Commonwealth Group, but managed by Cayzer, Irvine & Co. Ownership was transferred to Union-Castle in 1976 when she was renamed Kinpurnie Castle.

She became the Kinpurnie Universal under the same ownership in 1979 and in December 1982, was sold to National History Cia Naviera S. A. of Piraeus who renamed her Syros Reefer.

On 31st July 1984 she arrived at Chittagong where she was broken up. 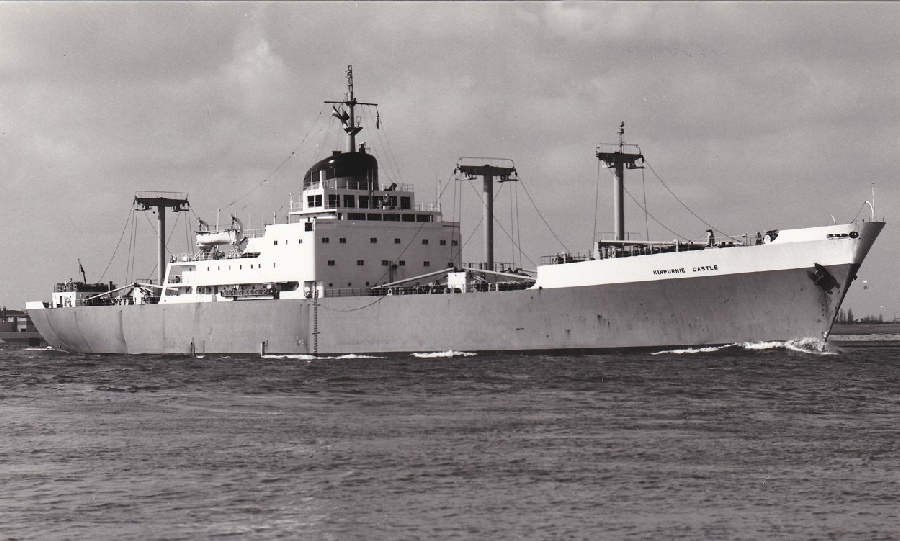 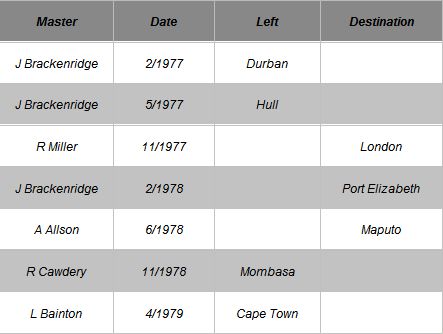 Don’t know whether the attached photo is of interest, but I was Second Mate on the Kinpurnie Castle at the end of 1977. The mailships had all been sold by then but the Royal Mail contract ran until the end of the year. We were told that we were making the final Union-Castle mail run to the Cape before the contract ended that there would probably be interest by the South African press when we arrived.

Since the company wanted to make sure the ship was looking good, the office decided to repaint the hull before we left UK. However, I suspect that money was becoming a bit tight as only one side of the ship was painted before departure.

The agents in South Africa had clearly been informed about this as we were berthed to show off the painted side in all the South African ports. The ship looked splendid from the quay, but the other side was more rust than paint.

I was allowed to keep the Royal Mail pennant which remained in our attic for years. It’s about 2.5 meters long and I was never quite sure how to display it. However, I decided to frame the centre part last year - the rest of the pennant is tucked away at the back. Nevertheless the frame still 1.4 metres long and my wife hasn’t forgiven me!