IN the matter of a formal Investigation held at Westminster Town Hall, on the 27th and 30th days of October 1893, before R. H. B. MARSHAM, Esquire, assisted by Captains RONALDSON and BROOKS, into the circumstances attending the stranding of the British steamship "CONWAY CASTLE," on Vaudreuil Reef, East Coast of Madagascar, on the 10th of May 1893.

The Court, having carefully inquired into the circumstances attending the above-mentioned shipping casualty, finds, for the reasons stated in the annex hereto, that the cause of the said stranding of and consequent serious damage to the said vessel was that a course was steered too close inshore in the vicinity of an outlying submerged reef.

The Court finds the master, Mr. George Jaffrey, in default, and suspends his certificate as master for three months.

Dated this second day of November 1893.

This Inquiry was heard at Westminster on the 27th and 30th October 1893, when Mr. Butler Aspinall appeared for the Board of Trade, and Mr. Garrett, solicitor, for the owners.

The "Conway Castle," official number 77,047, was an iron screw steamship, built by Messieurs Napier and Sons, of Glasgow, in 1877, and was registered at the port of London.

She was rigged as a brig, and was fitted with triple expansion direct-acting vertical inverted engines of 400 horse-power combined, which, as well as new boilers, had been placed in her in 1892.

The vessel was owned by Messieurs James B. Smith and James Currie, Sir Donald Currie, of 304, Fenchurch Street, London, being the manager, he having been so appointed on the 12th of October 1885.

The steamship "Conway Castle" left Natal on the 5th May at 2.22 p.m. with a general cargo of about 400 tons and 9 passengers, bound to Tamatave, in Madagascar, and the Mauritius, her draft of water being 17 ft. forward and 18 ft. 6 in. aft. She had a crew of 83 all told, and was under the command of Mr. George Jaffrey, who holds a certificate of competency as master which was granted in 1872, and is numbered 87,277.

The steamer at the time of sailing was in a good and seaworthy condition and well found in every respect.

She had 3 compasses, the standard compass on the bridge, by which the steamer was navigated, being a Sir William Thompson's. They were adjusted by Messieurs. Lilley and Sons, of London, off the North Foreland, on the 10th June 1892.

The master's compass-book, which had evidently been well kept, was put in, and the vessel was supplied with Admiralty charts of the coast corrected to May 1888, and books of directions.

About 6 a.m. of the 10th of May, the steamer being about 10 miles off the East Coast of Madagascar, she was hauled in shore to try to avoid the current which was running about 1 1/2 knots to the southward.

At 9 a.m. another 4-point bearing was taken by the master and the third officer from Round Hill, which lies inland about 7 miles, and is a prominent mark on that part of the coast, and this still placed her 2 1/2 miles off the coast.

At 9.20 a.m. another 4-point bearing was taken from a black mark ashore, which still placed her 2 1/2 miles from the coast.

At 10 a.m. another 4-point bearing was taken, which gave only 2 miles off the shore.

The master, thinking this was scarcely a safe distance, and presuming he was about 3 miles to the southward of the Vaudreuil Reef, altered the course to N.E. by compass, or N.E. 3/4 E. magnetic, in order to pass a safe distance outside the reef.

At 10.5 a.m. the steamer, which was still going full speed, took the ground.

The master believed he was on the outside edge of the reef, and kept the engines going full speed ahead, but she remained fast. The engines were afterwards reversed full-speed astern, and then various orders of ahead and astern were given, but the vessel did not move.

At 11 a.m. water was reported coming into the stokehole, the steam-pumps were put on, and the water-tight doors in the engine-room shut.

The water gradually increased to about 8 feet, and at about 2 p.m. the engines ceased to work.

The boats were got out, provisioned and ready for lowering. An anchor was placed out about half-cable's length ahead in ten fathoms of water; it was hove taut, but proved of no avail, and at 4 p.m. the engine-room and stoke-hole were full of water.

At midnight the chief officer and six men were sent away in a boat to Vatomandri, distant about 12 1/2 miles to the northward, for assistance; they returned at seven in the evening in a surf-boat, which was sent by the owner's agent.

The passengers and mails were eventually landed at that place to be sent overland to Tamatave.

Every endeavour was made afterwards, by discharging the cargo, to get her off, but without success, and she was finally abandoned by the master and crew after being sold as a wreck on the 20th August, 1893.

It was ascertained that the steamer was ashore on the N.E. part of Vaudreuil Reef, which is about one mile long from north to south, and one third of a mile in width; the channel between the island and the mainland being about one-and-a-quarter miles wide.

A meridian altitude was taken, which gave 19° 31" S. On sounding in the vicinity of the wreck the least water found was 2 3/4 fathoms.

For about a fortnight the crew were employed discharging cargo into a schooner, which had been sent for that purpose, after which most of them were sent home in various ships.

The captain, three officers, two engineers, three stewards, carpenter, cook, baker, one quarter-master, and one boy remained on board to save all that could be got at, and eventually left on the 20th August, having stayed by her 104 days, the wreck having been previously sold.

The master stated that in his opinion formed after the stranding, Round Hill is marked on the chart two miles too far to the southward.

The Court is of opinion that the master is in default in having set a course from 8 a.m., which, if made good, would have only just skirted a submerged reef.

The vessel was set inshore half-a-mile, and this was the cause of the stranding, which occurred in fine weather and broad daylight.

The chart used by the master was on a very small scale, less than 1/8 of an inch to the mile; and it is almost impossible to ascertain one's position with great accuracy when steaming 12 1/2 knots, and close inshore.

These were the facts of the case; and, on the conclusion of the evidence, Mr. Butler Aspinall, on behalf of the Board of Trade, put to the Court the following questions:

1. What number of compasses had she on board, where were they placed, and were they in good order and sufficient for the safe navigation of the ship?

2. When and by whom were they last adjusted?

3. Did the master ascertain the deviation of his compasses by observation from time to time? Were the errors of the compasses correctly ascertained and the proper correction to the courses applied?

4. Whether proper measures were taken at or about 8 a.m. of the 10th of May last, and from time to time thereafter?

5. Whether a safe and proper course was steered after 8 a.m. of the 10th of May, and whether due and proper allowance was made for tide and currents?

6. Whether a safe and proper alteration was made in the course at or about 10 a.m. of the 10th of May, and whether due and proper allowance was made for tide and currents?

7. Whether the total neglect of the lead before the casualty was justifiable?

8. Whether a good and proper look-out was kept?

9. Whether Vaudreuil Rock, Round Hill, and Saddle Hill are correctly marked upon the chart by which the vessel was navigated?

10. What was the cause of the casualty?

11. Whether the vessel was navigated with proper and seamanlike care?

12. Whether the master and officers are, or either of them, is in default?

The master having addressed the Court. and Mr. Aspinall replied on behalf of the Board of Trade, the Court gave judgment as follows:

They were in good order, and sufficient for the safe navigation of the ship.

They were last adjusted in June 1892, by Lilley and Son.

3. The master ascertained the deviation of his compasses by observation from time to time; the errors of the compasses were correctly ascertained, and the proper corrections applied.

4. Proper measures to ascertain the position of the vessel were taken at or about 8 a.m. of the 10th of May, and from time to time thereafter.

5. The course set and steered from 8 a.m. would probably have just cleared the Vaudreuil Reef; but, in the opinion of the Court, it was too fine a course for safety, and it was not made good.

No allowance was made for set in of current.

6. The alteration made in the course at or about 10 a.m. of the 10th May, was in the right direction, but the Court is of opinion that the master ought to have hauled her further out, though, if he had done so, the alteration would probably have been too late to prevent the stranding.

7. The Court thinks it would have been judicious to take a cast of the lead, though the Court does not attribute the stranding to the master not having done so.

8. A good and proper look-out was kept.

9. The Court is of opinion that the Vaudreuil Rock is correctly placed on the chart; and sees no reason to doubt that Round Hill and Saddle Hill are also correctly marked on the chart.

10. The cause of the casualty was that a course was steered too close inshore in the vicinity of an outlying submerged reef.

11. The vessel was not navigated with proper and seamanlike care after 8 a.m. of the 10th May.

12. The master alone is in default, and the Court suspends his certificate for three months.

Enquiry into the Wreck of Conway Castle - 1893

Similar to the Warwick Castle but with a different profile she was delivered for the mail service in September 1877.

She became an Intermediate steamer in 1883 with the coming into service of three new ships Norham, Roslin and Hawarden Castles.

In 1885 she was employed as a troopship in connection with the expedition to Suakin (Sudan).

Like her sister Warwick Castle she was fitted with triple expansion engines in February 1892.

At the same time her passenger arrangements were improved and refrigerating machinery and electric lights were installed. Her outward appearance also changed; her funnel was considerably lengthened and iron bulwarks were substituted for open rails on her decks.

After the alterations she was put on the Mauritius run and met her end on 10 May 1893 when she ran ashore 50 miles south of Tamatave enroute to Durban. The passengers spent 10 days under primative conditions at Vatomandry until the Union liner Arab came along and took them to South Africa. Conway Castle remained fast on the rocks and broke up in a short time. 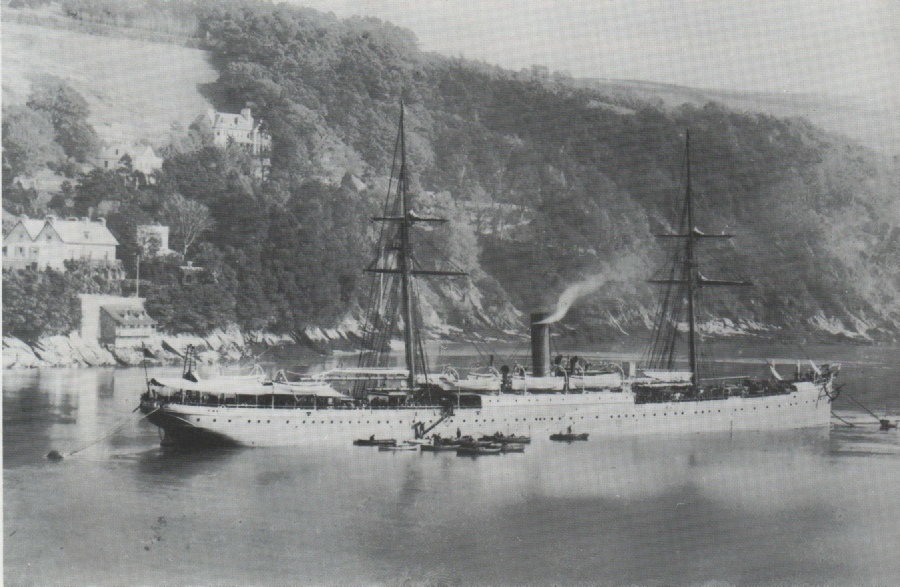