Mr. James Gray was undoubtedly in his early career a great engineer, just as his ‘twin’ Sir Vernon Thompson was a shrewd shipping man, but like his twin, he could not or refused to see, that the world had changed.   There exists  a memo to my father from his assistant, Captain Hodson, then 10 pages of a long rebuttal from James Gray followed by a memo to the Board from Sir George Christopher, the Chairman.

Gray’s rebuttal was to a complete analysis of the state of the mail fleet submitted by the Marine Superintendent. This would of course have been Captain Tomkins who was the Chief Superintendent, London. However as the Southampton mail fleet were under the care of my father and Mr. Dunn, the Engineer Superintendent I have no doubt as to whom was the actual author.

What is interesting about Mr.Gray’s rebuttal is that he brings out the almost incestuous relationship between Harland & Wolff and the Company.   From the time of Lord Kylsant all the Company’s ships were built in Belfast, I very much doubt if tenders from other yards were even invited.

This may to many readers appear to be at very least irregular business practice, however the Company did undoubtedly gain very great advantages to the relationship. The actual record of service and punctuality of the mail-ships was very largely assisted over the years by Harland & Wolff’s contribution.   They kept a large stock of spares, were able to at a moments notice carry out major repair work that without such a large and expensive back up facility would have been impossible.

But the down side of this relationship was to bring the Company to its knees, as can be seen in Mr.Gray’s rebuttal he was in his heart Harland & Wolff’s man. He had been advising Sir Vernon Thompson for years that the fleet was in good order, that superintendents like my father were complaining about nothing, largely through inexperience.   It took Sir George Christopher just seconds on his first meeting with my father to see that here was a man who lived for his ships, who knew every rivet and stringer.

It was very clear to Sir George that it required a wholesale clear out, if the Company was to survive the entire Board and Management would have to go in order to clear the air and allow for a future.   The Cayzer family did just that, they completed the “Pendennis” at Belfast never to return, many of the old Company departments, passenger, stevedoring and such were set up as separate companies.   But most importantly orders for replacement mail-ships were placed, but never again with Harland & Wolff’s of Belfast. 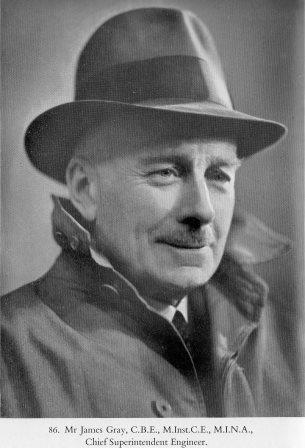