As you probably know I stuck it out until the demise of the Mail Fleet at which time I swapped horses. I worked ashore for Safmarine from 1974-79 by which time I was in the words of my long suffering wife "impossible to live with". I resurrected my sea-going career with Safmarine in 1979 and sailed for a while as c/o being promoted in 1980. Latterly I was fortunate enough to serve in the "big whites" doubly so as they were at that time still calling at Southampton! I made it to the Mail Service albeit not a Mail Ship which was of course the height of my ambition.

I accepted an offer of early retirement in 1994 and found myself "unemployed" for the first time since March 22nd 1955 when I joined the "Good Hope Castle" as Cadet my first ship.

We lived in Tokai as I believe you once did? for the twenty years prior to moving to East London well not quite about 35km west of the "City". We found a self supporting resort where the plots are freehold. I managed to purchase and consolidate two plots at a very reasonable price upon which we built a house. The plots are situated about 200m from a perfect beach and from my study I have a 180 degree view of the ocean from East London to the East to Kayzer's Beach to the West.

I am reasonably healthy and judging by your pursuits so are you - good to know.

Enough from me hoping this finds you and yours in good health and spirits.

ps. I have fond memories of our time together aboard "Rochester Castle!"

Captain Ricky Flint passed away peacefully at his home in East London today.

He is survived by his wife Maggie and three daughters. 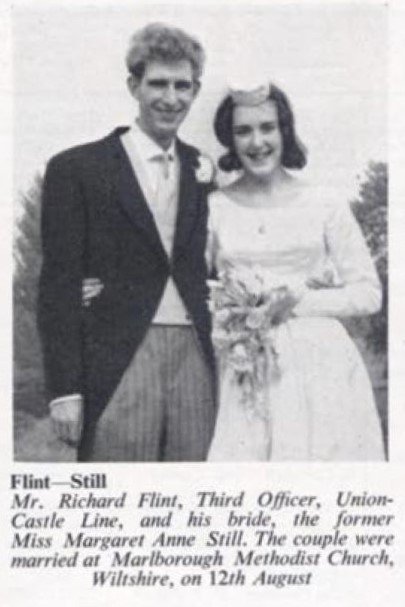