IOLAIRE was built for Sir Donald Currie at the company's first shipyard, the former Robert Napier yard at Govan.

Iolaire was used as an officer cadet training ship.

Although usually white hulled it is said that she was painted in the lavender grey hull and red funnel livery of Union-Castle when being used for training of deck officer cadets. 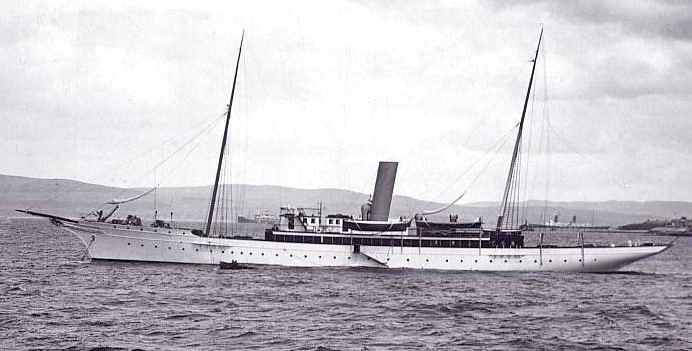 Sir Donald died in April 1909 but IOLAIRE stayed in the Currie family.

In August 1914 she was leased to the Admiralty. Guns were fitted at Portsmouth and she became the flagship of the anti submarine patrol at Stornoway When the shore base was established it was named HMS Iolaire.

She is sometimes confused with the steam yacht HMS IOLAIRE that sank off Stornoway harbour 1/1/1919 with great loss of life; that one was the former AMALTHAEA which had replaced the Beardmore yacht.

In 1939 she was hired by the Admiralty as a senior officers' accommodation ship, then purchased by the Navy in 1943 as renamed PERSEPHONE in 1945.