This was one of Cayzer’s less thought out ventures. I believe the company thought this was a good idea and that they would get an opportunity in the North Sea repair business.

Hartland Point was an ex submarine depot and repair ship, a Fort class WW2 vessel. The joint venture was a disaster - they planned a Manitowoc crane on the back and a helipad forward and that was about it.

They had to get steam men from the fleet to run her.  She worked, as I recall, in the likes of the Moray Firth but the venture only lasted a year or two, in the late seventies she was laid up in Birkenhead. 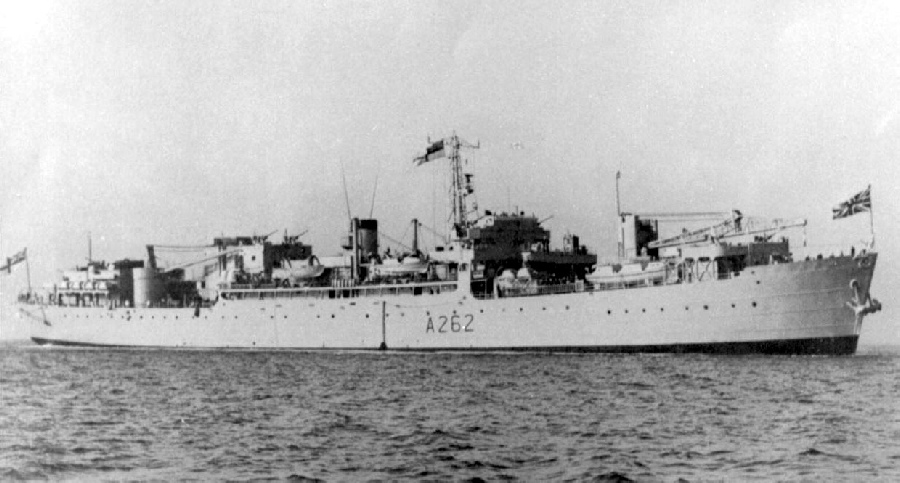 1960: Operational base ship at Hong Kong; 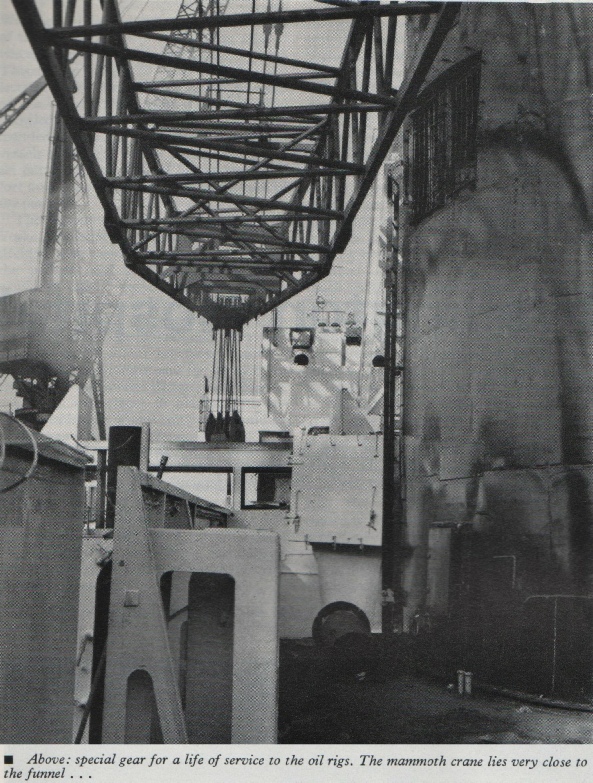 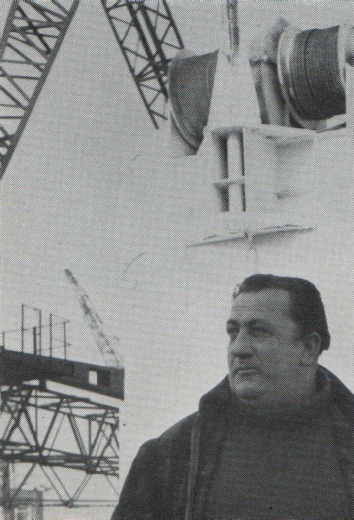 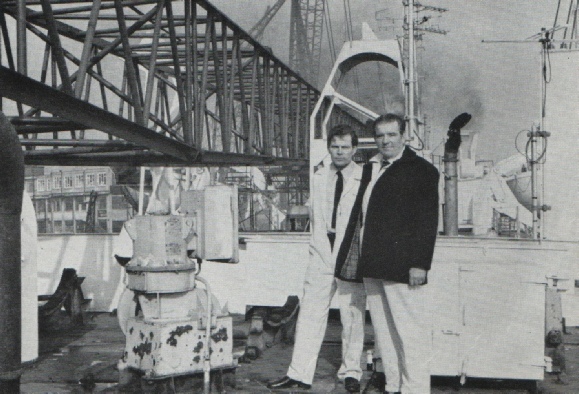 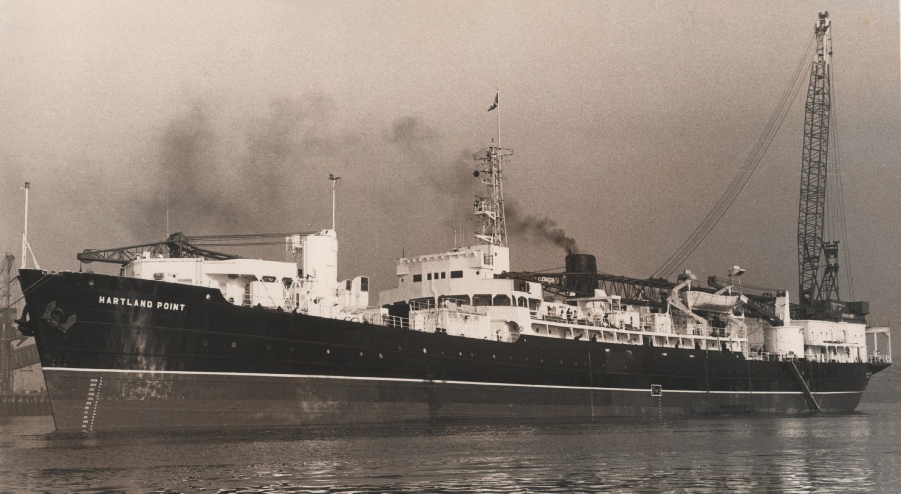 I joined her as 3/0 on the Tyne and then went out off the Tyne for sea trials which lasted forever before coming back to test the two cranes SWL .

From there went up to Invergordon to await work - but nothing came . There was talk about fitting a helipad but never materialised .

My abiding memories of my time on there was ( apart from being fascinated by the RN storerooms and working forge) was the management’s problems trying to "marry" shoreside management with M.N. structure - shoreside not too happy about us wearing uniforms !!

Still have the press handout once we had passed our sea trials and were open for business .

Quite an experience albeit a short one - a month or so. I paid off in Invergordon to catch the train down to Penzance but that is another story .

The project was very much a Scottish brainchild and B & C only provided the maritime crew. The Management made numerous errors of judgement and only made losses. The B & C Tech. Dept were called in to try and rescue the organisation, an absolutely hopeless task.

I was personally transferred from Tech. Manager, Union-Castle, to General Manager, MOIRA and spent about 3 weeks trying to find work for the ship and another 3 weeks working with the Receiver, after insolvency, trying to sell the assets!

She was bought from the Royal Navy and towed to Swan Hunter on Tyneside where the crane was fitted plus other modifications for MOIRA.

Six Thames barges had been bought, towed up to Cromarty Firth and filled with concrete. MOIRA consulted with local bigwigs re the moorings and eventually these barges were sunk with chains and buoys attached to form fore and aft moorings for the ship, this after divers had water blasted depressions in the sea bed. Unfortunately the agreed location in shallower water reduced the potential market for North Sea oil rig repairs by about 50%. 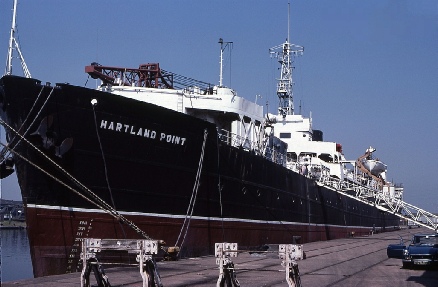 We brought her round to the Bidston Dock, Birkenhead, and offered her for sale. I returned to Southampton and my real job but was called up to Birkenhead to meet potential buyers. I think she went to scrap eventually.

There was never a helipad, I had drawings and considered building one merely to keep the workforce busy. The Manitowoc crane was only leased and could not work port and starboard, only astern, for stability reasons.

She was only ever moored off Invergorden but never attracted any work. The workforce were first class and there were no trade Union problems but the management was abysmal.

I could write a book about this ill conceived project! 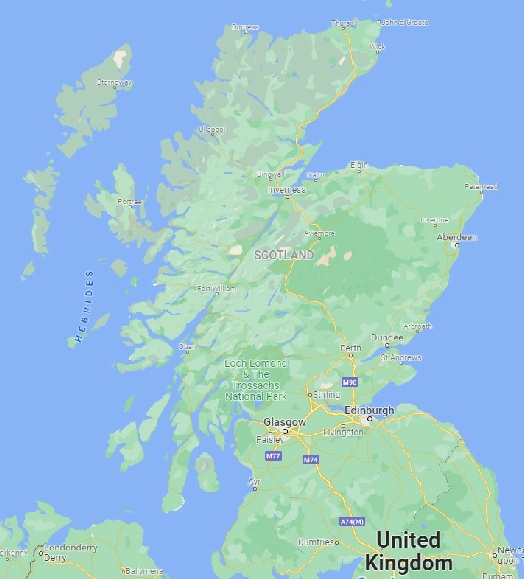 Served as 3/O for a few weeks.

Only way to get from my cabin to bridge without going over deck was through the engine room.

Enjoyed the rat hunts in the evening organised by John Duckworth, the R/O.

Had the most amazing sanitary system. The whole focsle had been converted to ‘heads’

Did two weeks on her we never did much, all sorts of different people on her, catering and cleaning companies and the guys who manned the crane, they lifted it up and down a couple times a week

Left her joined the Reina in Southampton for the scrap run.