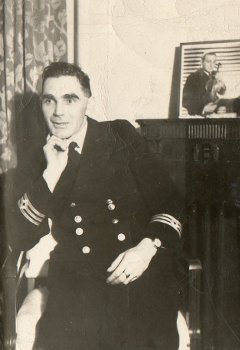 Gwilym Clifford Morris (known as “Cliff”) was born in Newport, South Wales on the 28th February, 1906 and commenced his sea career in 1924 as a Ordinary Seaman.

Following his survival from the sinking of the King Gruffydd he continued his war service as a chief officer with King Line Ltd - Managers Dodd Thompson & Co Ltd, survived the war and later gained command of the Manitou Park in October 1945.

Sadly, he died through Peritonitus in February 1948 and was survived by his wife Winifred and a 2 year old son.