The 30th August, 1888, was another day of terrible disaster and excitement. When darkness fell on that Wednesday evening over Port Elizabeth, there were eleven splendid sailing vessels anchored in the Bay and by six o'clock on the following evening, eight of these were lying helpless wrecks ashore within half a mile of each other.

Just before dusk it was evident that some foul weather was to be expected, for the wind had veered round to the south-east and later in the evening had developed into a gale that set windows rattling and slates flying about town. In the early hours of the morn, rockets were fired from the Port Office as a signal that the services of the Life Brigade were required on the fore- shore, where the first doomed vessel, the German barque Dorthea, was heading rapidly for the shore, soon to be followed by seven others at varying intervals.

The principal interest and excitement during the day was centred on the British barque Wolseley, laden with wheat from Table Bay. The great crowd of spectators on the shore held their breath in chill suspense as they watched her come riding in on the huge billows to crash headlong into the stern of the sister wreck Drie Emmas, smashing it to pieces. At the same moment, her own foremast and sails fell like matchwood, the noise being easily heard ashore. The mainmast soon went by the board, and then her crew of about a dozen men took refuge up in the mizzenmast, as the back of the vessel was broken and huge waves were breaking all over her. The position of these poor creatures aloft became highly dangerous and had the mast snapped, they would have been hurled to instant death.

The Brigade then got busy with the rockets with which they endeavoured to fire a line across the ship, but these are apt to be eccentric at any time and at this crucial moment when they were so badly needed, the results were most distressing. Several of them went about thirty yards and plunged into the water. One rocket, after ricochetting in the water, emerged at a different angle of flight, rose high in the air and fell on the beach some fifty yards behind the spot from which it had heen fired. Luckily no one was injured by its heavy iron tube. Failing this, a small mortar from which a hollow iron projectile, to which a rope is attached, may be fired, was brought down to the beach but every effort failed to land the lifesaving rope over the ship. The situation was most distressing.

Not more than one hundred yards from the shore there were twelve men clinging to the mast of a vessel that was rapidly going to pieces in the heavy breakers that were sweeping frequently right over them. These helpless fellows were being literally bombarded with iron rockets and heavy projectiles from the mortar, whilst the spectators were gathered on the beach almost within speaking distance of the vessel. The Captain himself was ashore, nearly demented, for out there with the men on the wreck were his two sons.

At long last a line fell next to them but the poor victims, now numbed with cold and exposure and hanging on grimly, had not the power to disentangle it from the riggings where it had fouled. Then one of the men was seen to drop off the mast into the sea, having the line attached to his waist; men waded out from the shore as far as safety would permit in order to haul him in, but he was washed out on the tide and lost sight of. One man very gallantly went into the sea 0n horse- back; his horse was promptly knocked over by a breaker and soon horse and rider had to swim for their lives.

Another line was subsequently fired across the Wolseley but to no avail until eventually communication was established from the broken hull of the wrecked Drie Emmas close by, and by means of a basket, the exhausted crew were got safely ashore. 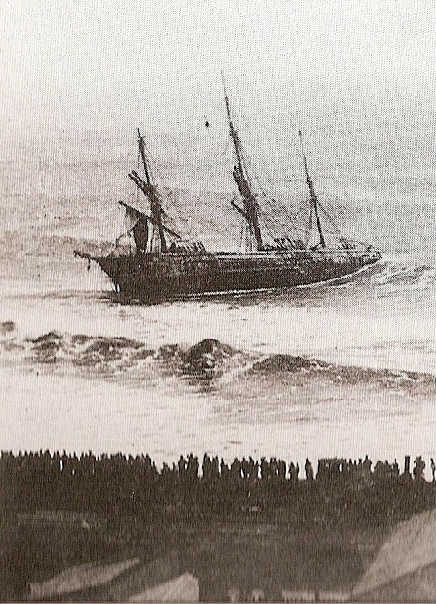 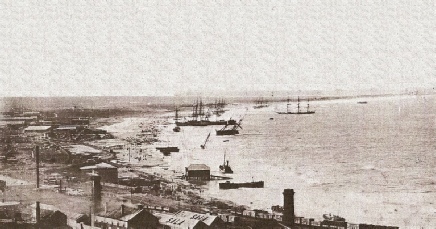