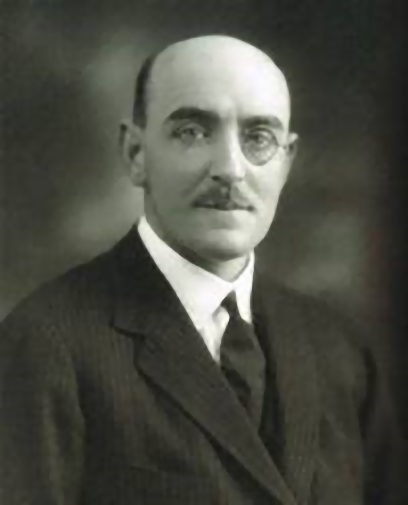 Sir Herbert Robin Cayzer, 1st Bart of Tylney, Baron Rotherwick (1881-1958) was the fifth son of Sir Charles Cayzer, 1st Bart. and probably the most dynamic of his offspring.

Having completed his education at Rugby in 1899 he soon joined the Glasgow office of Cayzer, Irvine & Company where he learnt, from the bottom up, how the business operated.  He and his elder brother, August, not only shared a flat together in the city but took part in many extra-curricula activities together while at work they were firm allies.    Herbert's extrovert personality and ability to mix well with others led not only to a successful career at Cayzer, Irvine but also to one as a Member of Parliament and as a soldier during the First World War, where he was mentioned in dispatches.

In 1916, following the death of his father, he became Vice-Chairman of the Company assisting August, who had assumed the chairmanship.   In the ‘Khaki Election’ of December 1918 he was returned as the Conservative M.P. for Portsmouth South becoming a popular figure in the constituency where he ensured that the former Naval dockyard was reutilised to refit the Company’ fleet, thus providing work for hundreds of men.   He championed British shipping in the House of Commons very effectively and, in 1932, when they formed the Shipping Committee he was its obvious chairman.  Having been nominated for a baronetcy by Stanley Baldwin in 1924 for political services to the Conservative party, he was made 1st Baron Rotherwick in the King’s Birthday Honours in 1939 in recognition of his services to shipping.

A year after the outbreak of the Second World War, he was made President of the United Kingdom Chamber of shipping where he argued strongly for the safe passage of the merchant navy, “our lifeline”, without which “the fighting services will be unable to function and our civil population will starve”.

Upon August’s death in 1943 he became Chairman of the Company and under his watch it was transformed:  not only did he anticipate the advent of air travel, with all the complications it would bring to a traditional shipping company, but he presided over the amalgamation in 1956 of Clan Line Steamer and the Union-Castle Mail Steamship Company, known collectively as British & Commonwealth Shipping.

Upon his death in 1958 his nephew, Nicholas succeeded him as Chairman.