Patrick O’Sullivan, known to all his friends and shipmates as Paddy, went aloft on 3rd March 2015 aged 68, and was buried in his home village of Verwood.

He was born in 1946, and went to sea as a Cadet with British & Commonwealth in 1966, remaining with them to the rank of 2nd Officer in 1982, taking all his certificates at Warsash. He sailed on both the cargo ships of Clan Line and the passenger ships of Union-Castle, including their cruise ship Reina Del Mar.

He joined the BT cableships based at 203 berth, Southampton in 1983 as Navigating Officer.

Through the company’s transitions from BTI Marine Services through BT (Marine), Cable & Wireless Marine, and finally Global Marine, Paddy rose through the ranks and all the cable working experiences as a normal ship’s deck officer, Offshore Superintendent on chartered vessels, and beach master on new shore ends in a number of exotic locations around the world, until serving as Relief Master.

He took early retirement in 2002 when Global Marine suffered a financial downturn and offered voluntary retirements to a number of staff. I sailed with Paddy for a short period before I came ashore, then saw him during cable projects, reunions and latterly Sea Pie Supper. He was short in stature, but you were always aware that he was there. He always seemed to have an endless supply of energy.

I asked mutual friends for memories that I could add to this article, and here are a couple of edited quotes from two fellow Cachalots, which I could not put better myself:

“I knew Paddy from when he joined BT. He was a small man with a big voice. He was a highly professional seaman and officer and always a gentleman. He took a lot of ribbing because of his diminutive size but always with a smile and often a suitable reply. A great asset to any company, I always enjoyed sailing with him, which I did many times. He also enjoyed doing beach shore end work, I know he did all the shore ends for Turkey Domestic and another system out in the Caribbean. He was able to work with just about anybody and get the best out of them. To sum up, he was a popular and competent officer and a good friend, and he will be much missed.”

“Paddy was with me as Chief Officer on the Sir Eric Sharp in Bermuda for about two years from 1998 to 2000. During that time we serviced and laid cables throughout the Caribbean. On one occasion Paddy was put in charge of hiring a local landing craft and turning it into a mini cableship so that we could repair a cable over the reef at San Juan, Puerto Rico.”

For myself, he was a real pleasure to have known, and I will always remember him as one of life’s great characters. 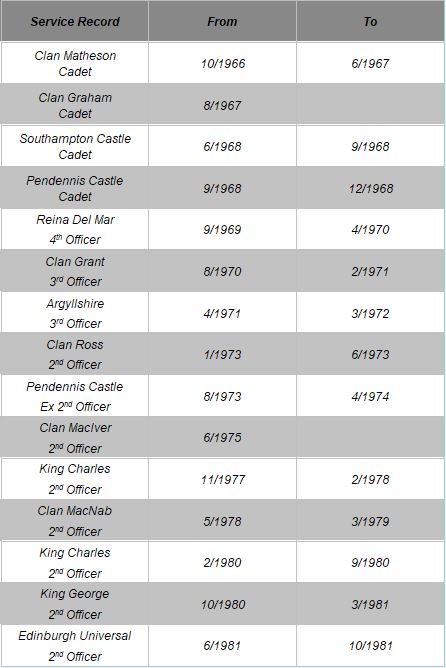