A comparatively brief sea faring career with outstanding memories of a wonderful privileged life that gave me perhaps the most satisfying period of my working life.

It produced a host of friendships that have grown stronger over fifty years and which continue to grow through the Union-Castle Pursers’ Association.

Whilst Second Purser on Edinburgh Castle, the Nursing Sister Betsy Mullineaux  and I became engaged and  were married on my return as Purser on the final East Coast voyage of Braemar Castle in December 1965.

Following our marriage I made the decision to ‘Swallow the Anchor’, but after a year with Barclays Bank followed by 18 months as Bursar of Lucton School in Herefordshire, I returned to Union-Castle working in Rotherwick House Passenger Dept. and Greenly House Pensions Dept.until 1977 when I left to take up an appointment as Bursar of Alleyn’s School in Dulwich where I remained for the next 20 years.

In the summer of 1977, together with Colin Dellar, Graham Donald and the late Mike Irwin, all of of us having worn the Pursers department braid at some stage of our careers, we met up in a  Greenwich wine bar and over an extended lunch floated the idea of a “Pursers’ Association”

Our aim was to perpetuate the memory of our time with Union-Castle by organising reunions of our former shipmates every third year.

Very pleased to report that ex Purser, Mike Morley is a recipient of the Merchant Navy Medal in 2018 for services to a maritime charity. 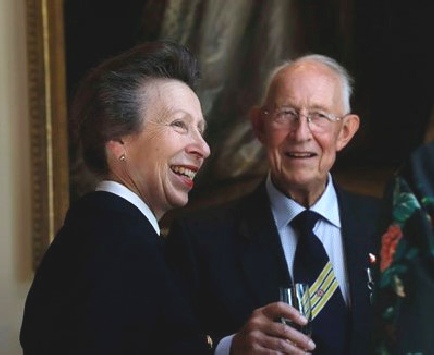 The first of these occasions was held at the Albany Hotel in Southampton following the return of Windsor Castle to UK on the conclusion of her final voyage.

Approximately forty former Pursers’ Dept. Staff with their spouses and a few shipmates attended this gathering and laid the foundations for the future. Helped by advertising in the Clansman, the word spread quickly and our contact list grew to a total of approximately 550 and it has remained around this figure to the current day despite the loss of colleagues who have ‘gone aloft’. From that first gathering, our numbers have grown and we now anticipate over 250 turning up for a night of reminiscing and revelry when we hold the Southampton events

1980 “Boffin” Baker Presided with Bernard Cayzer as our Principal Guest.

1983, Allan Cook who succeeded “Boffin” as the last Superintendent Purser in the company was elected to be our lifetime President’

1990  Our first reunion in South Africa. More than 50 flew out from UK to join shipmates resident in SA at a Braaivleis at the Groot Constantia Estate and a New Year Ball at the Mount Nelson Hotel. Harry Riddell Presided on this occasion and John Tunstall took on the role of Hon. Secretary (SA)

It was during this reunion that we resolved to hold the next South African Reunion to celebrate the Centenary of the amalgamation of the Union and Castle Lines in 2000.

1999/2000  On the back of our Centenary plans, through Caledonia Investments, Union-Castle Line was temporarily re-launched for the charter of the P&O vessel Victoria for a celebratory Centenary Cruise circumnavigating Africa. The late David Haynes (former Chief Officer with U-C )and at that time employed as Manager of Union-Castle Travel in London was responsible for much of the preliminary work that led to the successful outcome of the cruise.

Almost 100 travelled out to South Africa by sea and air to enjoy a memorable programme of events, which included a Welcome Dinner, a Braaivleis, a New Year Ball and a cricket match Union-Castle v The Mount Nelson Hotel. Sponsored by the Mount Nelson who put on a marvellous luncheon buffet at the Ohlssons Brewery ground at Newlands, Union-Castle won the game and the team and spectators were then treated to an evening reception at the Mount Nelson. The tremendous success of this reunion could not have happened without the hard work put in by John Tunstall (former Purser) and assisted by John Foley (former Radio Officer)

2003 – 2012  Resulting from the popularity  of the Centenary Voyage of “Victoria” we have organise 4 further voyages, held every third year which have been based on the P&O World Cruise Itineraries.  Three of these from Australia and one a circumnavigation of South America. Our group arrangement has attracted parties of approximately 30 taking advantage of the beneficial rates we have been offered by P&O.

2012. Jamie Cayzer-Colvin accepted our invitation to assume the Presidency of the Association on the demise of Allan Cook

2013  Sept. 28th will be the next Pursers and Shipmates Reunion at the Holiday Inn Southampton.