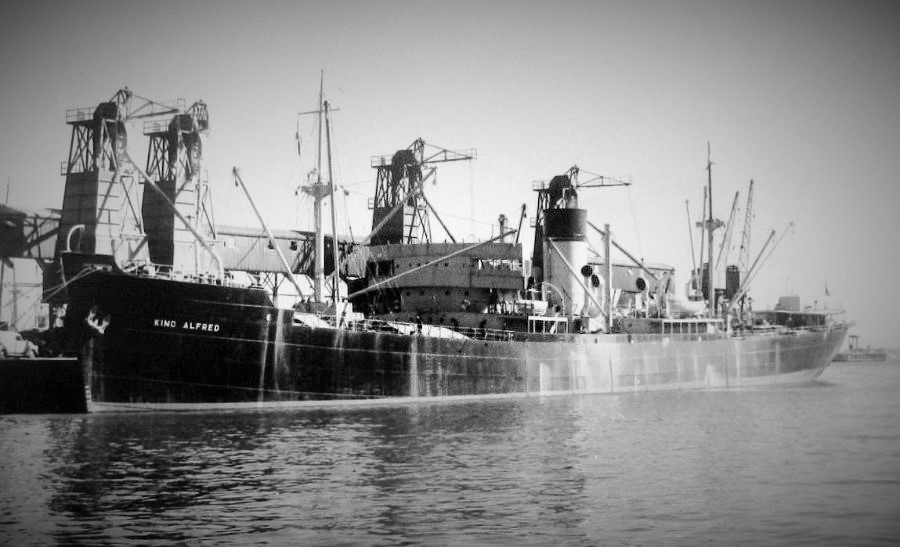 I'm pretty sure he was there on the preceding voyage, no idea about the following one, so commanded her from 1956, if not earlier.

Chief Engineer with him was J. Lyle.

Rather a hellish voyage, King Line Master, Chief and 2nd Engineer, Chief Steward (who was B useless), and Cook who wasn't much better.

The remainder of engineers and crew were all from the Liverpool Fed. pool, and oh a Marconi Sparks.  10 months of conflict!!

We lost Junior Engineer Jack Jenkins due to a  gangway accident in Port Pirie, South Australia, in December 1957, just before Christmas.

We believe he tripped and fell from the top of the B.O.T. gangway, hit the edge of the quay and entered the water. Jack Isbester recovered him from below the surface after several diving attempts, he was taken to hospital but did not survive.

The King Alfred was moved to the outer anchorage to complete loading to her marks. We were ferried back to attend his funeral and burial in the Port Pirie Cemetery prior to sailing back to Avonmouth.

In those days, the single track railway ran down the center of Ellen Street in Port Pirie, quite a feature of the day.