She was launched on 15th July 1935 by Mrs Robertson Gibb, wife of the Chairman, and sailed on her maiden voyage on 7th February 1936.

She completed her first voyage in the scheduled time of 16 days 15 hrs but, capable of 21 knots if required, did the run in 13 days 9hrs in the following August and beat the record established by Union's Scot in 1893. 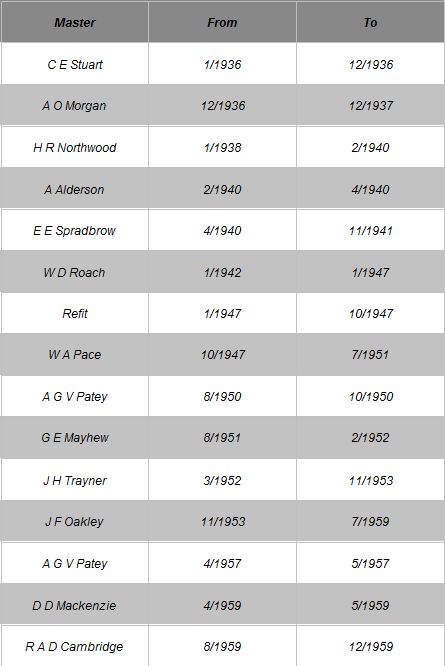 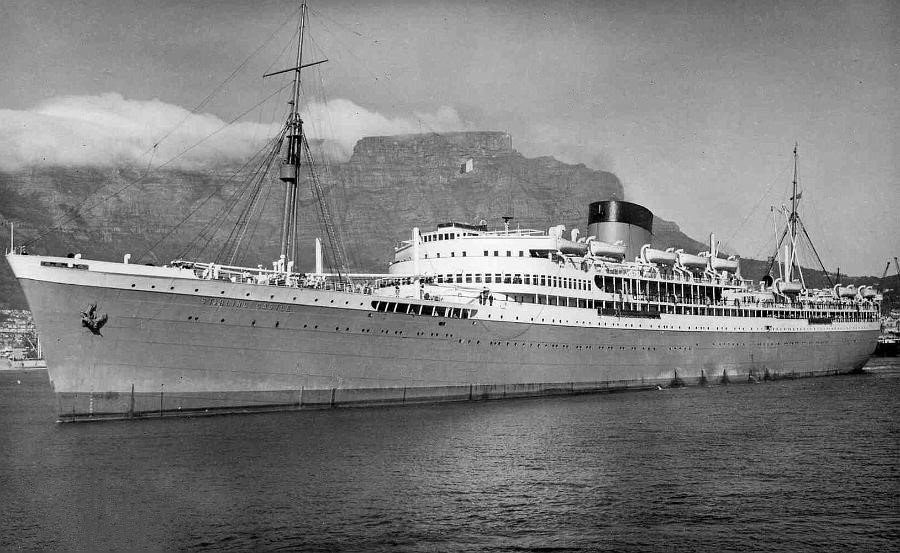 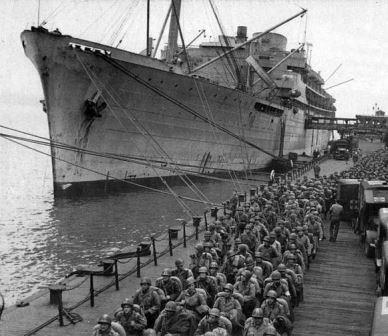 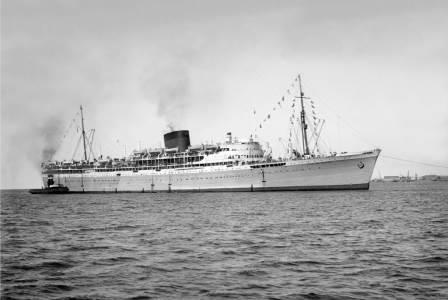 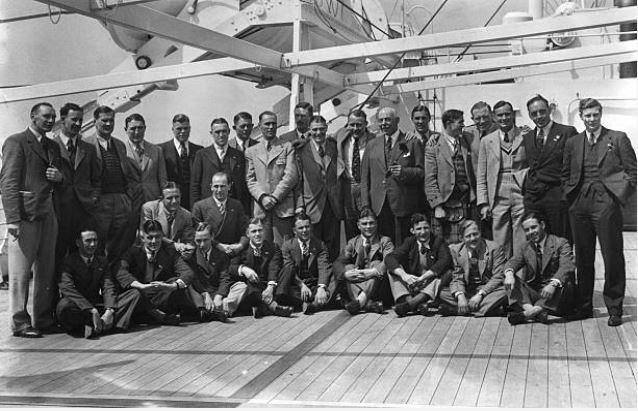 The players and officials of British Rugby Team depart from Southampton 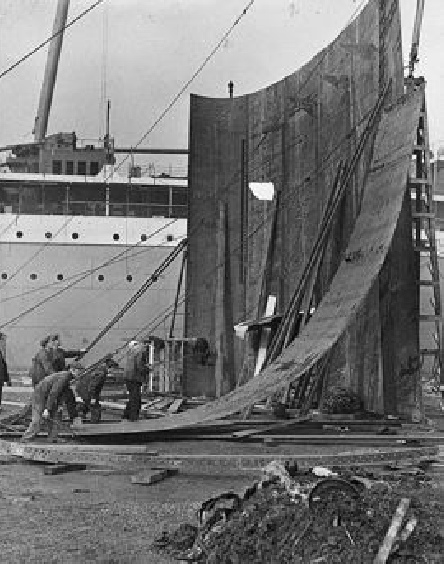 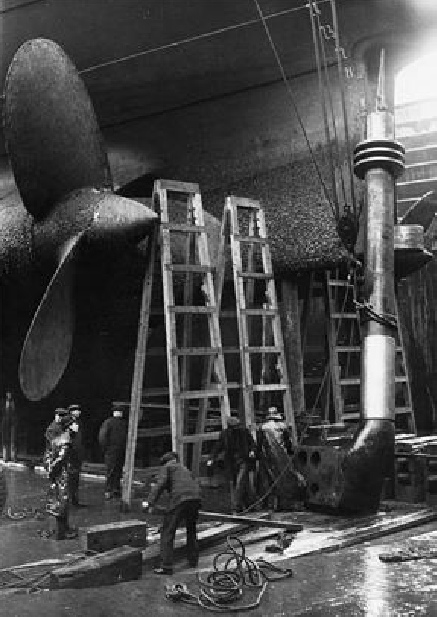 9th October 1935:  Shipyard workers constructing the funnel for the new liner, the 'Stirling Castle', on the quay at Belfast's Harland and Wolff shipyard

Hoisting the rudder stock into place

The Building of Stirling Castle 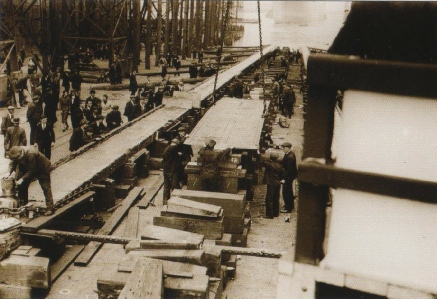 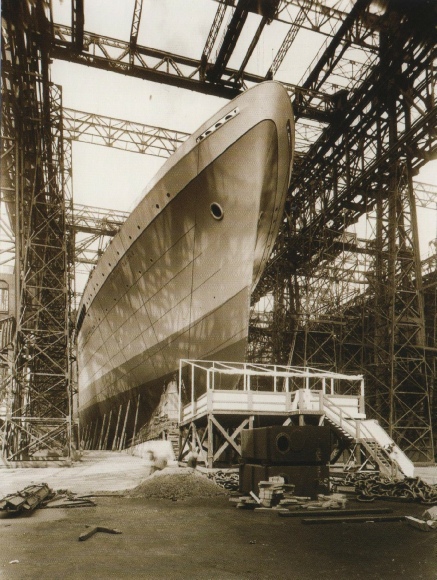 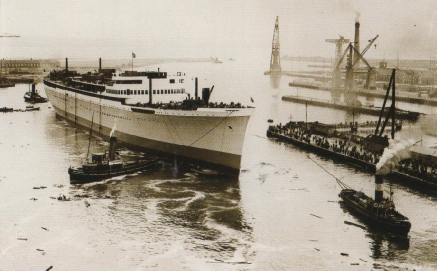 Ready for the launch ceremony on 15 August 1935 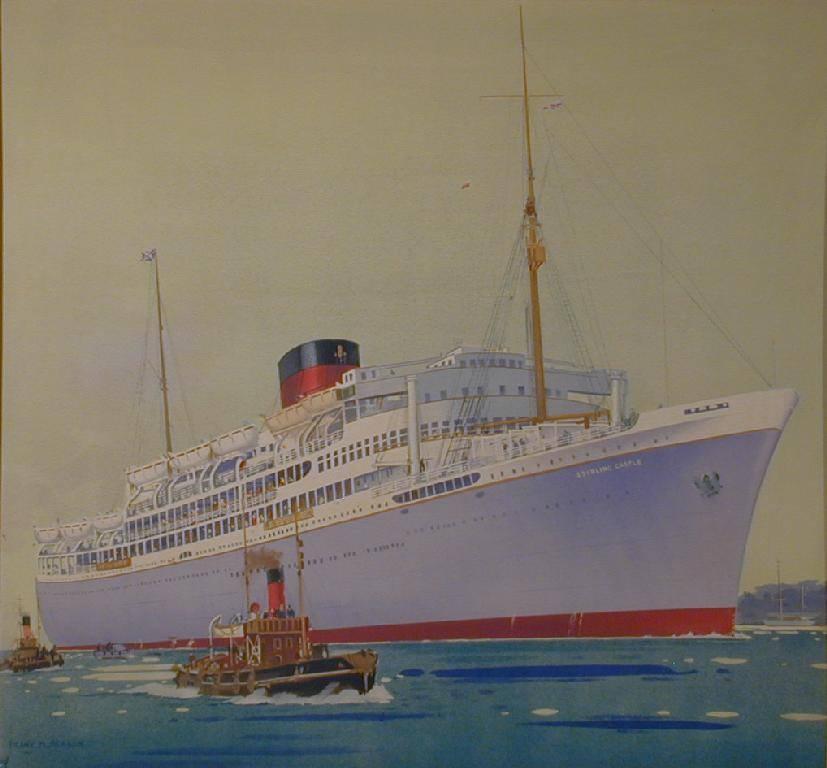 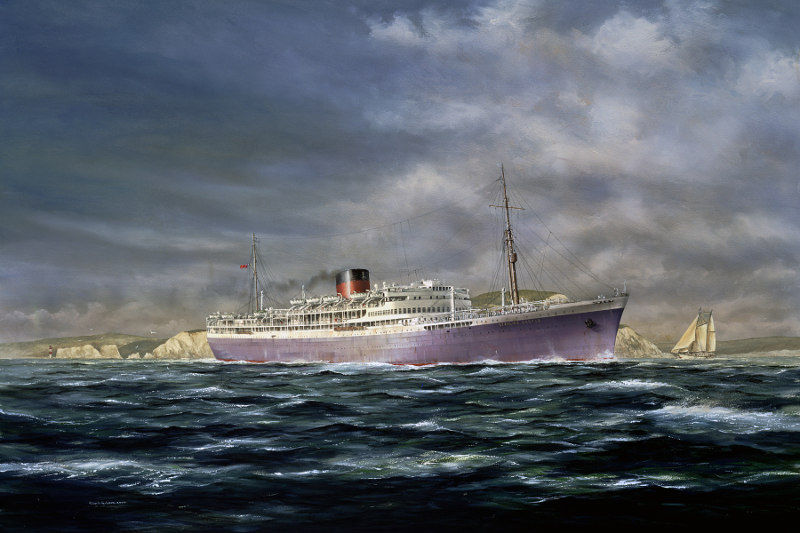 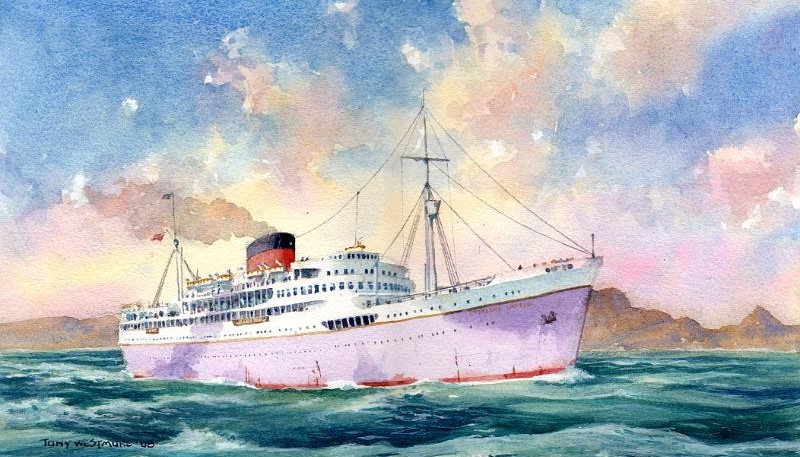 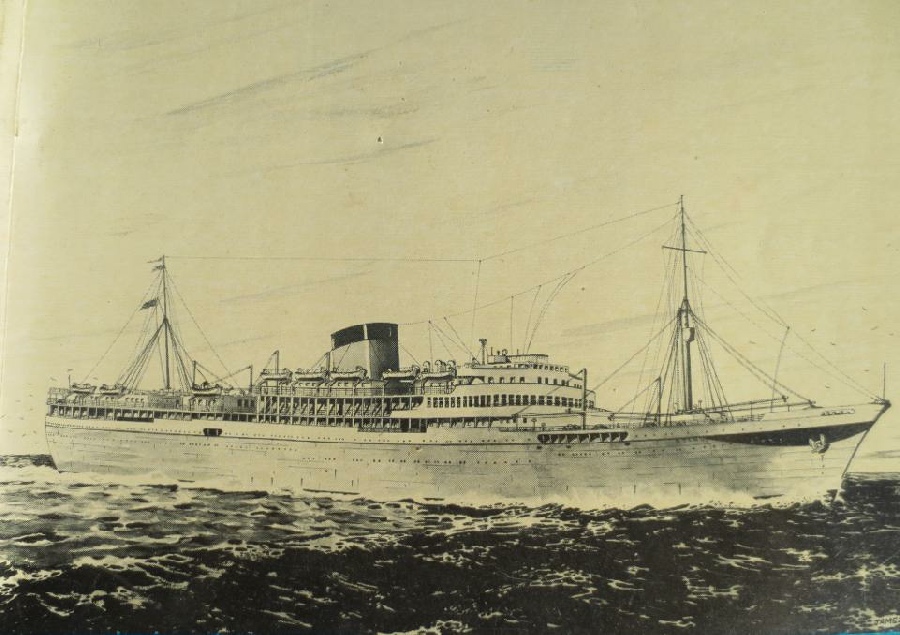 In 1506 a Portuguese sea-captain called Tristao da Cunha came across a group of six little islands far out in the Atlantic between South Africa and South America. The largest of them, which he named after himself, has a volcano in the middle. The British annexed the islands in 1816 and a population slowly formed from members of a temporary British garrison, shipwrecked sailors and other Europeans, as well as women from other islands. By 1886 there were 97 inhabitants, clustered at the settlement of Edinburgh on Tristan da Cunha.

From August 1961 there were signs that the Tristan volcano was restless. There were earth tremors and in the following months a large fissure opened in the ground behind the island’s lighthouse and a mound formed that gave off a powerful smell of sulphur and grew steadily larger.

The island’s 264 people moved to the uninhabited Nightingale Island for an uncomfortable night before a Dutch liner, the Tjisadane, that happened to arrive the next day, took them away to Cape Town. HMS Leonard arrived from the Cape on October 13th to find that red-hot lava and smoke were pouring out of the mound, which was 250ft (80m) high.

The crew collected as many of the islanders’ belongings as they could before sailing back to South Africa, but all the farm animals and domestic pets had to be left behind. 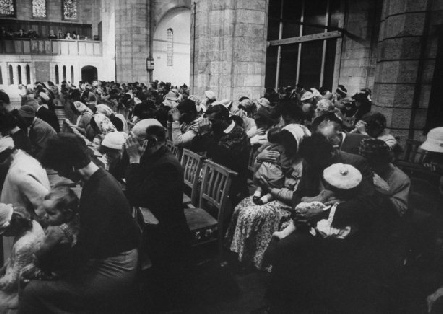 The islanders were soon taken on to England in a mail ship, the Stirling Castle. After a brief spell in wooden huts in Surrey, they were housed at a former RAF camp at Calshot, near Southampton, where they suffered unhappily through an unusually cold English winter.

A Royal Society expedition in 1962 found that, although the Tristan crawfish cannery was no more and the islanders’ dogs had taken a heavy toll on the sheep, conditions seemed not impossible.

An advance party returned to Tristan in April 1963 and in November some 200 people, including four Tristan girls who had meantime married Englishmen, returned to their island.

The rescued islanders in church in Cape Town

As portrayed on the front covers of the South African Shipping News magazine. 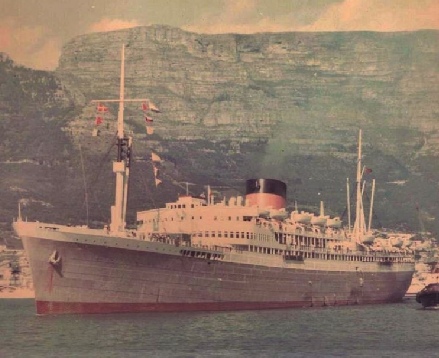 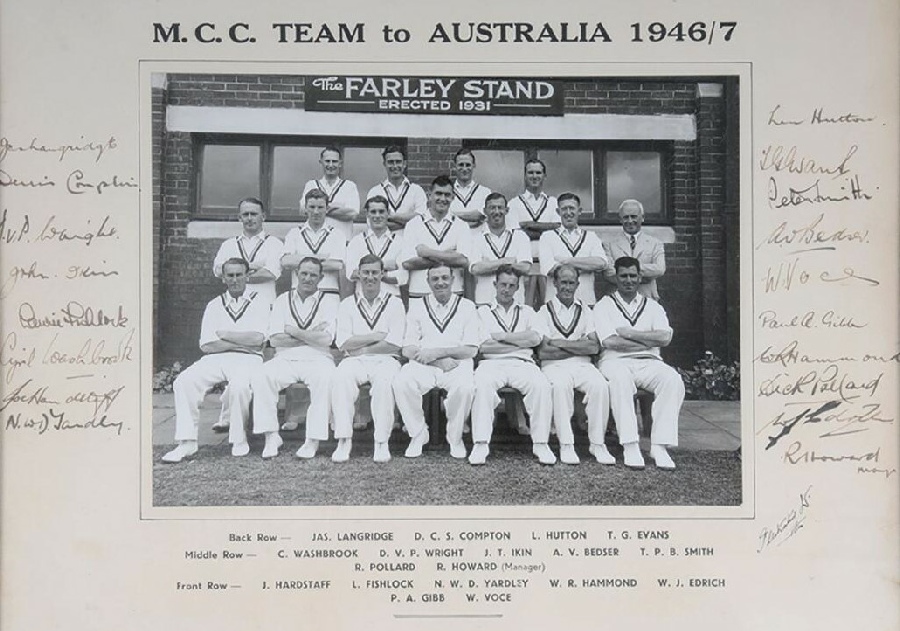 Before sailing for Australia, the players were busy hunting round for spare clothing coupons. On 31 August 1946 the team took a train from Waterloo Station, London, to Southampton Docks and sailed on the Union-Castle ship  ‘Stirling Castle’’. They made only one stop at Port Said, to Fremantle, landing on 24 September 1946.

The ship called at Colombo, but for the first time since 1903-04 did not play a match.  “Nearly a month at sea on a crowded ship run on austerity lines by the Government - no classes and no drink” {E W Swanton]

The team arrived at Perth much earlier than anticipated so an extra minor match was arranged.

After the Australian section of the tour, the bulk of the team flew by seaplane from Sydney to Auckland, then by road to Wellington for the first match in New Zealand.

Hutton flew home for a throat operation, arriving in England on 17 March.

Langridge (groin injury) had been unable to play for six weeks. With Gibb, Hardstaff, Eric Bedser (not an official member of the team) and Ferguson, he returned home in the ‘Largs Castle’, leaving Sydney on 18 March.

The main team returned by air in four groups, completed by the arrival of Hammond and Major Howard on 8 April.

Ikin had to remain in hospital at Rangoon for treatment to a septic arm wound.

In 1940 she was requisitioned for troopship duties capable of carrying 6000 persons eating and sleeping in two sessions, a capacity which was occasionally reached.

In 1941 she was kept on 7 day standby, as part of a 12,000 strong force, in case it became necessary to occupy the Azores and/or the Canary Islands and in 1943 carried troops from the US to the UK as part of Operation Bolero in readiness for the D-Day landings.

29th October 1935:  Shipyard workers at Belfast's Harland and Wolff shipyard, watch as a crane hoists the top portion of the rudder for the new liner, into place 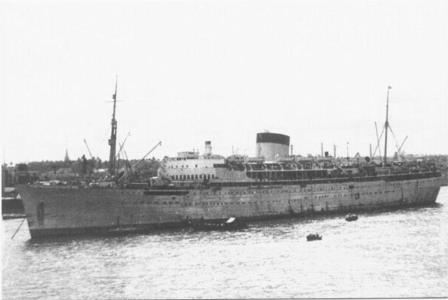 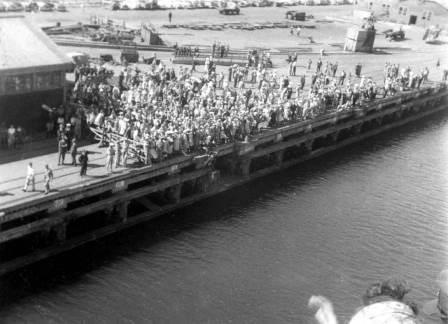 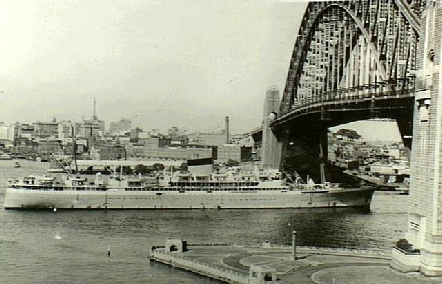 Now back in company livery

She was finally released in 1946 and underwent a refit before returning to the mail run in 1947. 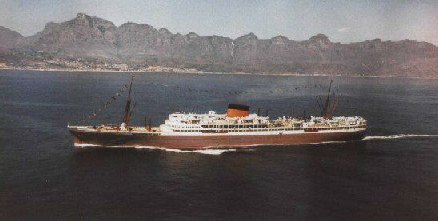 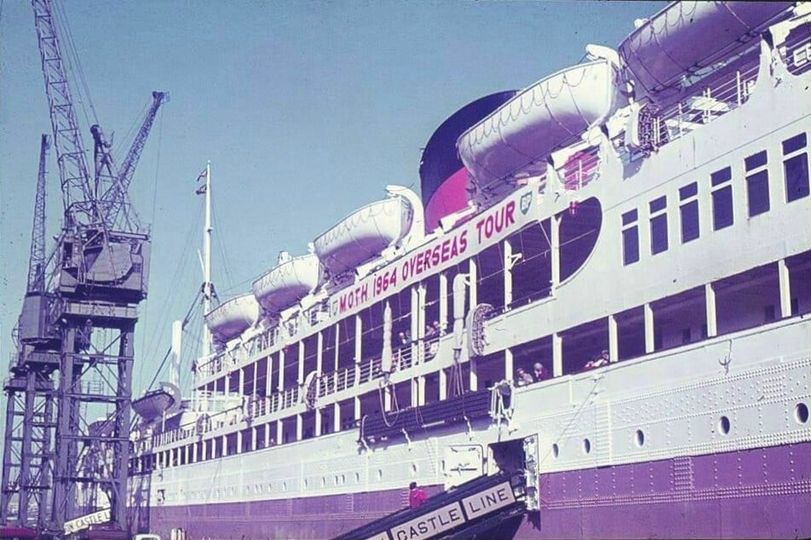 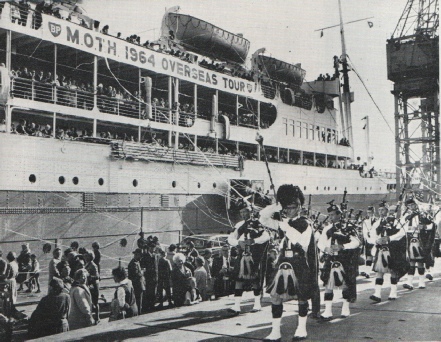 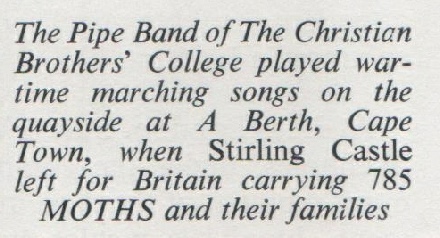 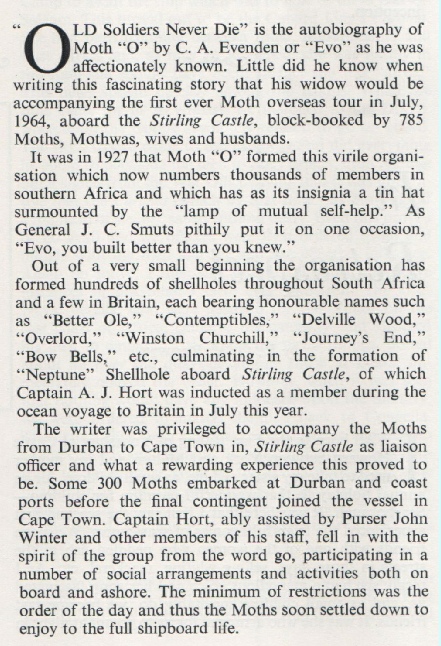 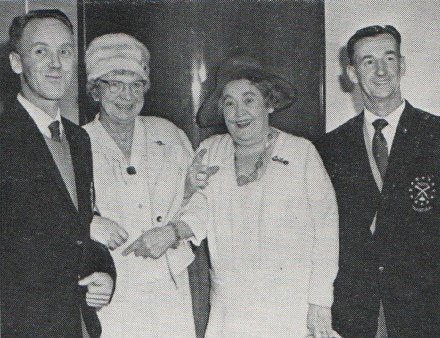 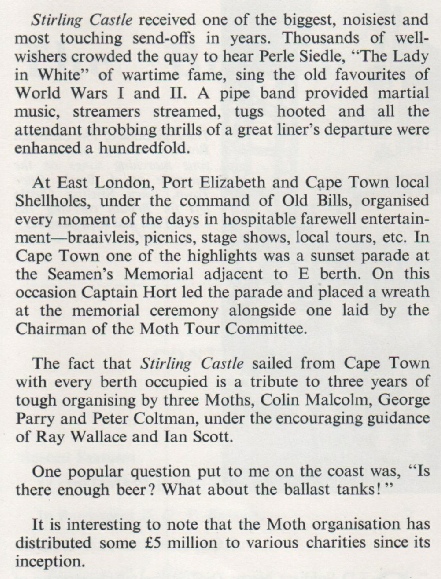 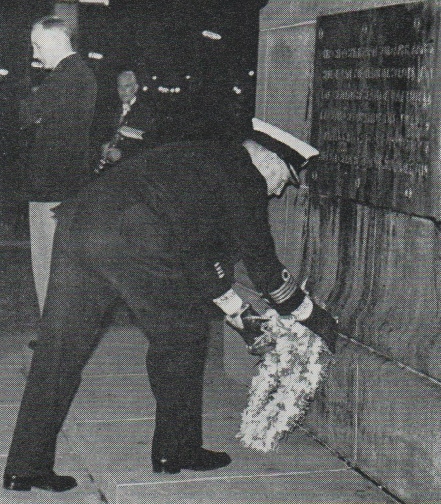 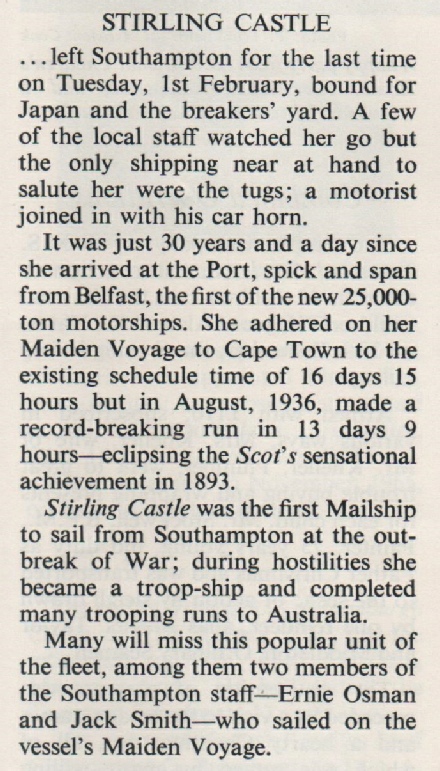 She served on the Cape run until her last voyage in 1965 when she arrived at Southampton on 30th November.

Finally left Southampton on 1st February 1966 for Mihara, Japan where she arrived on 3rd March for breaking up 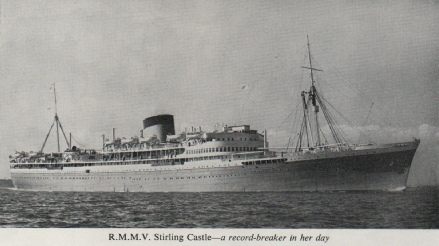