She was the largest ship owned by the company, Cammell Laird’s first building for Union-Castle and the largest liner built in England.

Replacing the Winchester Castle she completed her maiden voyage to Cape Town in 14.5 days.  That voyage time would be decreased to 11.5 days in 1965 with the accelerated mail schedule.

On 12th August 1977 she made her 124th and final sailing for Union-Castle and left Southampton with much ceremony which included an RAF fly past.

On her return she had been sold to John Latsis of Piraeus and renamed Margarita L.

She proceeded to Greece where she was converted for use as a static luxury accommodation ship at Jeddah in Saudi Arabia.

There, she was deployed as an office and leisure centre for the Petrola International S.A. construction company replacing the Marianna IV.

A special jetty was built two miles north of Jeddah with car parks, swimming pools and other sports facilities and the ship was equipped with a helicopter pad on the fore deck.

In 1983 she was overhauled in Bahrain before returning to Jeddah where she remained until June 1991 when she returned to Piraeus to be laid up.

In 2003 an abortive effort was made to save the vessel and use her as a hotel/conference centre. The effort was cursed by monumentally inept leadership by a town planner from Liverpool who resented any involvement by ex Union-Castle staff. The height of his incompetence is exemplified by his choice of sponsor. Instead of approaching any luminary with significant maritime connections his selection was none other than the actress Prunella Scales. I still gasp in amazement!!!!!!!!!! The only connection I can see between this fool, Prunella Scales and Windsor Castle is that none of them had any connection with the others. I still have a copy of the “master plan”. If anyone would like to see it then please let me know. 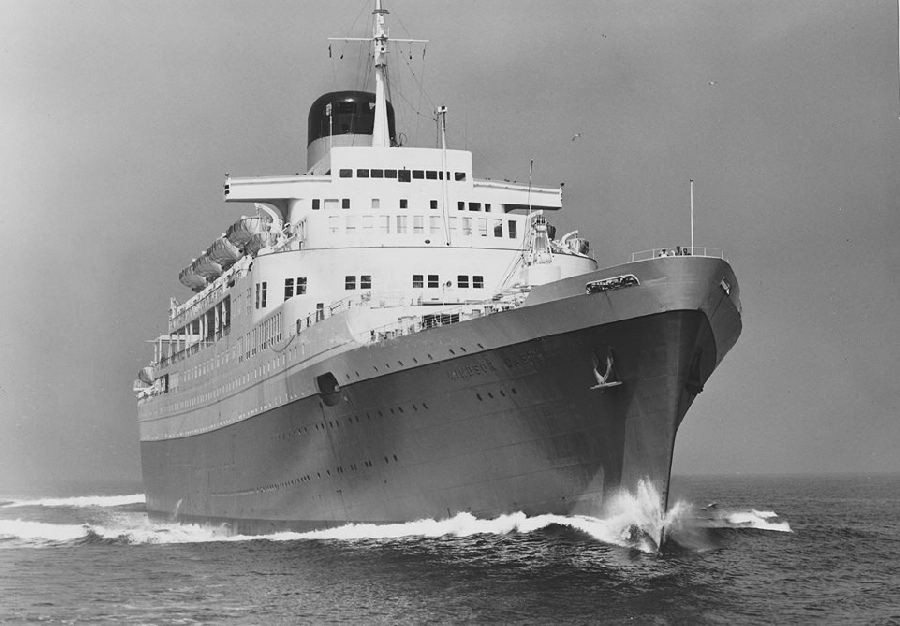 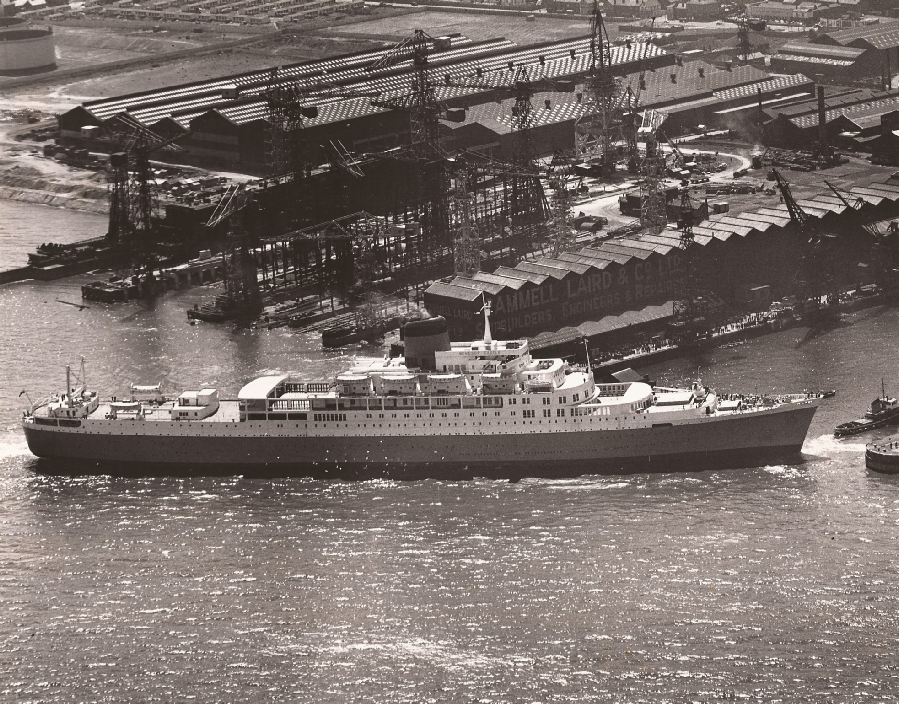 Leaving Cammell Laird bound for Southampton and the Mail Service 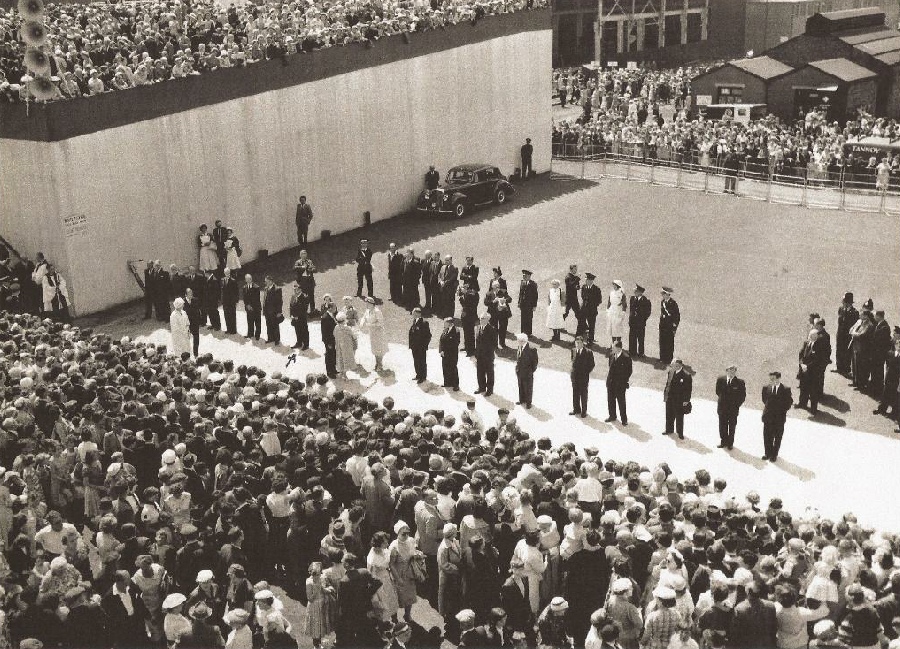 This photograph was contributed by John Davies

The launching ceremony of RMS Windsor Castle at Cammel Laird shipyard in 1960, being presented to the Queen Mother.

The Arrowed person is my father’s youngest brother Ronald Davies

Employed by Union-Castle he was a Naval Architect and the Building Superintendent of RMS Windsor Castle. 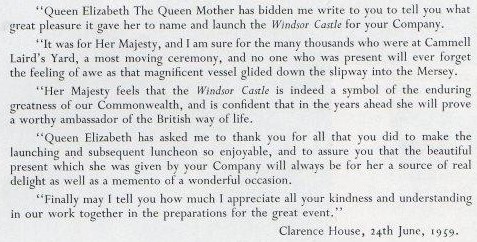 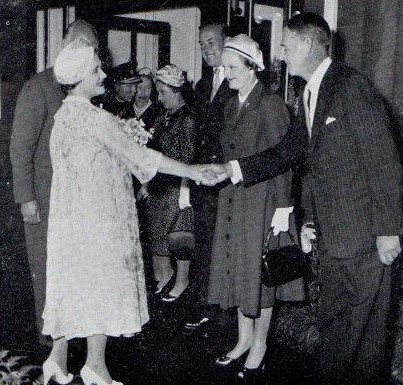 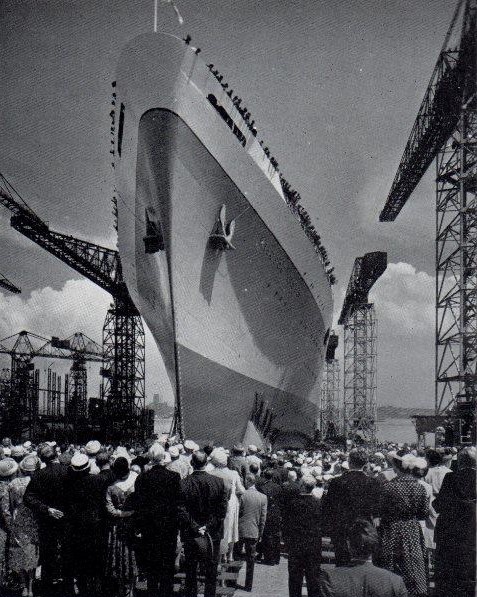 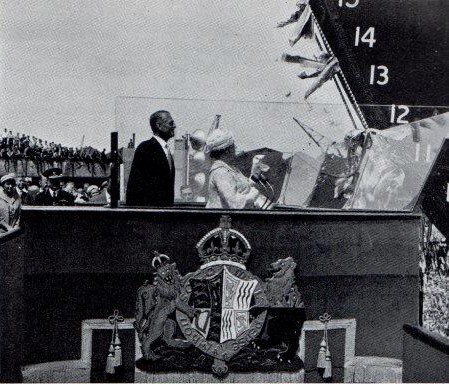 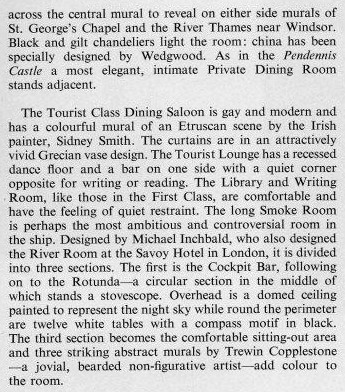 The Pursers on The Maiden Voyage

In Southampton Water bound for The Cape on her Maiden Voyage 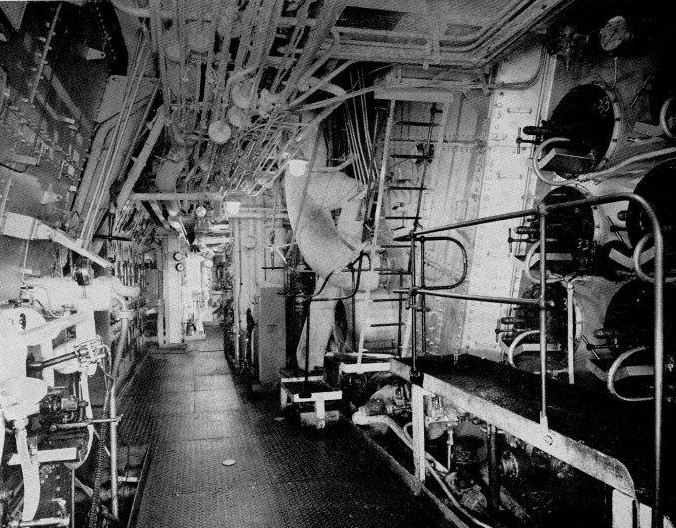 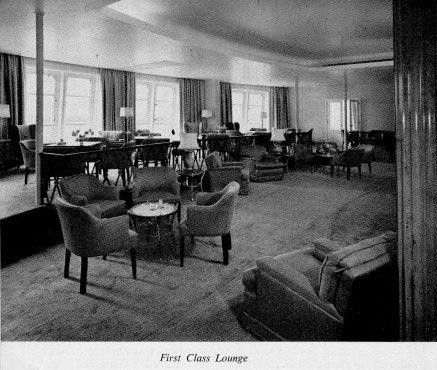 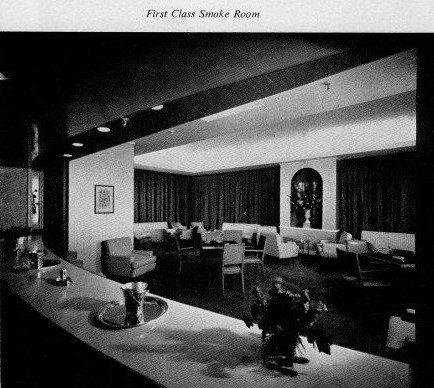 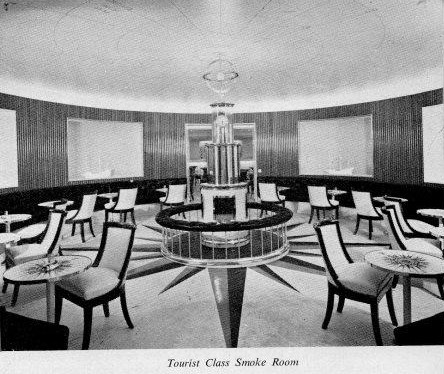 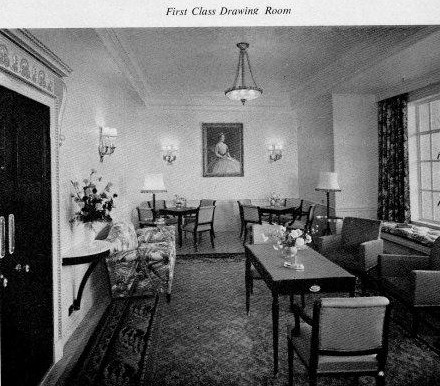 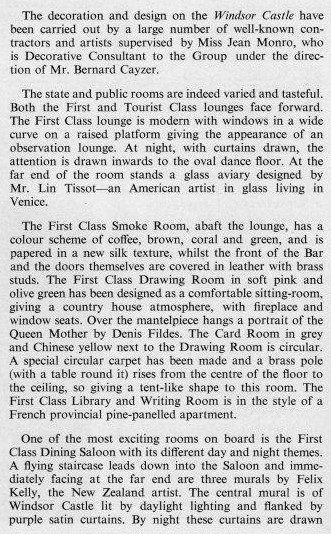 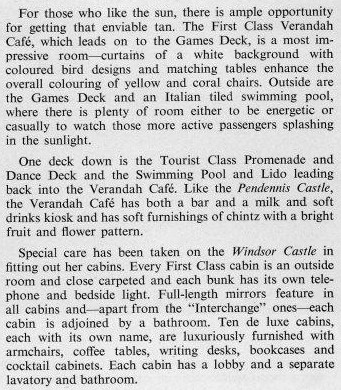 I was on the Northern Star at that time.

As a friend and I were just heading back on board we could see smoke bellowing out of the passenger lounge. We ran along the Passenger gangway and into the passenger Lounge area.  My mate put on the old breathing gear and I started pumping by foot the air line.

The supposed plan was to get in the Lounge armed with a fire extinguisher and see where the fire was. Once the Lounge doors were open it was just thick smoke everywhere. I could not breath nor pump the air line, so we quickly abandoned that idea. 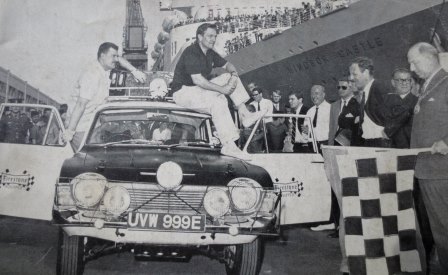 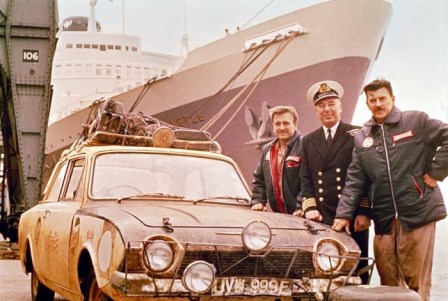 In May 1967 the RMS Windsor Castle was involved in a dramatic race from Cape Town to Southampton against a motor car.

It began after Union-Castle Line claimed sea travel was the fastest means of travel from South Africa after air.

The Ford Motor Company disputed this and threw down the gauntlet for the ship to race one of their cars from Cape Town back to England.

So the RMS Windsor Castle took up the challenge and in May 1967 raced home against a Halewood built Ford Corsair 2000E in a dramatic and nail biting race between these two Merseyside built machines.

Sadly despite the high profile nature of this race sadly press coverage was muted.

The ship and the car (with rally drivers Ken Chambers and Eric Chapman), left simultaneously from Cape Town dockside to a great send off bound for Southampton.

The liner’s 7,000 mile sea voyage was pitched against the 9,700 road journey. Chambers and Chapman had many adventures along the way. Including a moment when the Corsair fell into a 6ft, water filled pothole and had to be rescued by 30 locals and 200ft of rope.

Other challenges included petrol shortages (nuns once gave them beer as a substitute!), armed Congolese soldiers forcing frequent stops (their support team and plane were locked up for several days), plus 24 tyre changes and 37 puncture repairs.

Even, just before reaching Southampton, they were pulled over by West Sussex Police and cautioned for having a dirty number plate!

Accounting for the driver’s air travel, the race was declared a draw, although the Corsair arrived the evening before the ship sailed in.

It must be remembered that Windsor Castle could not actually “race” as she was bound by a strict timetable.

It’s a pity that Ford did not challenge one of the mini mails !

The start at A Berth in Cape Town 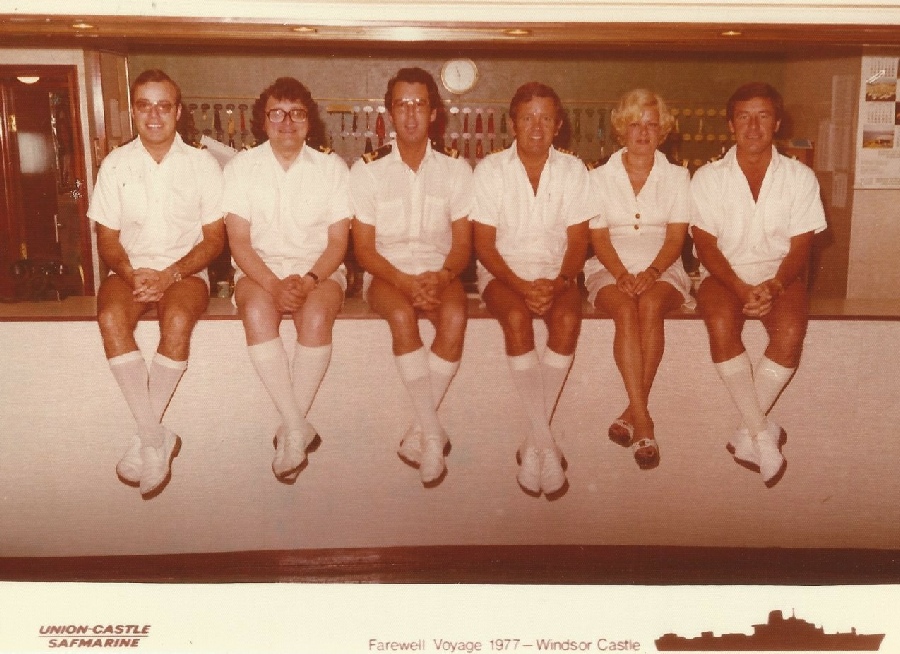 The Pursers on The Final Voyage 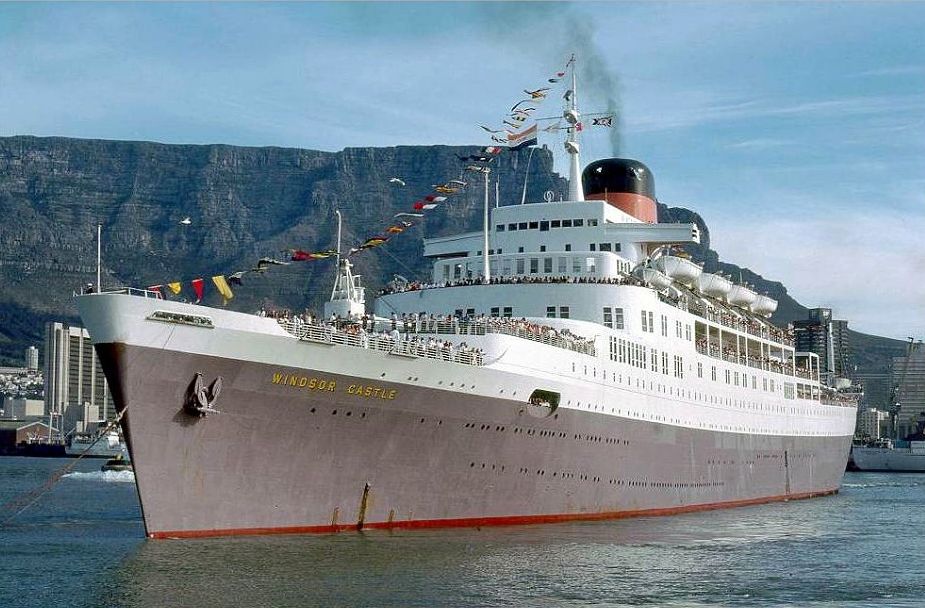 Dressed overall, Windsor Castle moves away from A Berth and out of Duncan Dock for the last time

She was bought by John S. Latsis, the Greek oil and shipping tycoon, and sailed from Southampton on October 3, 1977 for Greece.

Renamed MARGARITA L (after one of Latsis' two daughters), her new livery called for an all-white hull and a buff funnel in lieu of UCL's colors of lavender and red, respectively. MARGARITA L was converted at Piraeus for use as an 852 berth luxury accommodation ship at Jeddah, Saudi Arabia (port city for Mecca).

She was then used as an office and leisure centre for Latsis-owned Petrola Int. S.A. Construction Company at Rabegh.

In Feb 1979 she replaced MARIANNA VI (ex-AUREOL) at a special jetty two miles north of Jeddah as the center of a complex with car parks, swimming pools and sports facilities.

A helicopter pad was added aft of the former first class Promenade Deck pool area. In 1983 she was dry docked, overhauled and returned for the same use.

After 1990 she was removed and towed to Eleusis, Greece and laid up, and occasionally used as private quarters by Mr. Latsis during his visits to Greece.

What was most remarkable about the MARGARITA L was how original all of her fittings and appointments remained all the way to the end. Union-Castle silver, crockery, and linens were still used and all the furniture and artwork were left intact. 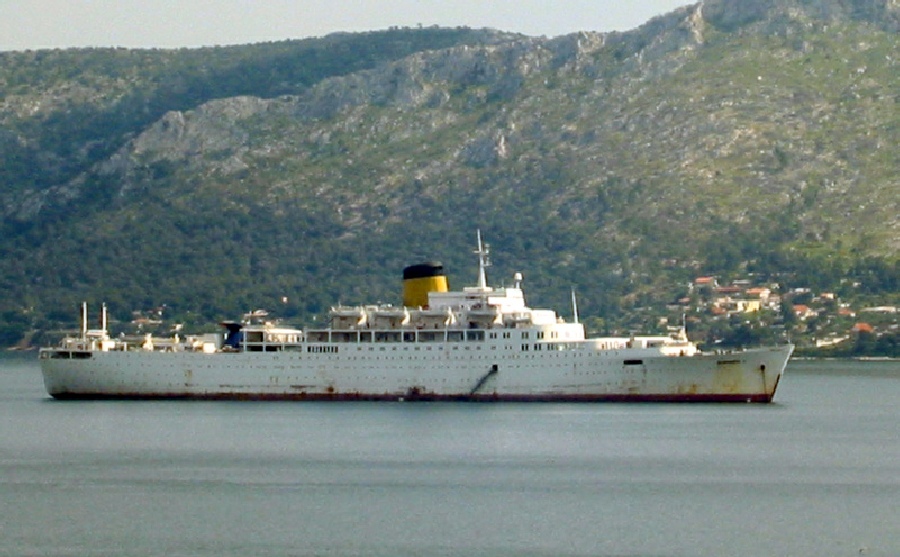 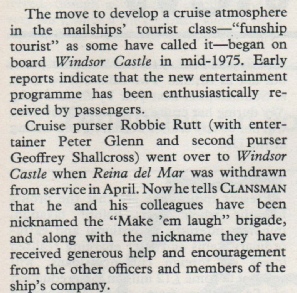 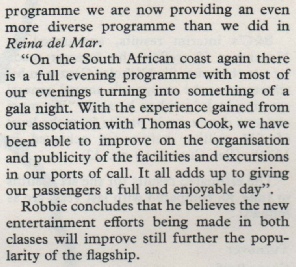 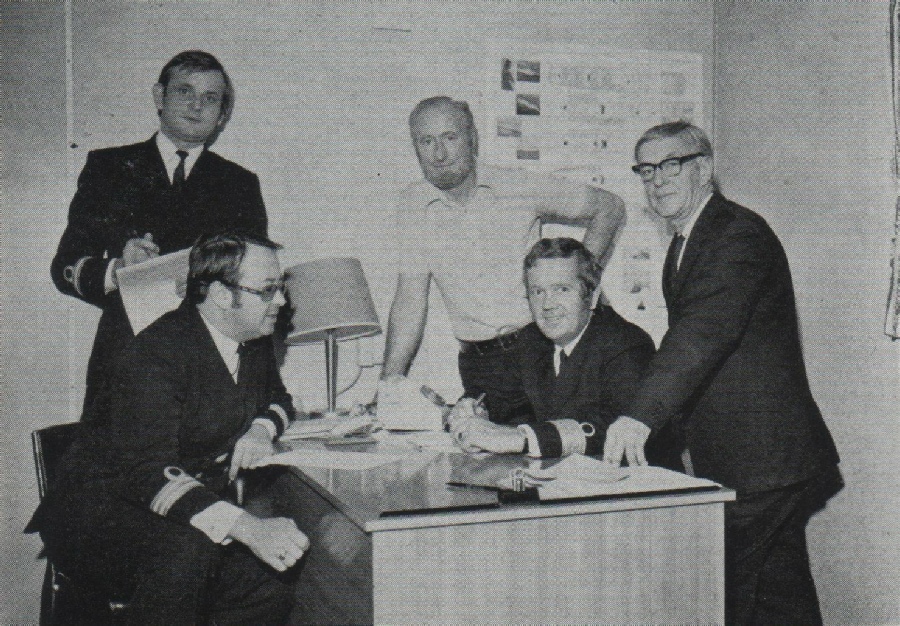 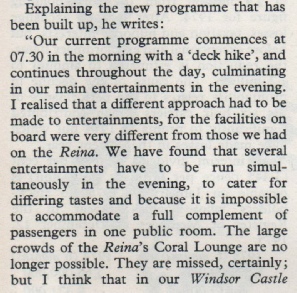 Fire aboard Northern Star in Durban - 1967

As Margarita L in Eleusis Bay

With Mr. Latsis in declining health, the MARGARITA L and three other former British built passenger vessels in his fleet were offered for sale in 1998.

Finally, with Latsis deceased and his family left with a deterioriating liner languishing off Petrola, she was sold for scrap.

Given the name RITA, she raised steam for the first time in over fifteen years and headed slowly to Alang for demolition in April of 2006.

Enroute, she broke down and went adrift in the Indian Ocean off Dwarka. The old steam tug sent to her rescue also broke down, but finally mustered enough power to drag the reluctant RITA to the beach, where she arrived on July 20, 2005. 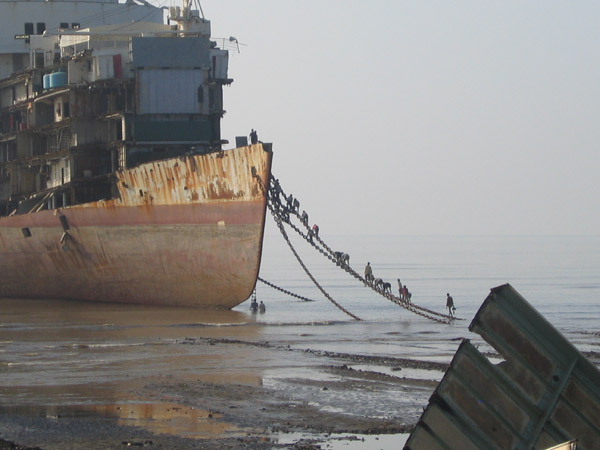 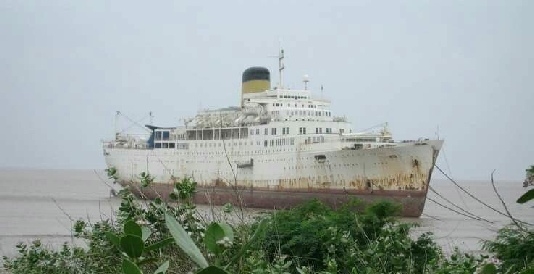 Still intact but ashore at Alang

Shortly the shore side fire crews arrived plus a fire tug.

It appears the fire started a few decks down in a Stewards locker.  I'm sure that had we been at sea she would have burnt right out and gone down.

But that wasn't the end of things to happen that trip. Leaving Tahiti we ran aground, The small tug that was trying to pull us off from the after end broke its towing line which then smash into the Tugs bridge and I believe it killed the Skipper.

It was the Captains last trip and I think he was due to retire .*What a way to go*  We did manage to get through the Panama without damage. 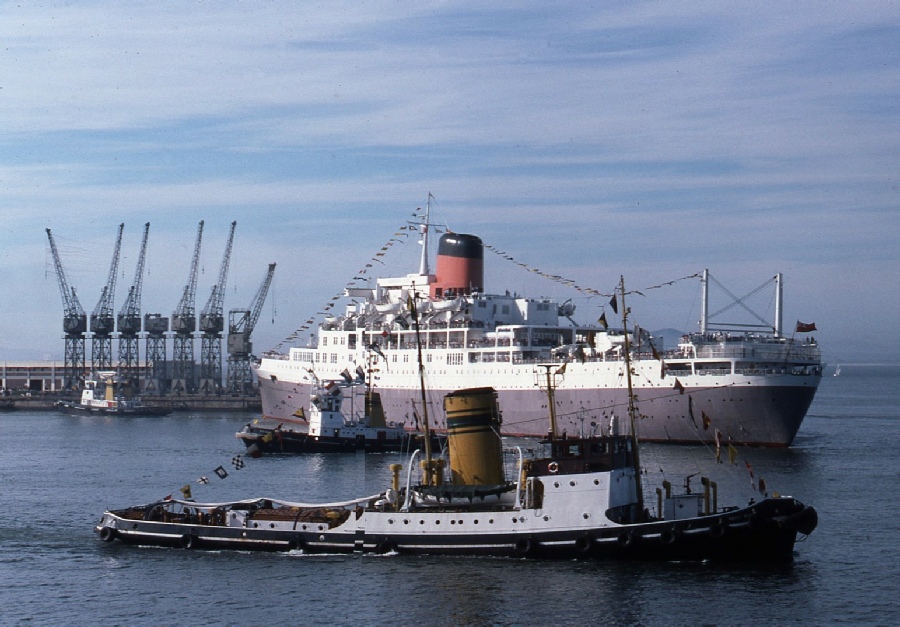 The veteran tug Danie Hugo in the forground 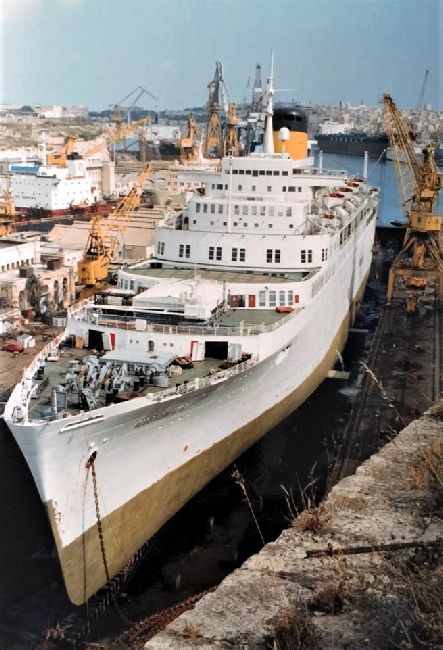 A sad end for a magnificent ship 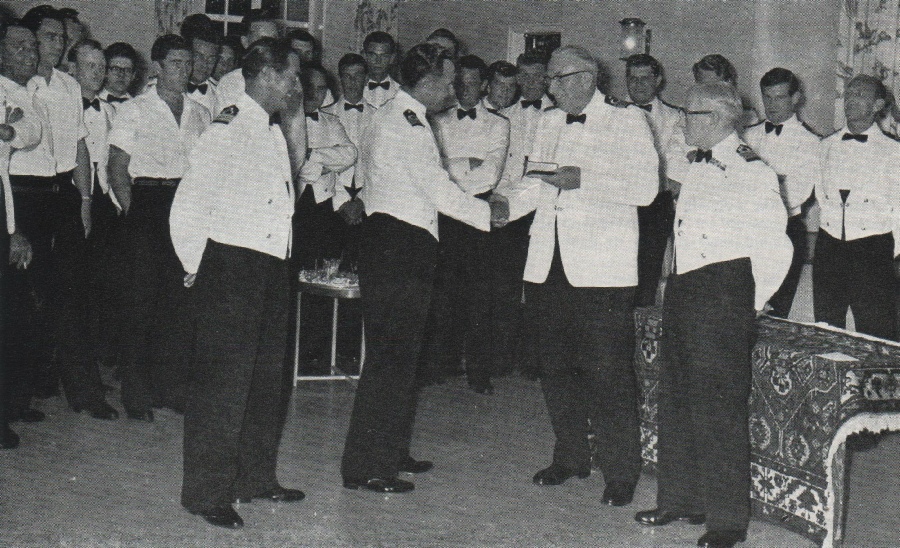