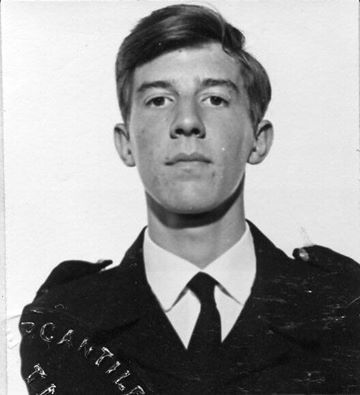 A Bell Boy’s Memories of the Windsor Castle

I joined the Windsor Castle at Southampton on the 30th October 1969 having completed 13 weeks at the National Sea Training School at Gravesend in Kent. This was to be the first of four voyages on this liner, each one lasting 5 weeks.

My uniform consisted of black trousers, black shoes a black cumber-band, a white ‘round neck’ tunic with around 20 silver buttons up the middle, mauve cuffs, collar and epaulets. I had to have a pair of white gloves pulled through the left epaulet. The ships officers wore their dark blue uniforms changing into their ‘whites’ after passing the equator and entering warmer climates. I had crossed the equator a year or so earlier when, with my parents, brother and sister we came back to the UK, from South Africa, on the SS Southern Cross so I had already had Neptune’s visit as a passenger; it was different for Bert though the crew crossing the equator ceremony was slightly more enthusiastic shall we say!

On another trip the liner carried a VIP, I think he was the one millionth immigrant from the UK to South Africa. There was a big celebration as we arrived in Cape Town. Boats and tugs of all descriptions escorted the Windsor Castle into Cape Town Docks and when we went ashore the South African Army lined his route and a band welcomed him into the country.

After my service on the Windsor Castle I then sailed on the SS Canberra around the Mediterranean from the 18th May 1970 to the 23rd August 1970 before leaving the Merchant Navy. I lost contact with all the Bell Boys and Saloon Boys from the Windsor Castle with the exception of Bert. Like me he joined the Police, I in Thames Valley Police and he in the Ministry Of Defence Police. We still keep in touch today.

The Windsor Castle’s voyage never varied, she left Southampton stopping at Las Palmas then onto Cape Town, Port Elizabeth, East London and Durban stopping at the same places on the return journey.

My favourite port was Cape Town I lived and went to school there a couple of years earlier, there’s nothing quite like the sight of Table Mountain as we entered Cape Town Harbour.

I always asked for permission to visit friends just outside Cape Town whenever I was there, which was twice every trip. I was allowed to miss the lunchtime serving which left me part of the morning and all afternoon free. It was not easy to get this time off. I had to report to some of the senior officers, which I think also included the Chief Purser to put my case but in the end I was always granted it.

The first trip was all very new to me - a new job and uniform and a totally new way of life. Whilst at sea we were always very busy and when we weren't working we slept, sunbathed on the crew’s deck which was located at the very front of the ship or went to the crew’s pub in the evenings I can't remember what it was called, of course we were not allowed to drink alcohol only being 17 years old, although it was a different story when we arrived in one of the ports!

When I first arrived on the ship I was shown my cabin which I was to share with three other boys of my age, Bert, who I was at Sea Training School with and amazed to see on the same ship and in the same cabin as me, Chris Barker and Ray ( I cannot remember his last name). The cabin was located below decks and towards the forward bows of the ship. The cabin next door also housed four catering boys.

My duties were as a Saloon Boy in the first class restaurant and Bell Boy delivering telegrams to passengers on board. The latter was always my favourite as I would always receive lots of tips each time a telegram was delivered. To achieve this I would place the telegram on a silver salver and next to it I would have a signed receipt with a coin on it, just to remind the passenger receiving the telegram that the previous person had left a tip! While waiting for the call from the Radio Room I would sit in with the ship’s telephone operator who was situated just down the corridor from the Purser’s Office occasionally the operator would let me have a go on the switchboard which was the old style plug-in-type.

When I worked in the First Class Restaurant my duties were split into three - breakfast, lunch and dinner and occasionally afternoon teas. My duties were to assist the waiters under the direction of the Head Waiter, Dusty Miller. Another one of my jobs was to polish the brass band on the deck that ran from port to starboard in the centre of the ship. This band (I’m not sure of the official name for it) was on each deck although I only polished the one, thank goodness!

Messing about in the cabin, there's me and Bert Tonks but I am unable to remember the names of the others.

Relaxing on deck on the right ( as you look at the photo) is me, Bert Tonks is in the middle but I don't remember the name of the person in glasses.

Me in my cabin 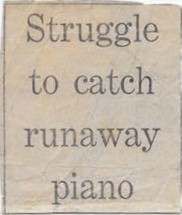 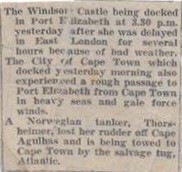 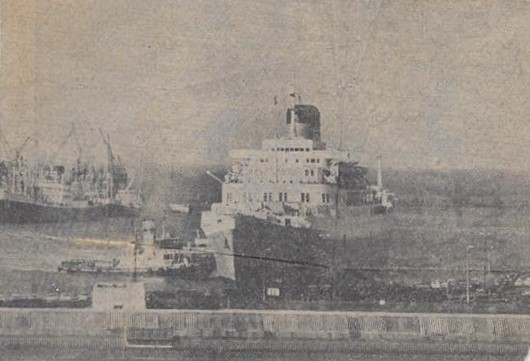 I can remember on one of the trips we were just entering Port Elizabeth Harbour when the ship suddenly rolled in heavy seas. I was in the First Class Restaurant; the waiters had just laid the tables.

As the ship rolled to one side all the cutlery, glasses and condiments, which were left in perfect positioning on the tables, came tumbling off. I was forced to hold onto one of the columns to stop me losing my balance; some of the waiters were not so lucky.

As the ship levelled off I walked into the kitchen just as the ship started to roll on the opposite side. I managed to hold onto a tap in the wall while I watched the newly cleaned plates, cups and saucers fall from the shelves smashing on the kitchen floor. The kitchen staff had not had time to secure them on the shelves.