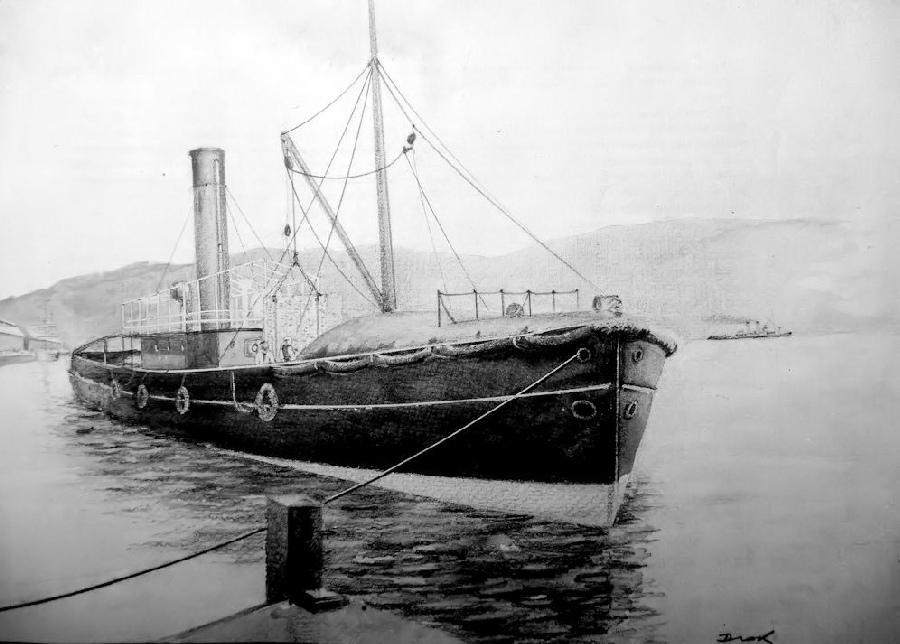 The vessel left the port, on 19th July, on a fishing trip and returned to the outer anchorage on the night of 20th July. She remained under steam all night cruising about off the harbour and while in the act of entering the harbour, on the morning of 21st July a few minutes after 7 o'clock a.m., was struck by three heavy seas, the last of which carried her on to the screen of concrete blocks on the inner side of the North Pier, about 50 ft. from the end of the Pier.

A receding wave took her off the Pier, when she drifted up the Channel and sank in deep water about 75 ft. from the inside of the Pier and 200 ft. from the end. She sunk about 15 minutes after striking on the Pier.

There were also the following fishermen aboard:

The "Lion" was broad built and of light draught, about 6 ft.

There is a conflict of evidence as to the speed the vessel was travelling at on reaching the entrance to the harbour. Fishermen Larsen and Wright saying she was not moving at a greater speed than about 5 knots, while the chief engineer, McFarren, says the vessel was going at her full speed, about 7 knots.

There is a further conflict of evidence as to the whereabouts of the two engineers at the moment the vessel struck the Pier. McFarren states that both he and the second engineer were in the engine room at their proper posts, and this is borne out by the evidence of Fireman Moorally, while the other fireman states that McFarren only was in the engine room and the second engineer, George Rees, was not.

Two of the fishermen, D. King and Johan Hansen, state that McFarren was on deck at the time of the collision with the Pier.

This is, however, contradicted by Robert G. J. Lees, Customs Officer, who was on the Pier head at the time, and Alfred Feltham, the latter saw McFarren escaping out of the skylight of the engine room a few minutes after the vessel struck.

Some of the crew and fishermen escaped by springing on the Pier immediately after the vessel struck, others were picked up by the boat of the steam trawler "Berea," which entered the harbour a few minutes after the "Lion."

The master, Hugh Legg, did not leave the "Lion" until she sunk under him. No orders were given after the vessel struck.

There were seven or eight life-buoys on the "Lion," and enough cork swimming belts for every one on board.

There was a boat on the deck which might easily have been launched, but no attempt was made to launch this boat, nor was any use made of the lifebuoys, or life-belts, with the exception of one lifebuoy used by the Indian fireman.

The second engineer and five fishermen were drowned but three bodies only have been recovered, the men drowned were

There was nothing in the appearance of the bar from outside to indicate danger, and the trawler "Berea," a much smaller craft, entered the harbour a few minutes after the "Lion," and did so with ease and safety on comparatively smooth water.

The Court is of opinion that the accident was due to the sudden appearance of the three heavy seas, which struck the "Lion" as she reached the entrance, and drove her across the mouth of the harbour and landed her on the Pier; the vessel being of very light draught would not answer to her helm which was put hard a starboard.

The wind was S.W., and the tide was two hours flood.

(1) The s.s. "Lion" was in good order and well found and equipped with life-saving apparatus.

(2) There was no liquor on board and no one on board was under the influence of liquor.

(3) There was nothing in the appearance of the bar as seen from the deck of the "Lion" to indicate that there was any danger, nor was the danger signal at the Bluff hoisted until after the entrance was made.

(4) The accident was due to the three heavy seas which struck the boat in quick succession after she had reached the entrance and which drove her on to the North Pier, and the lightness of the vessel's draught and the heavy seas prevented her from answering her helm.

(5) After the vessel struck the Pier no orders were given and each person on board acted as he thought best to secure his individual safety.

(6) Chief Engineer McFarren was at his post in the engine room when the vessel struck, and he then escaped by the skylight and sprang with others on to the Pier.

(7) The master, H. Legg, remained on the boat until she sank, when he climbed up the mast and from there took to the water, where he was picked up by the boat of the "Berea."

The Court is of opinion that great praise is due to Johan Sjolander, the master of the "Berea," who when he saw the mishap lowered a boat and rescued three men.