Captain Bratt was the London Dock Superintendent, cadets were required before going home on leave to report to the Albert Dock office.

This gloomy (and very grubby) building appeared to have passed its characteristics on to those who worked in and from it. Captain Bratt was as unprepossessing person as one could get, or so he seemed to a young and brash cadet (me!).

Now for a curious story, one I have so far been unable to verify.  It was told to me by my father, not always an undisputable source as he, like most sailors (and fisherman) could tell a good yarn.

Arriving home on leave I asked my father why the Company employed such deadbeats as Captain Bratt, he told me the following.

You would not call him a deadbeat if you knew his story.   He was Chief Officer of one of our ships on the Russian convoys, like many others his ship got iced in at Mermansk and with other British crews found himself housed in gloomy barrack like quarters ashore.   This was not to Harcourt's liking so one day he simply walked out of the camp - and kept on walking.   Somehow so my father told me Harcourt managed over the next year or so to cross Russia, bum rides on various ships until finally arriving back at Bleak House, No.3 Fenchurch Street.

"'Who are you?" demanded the doorman of this very tramp like person.

Like all the Company's doormen in the 'good old days' the doorman was familiar with all the officers, "No you ain't, 'e's dead now 'op it."

Even if the story is only partially true it confirms my saying that there were some remarkable people in the Company who's story should be recorded. 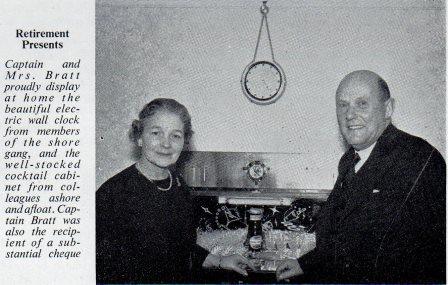 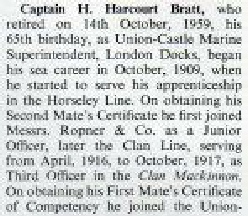 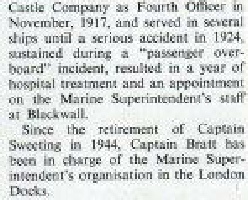