My name is Cliff Bragg and I appear on your Staff register as Clifford but I don't use my full name anymore. I am now 76 years old and would like to get in touch  with old shipmates. ( brace@netactive.co.za )

I joined U-C as a cadet in 1949, obtained my Masters Cert. in 1959. I eventually left U-C and emigrated to South Africa in 1963. my final post at sea was as 1st Officer of R.M.S. Windsor Castle. I was Chief officer of the Rochester Castle for close on two years.  I was the first Uncertificated 4th Officer in the company when I was made Junior 4th of the Winchester Castle in 1951 under the Command of Capt G.W.B. Lloyd. and stayed on that vessel until I went for my 2nd Mates certificate in 1952.

Cliff Bragg (46-49) who died in Johannesburg, South Africa on May 13th, 2017 aged 85, was for many years the OP Society Rep in Port Elizabeth. He is survived by his wife Beryl, his son Philip and his two daughters Caroline Bragg and Nicola Contival. At Cliff’s request a wake was held at the Sundowner Pub & Grill in the suburb of Randburg – “a very convivial occasion of which Cliff would definitely have approved” in the words of Shaun Maynard (60-64), the OP Rep in Johannesburg, who attended the memorial service held on May 19th at Doves Chapel, Randburg.

Shaun writes: “Cliff was at the NCP until 1949 when he joined Union Castle. He stayed with the line for all his seagoing career, gaining command around 1963-65. After coming ashore, he became Union Castle’s marine superintendent in Durban. Throughout his mercantile career he enjoyed a professional reputation second to none.

When Lionel Stephens visited South Africa in the 1990s, he, myself, CB and his brother-in-law Ian Simpson (45-49) held a special OP dinner at the Port Elizabeth airport hotel one Sunday evening. A very happy occasion ensued. CB’s friendship with Ian had begun at the Nautical College and was to last a lifetime. They took all their Board of Trade certificate exams together despite working for different companies, married sisters and lived close to each other in Port Elizabeth. Though obviously saddened by Cliff’s death, Ian was in good form at the wake. He joined Shell Tankers after the NCP, rising to Chief Officer. Later he worked for South African Railways and Harbours as a pilot and served in SW Africa (Namibia), Cape Town and Port Elizabeth – a career he says that he thoroughly enjoyed.

I first met Cliff in August, 1974 shortly after arriving in South Africa after my overland drive from London while I was searching for a job. It was a remarkable occasion. I had booked a one-way steering class passage on Union Castle’s Edinburgh Castle from Durban to Cape Town in the hope of finding employment there. The first person I met on board was CB followed soon after by another OP Ken Anderson (19-20). What fun we had on that three-day trip! Captain Reggie Kelso (Old Conway) giving me free run on the vessel, which allowed me access to the bridge 24 hours a day. Noon day cocktails on the bridge allowed one to meet an interesting array of people, including Ian Smith, then PM of Rhodesia who was taking a break from the ardours of office.

Cliff was very much a people person, loved a party and was widely read with a deep general knowledge. In retirement, he gained a name for himself by writing many and varied letters and articles for the local newspaper in Port Elizabeth under the pseudonym of ‘The Cap.’”

On Saturday July 29 Cliff’s son Philip scattered his father’s ashes in the ocean off Port Elizabeth – an event that was covered in the Port Elizabeth Herald newspaper. 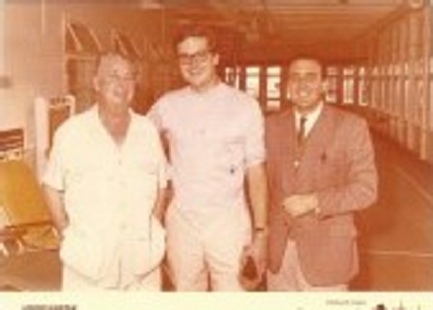