John Edwin Cutler was born in Southampton on the 9th of January 1873, son, and one of the eight children, (three sons and five daughters) born to Yorkshireman George Cutler and his wife Emily (nee Baker) who was born in Romsey. George, born in 1840, was an engine fitter and the family are shown as living at 28 Coleman Street in 1876.

It appears that John joined the Merchant Navy in 1892 as an Electric Engineer, his first ship being SS Mexican, a 378 feet long passenger ship of 4666 grt, which was built by James Laing & Co. (Yard No.433), Sunderland, for the Union Steamship Company. She was launched on the 1st of August 1882, and was the largest passenger vessel ever built on the north-east coast.

In 1892, when John joined SS Mexican, Union Castle entered into a joint cargo service (Union-America Line) from South Africa to the USA. John stayed with Mexican until 1894, and during his time with her he first became a Refrigeration & Electrical Engineer in 1893, and then 6th Engineer. National Archive records for 1892 to 1894 show Mexican operating the Southampton to Durban (South Africa) route, calling at Madeira, Capetown and Port Elizabeth.

There is a gap in the records until John’s next recorded ship, the Union-Castle ship SS Gaul, a 400 feet long passenger ship of 4745 grt, which was built by Harland & Wolff (Yard No.261), Belfast. She was launched on the 16th of February 1893, and delivered to the Union Steamship Co. on the 6th of May the same year 1893. She also operated Union’s Intermediate Route Southampton-Capetown-Port Elizabeth, which took 21 days. John joined Gaul as 4th Engineer on the 12th of November 1897, and did two trips before sailing with SS Moor, another Union ship, for two months between August and October 1898.

Records relating to John now become a little sketchy. The 1901 census doesn’t show anything for him, and it is most probable that he is still at sea. The rest of the family, are living at 132 St. Mary’s Road.

In 1903, at the age of thirty, John married Margaret Kennedy, aged 25. It appears that on November the 4th of the same year, tragically, she died whilst giving birth to a daughter Margaret Kennedy Cutler. Margaret survived and in the 1911 census she is living with John’s mother Emily at 165 St. Mary’s Road. Emily is shown as a Widow, George having died the previous year 1n 1910. The street directories show that Emily continues to live at number 165 until at least 1916.

John married again in the first quarter of 1914 to Emily Louisa Harvey. A John Cutler does appear in the 1916 and 1920 Street Directories at 255 Shirley Road, and I think this may be “our John”, as it ties in with another record we will come on to next.

What John was doing at sea from 1899 remains a mystery for the moment, but he must have up to something interesting during the First World War as I have managed to get hold of his Medal Card. This shows that he was awarded the British War Medal and the Mercantile Marine Record, and it is this award which is interesting.

During the First World War, Merchant Navy seamen, who had served at sea for at least six months, and who had served on at least one voyage through a danger zone, were entitled to the Mercantile Marine Medal. The Medal was awarded by the Board of Trade, a committee of the Privy Council of the United Kingdom. Recipients of the Mercantile Marine Medal were automatically entitled to the British War Medal and those who were invalided out of the navy during the war were entitled to receive the Silver War Badge. 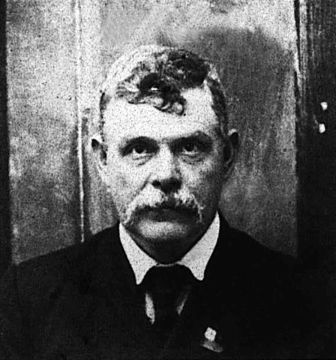 During the First World War, Merchant Navy seamen, who had served at sea for at least six months, and who had served on at least one voyage through a danger zone, were entitled to the Mercantile Marine Medal. The Medal was awarded by the Board of Trade, a committee of the Privy Council of the United Kingdom. Recipients of the Mercantile Marine Medal were automatically entitled to the British War Medal and those who were invalided out of the navy during the war were entitled to receive the Silver War Badge.

The area around the British Isles qualified as a war or danger zone, and it meant that many sailors quailed to receive it. However, a total of only 133,000 were issued against a total of 6,500,000 for the British War Medal which was received by all active participants in the conflict.

In 1914, 43% of the world’s merchant ships, amounting to some 20 million tons gross, were owned and operated by Britain and the Dominions. The ships brought in food and raw materials, as well as exporting industry’s output to the world. The Imperial German Navy saw cutting the trade routes as the means to victory, expressed by Admiral Reinhard Scheer, Commander-in-Chief of the High Seas Fleet, as ‘Our aim was to break the power of mighty England vested in her sea trade’. For this, the submarine became Germany’s principal weapon and it was not countered until the full introduction of the convoy system in May 1917. This involved grouping merchant ships under the protection of naval escorts for passage across the North and South Atlantic in particular. Nonethelessand at the cost of 178 boats and their 5,000 crew members, German U-boats had sunk 6,924 Allied ships, almost 13 million tons gross, with the loss of more than 14,000 merchant seafarers by the end of the war in 1918

Most WW1 service records for Merchant Seamen have not survived and this is rather frustrating …!! There may, however, be some further records held by the National Archives, alas not on-line.

It is noticeable on John’s Medal Card that both medals are annotated RTD (1/12/21 and 7/12/21). This normally means that the recipient could not be found, usually because their address had changed from that on the records. The record shows that the medals were issued to what looks like 137 Shirley Road? Unless it is number 255 and poor handwriting was misread in sending out the medals.

John died in June 1922, aged 49, cause of death unknown. It is not clear whether he was still at sea or not. A lack of records now forces us to speculate. In 1924 there is a record of an Emily L. Cutler marrying William R. Webber at Southampton, and a further record of her death at Southampton in 1941. This is likely to be Emily as there does not appear to be a record of death for Emily Cutler that fits with all the other information, and, the 1925 street directory shows a Mrs Webber at 255 Shirley Road. The 1939, and the 1940/41 directories actually show Mrs Emily Webber, which, I think, is pretty conclusive that this is her. The 1946 directory not only does not show Emily, but there is no 255 Shirley Road! Emily L. Webber is recorded as having died in 1941, aged 72. Did she die naturally?, or was she a casualty of the blitz, and her house bombed out? Shirley Road did receive some attention from the Luftwaffe.

Records suggest that William died in 1950.

I am grateful to Clive Sweetingham at Southampton Memories: People and Places Facebook Page for this information