GEORGE Taylor spent 37 years with the Scottish Prison Service, serving in HM Prison Edinburgh, Perth, Inverness (Porterfield) and Glasgow’s Barlinnie before being appointed governor of Dumfries Prison and Young Offenders’ Institution (YOI) in 1989. He spent ten years there before retiring in 1999.

A merchant seaman with the Clan Line as a young man, he saw the world and had expected to spend his life at sea but his wanderlust faded the more he thought of his childhood flame, June, back in Edinburgh.

He returned to dry land, joined the Scottish Prison Service in 1962, married June two years later and progressed up through prison officer ranks, serving in most Scottish prisons, until the senior Dumfries job.

George Taylor was born in Edinburgh on 15 August, 1939, just over two weeks before the outbreak of war, to Peter and Jean Taylor. He attended Roseburn Primary School during the post-war years and then Tynecastle High.

It was at Roseburn that he first laid eyes on a young lassie called June Campbell.

“There were separate playgrounds for boys and girls,” he recalled. “When our ball got kicked into the girls’ playground, I got lifted up to get the ball thrown back over the wall. When June threw the ball back, I said to myself: “That’s the girl I’m going to marry.”

He did so on his 25th birthday in 1964, choosing the date “so that I never forget our wedding anniversary”.

George and his younger brother Stewart looked forward to the annual family holiday in their grandfather’s home in Kinghorn, Fife, where he developed a lifelong love of the sea.

He joined the Lifeboys (because the uniform looked like a sailor’s, he said) and then the Sea Cadets.

After Tynecastle High, he trained as a shipwright at the Royal Dockyard, Rosyth, before joining the Merchant Navy as a ship’s carpenter, initially on Houlder Brothers’ ships.

He later joined the famous Clan Line, which took him to Asia, the Middle East, Africa and South America. He had fond memories of celebrating his 21st birthday in Cape Town in 1960.

After opting to become a landlubber to be with June in 1961, Taylor settled in Edinburgh and first got a job as a mechanical inspector with Ferranti.

But the prison service attracted him and he signed up in 1962 at HM Prison Perth. In 1965, he was posted to Dumfries for the opening of the Young Offenders Institution.

In 1970, he was promoted to the high-profile job of senior prison officer at Barlinnie, Scotland’s biggest prison, in the Riddrie area of Glasgow and widely nicknamed the Bar-L.

The following year he was transferred to Edinburgh to study criminology, graduating from the Moray House College of Education in 1973 in the field of Social Work and Community Development.

From 1975–77, Taylor served first as principal officer in the Scottish Prison Service, later as an instructor at the Prison Service College in Falkirk. In 1977, he was promoted to the post of assistant governor at HMYOI Polmont in Falkirk, where he spent four years.

It was in 1981 that he was sent back to Dumfries as deputy governor, where he remained until being moved to HM Prison Perth with the same title in 1988.

His final appointment was back to Dumfries in 1989, this time with the top job of governor, where he would remain for ten years until he retired on his 60th birthday in 1999.

In the 2000 Queen’s Honours List, he was made an OBE for his 37 years of “dedicated service to the Scottish Prison Service”, an award which brought him immense pride.

He was also proud of being invited several times to the Royal Garden Party at the Palace of Holyrood House.

Retired in Dumfries, Taylor soon turned his earlier allegiance from Heart of Midlothian to Dumfries’s own Queen of the South. He became highly active in the local community, deeply involved in the Riding for the Disabled charity, which uses horses as therapy for people with physical or learning disabilities.

He was a member of Dumfries Rotary, a member of the local committee of the Prince’s Trust for many years, chairman of Friends of the (Dumfries) Archives, vice-chair of the Retired Civil Service Fellowship and a past president of Dumfries Burns Club.

He also belonged to the Albert Club and the Marchmount Bowling Club on Moffat Road, Dumfries.

According to his only daughter Susan, the love of his life along with her mother, he also took immense pride in using his engineering skills on behalf of Remap, the national charity which looks to skilled volunteers such as Taylor to help disabled people by building or modifying equipment to suit their needs.

“He also thoroughly enjoyed night classes in Italian cookery,” Susan added, “possibly enhanced by being able to enjoy the part of the bottle of red wine not used in the cooking! He also enjoyed the odd whisky, or two.

“His great passion, of course, was the sea and shipping, for which he maintained a lifelong interest. He was always happy when researching shipping history, especially when there was a local connection, and he often gave talks on the subject.”

George Taylor is survived by his wife of 47 years, June, their daughter Susan, son-in-law Bruce and three-year-old grandson John. 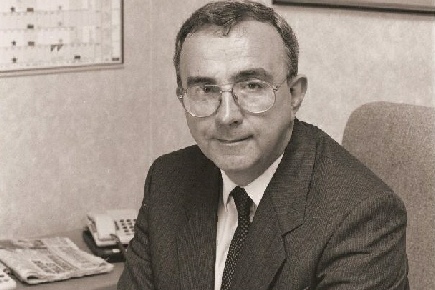