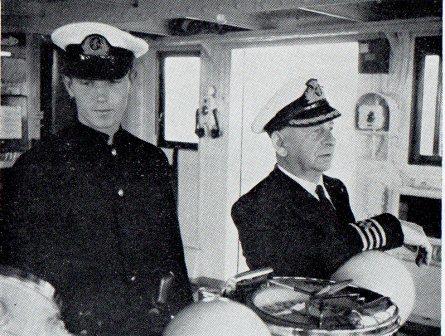 I'm wondering if there are any numbers of the  Company Magazine produced in latter years still around?

As one trip there was a photo of me at the wheel of Capetown Castle, with Captain Trayner beside me. Earlier Sir Nicholas Cayzer, his daughter Nicola and her fiance had been in the wheelhouse with Joseph Lucas. (Lucas Batteries) tagging on.

I recall the time very well.  Sir Nicholas had been on board since Cape Town.  His daughter Nicola and her fiance had joined the ship at Las Palmas most probably though occasionally, we called at Madeira.

We'd gone in close to Plymouth Sound that afternoon. Sir Leslie Joseph, was with the family ,on the Bridge. I think, He had some R.N.R. connection and was familiar with the area. It was a beautiful afternoon and a nice diversion from the norm.

Great! to find Your Site and what a surprise to find the photograph, I am chuffed!