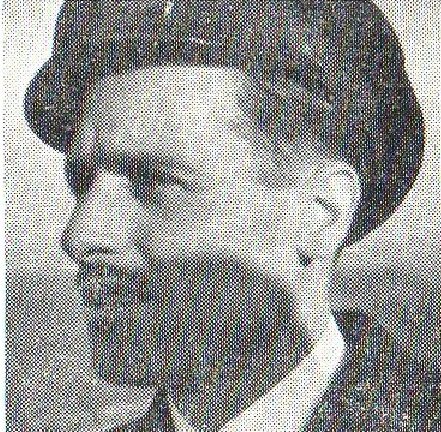 Obituary from the Website of  Institute of Chartered Shipbrokers

Ken was born in Cardiff on Easter Sunday 27th March 1921, and many would say with the ‘sea running through his veins’. From an early age Ken had a yearning to sail the seas, and realised his ambition shortly before the start of the second world war in 1939, then aged only 17. Ken had joined the Saint Line, but little was he to know that within months he would be running the gauntlet of the German U boats in merchant Navy convoys. It was in 1941, on one such expedition, that the Mv Crusader on which he was serving as the third mate, was sunk in the Atlantic and Ken was taken a prisoner of war. He spent four years in a German camp, an experience which he chose to close from his mind and despite being urged would never discuss. However, as a result of spending many hours in the dark, dingy surroundings of a camp cell, Ken had developed impaired eyesight and this plagued him for the rest of his life.

However, nothing would deter Ken. He was determined not to be held back, and he resumed his sailing career after the war by re-joining the Saint Line, and in a short time achieved the rank of Captain aboard their vessel , the St Essylt. It  was on one of her voyages in early 1950 that he met a young lady passenger, Peggy, who was travelling with her parents to Argentina. Ken realised relatively quickly that Peggy was the lady for him and he asked her parents for her hand in marriage. Within 6 months of that first meeting they were married, in Buenos Aries, and settled into the house in the Heath that they lived in for their entire married life, and at which Ken remained until his death.

1951 saw the birth of their first child, Graham, and in 1953 their family was complete with the birth of Susan.  Ken continued his sea career for a few years more, but having lost his mother at the tender young age of only 6, he was destined to one day come into family business of Shipping and when coming ashore he joined his father’s business of J.F Thomas ltd.  He consequently put his sea going experience and his Captain’s ticket to good use by furthering his education to become a Master mariner, studying whilst he was working for his father and step-mother as a ships agent.

However, following the death of his father he felt it was time to branch out on his own and parted company with his step-mother, to form  K H Thomas (Shipping) Ltd in 1963. His new company was showing great potential and so it was that in 1967 the Lambert Brothers group approached Ken with the proposition of a merger with their Cardiff office by the acquisition of his company. He agreed, but only  under the proviso that his name be carried on and that he be allowed to trade as a wholly owned subsidiary. He confided to friends that with his two children approaching O level stage at their Grammar school and he being keen to give them the best of education, he felt that the merger offered him both the security and the finances that could see them through University. This decision alone, which he made for the benefit of his children, epitomises Ken’s unselfish character and shows what a great family man he has been.

The Lambert Brothers/K H Thomas merger marked the lift off for both companies, and staff numbers rapidly grew from 10 in 1969 to there being 24 employed in 1975. K H Thomas, within Lambert Brothers, became one of the leading short-sea  brokerage companies in Europe and by 1978 they were handling 200 ships per month in chartered fixtures worldwide, and ships agency all over the Bristol Channel. Lamberts in their own rights had taken off after securing as a group the liner agencies of Cosco, Irisl, Misc, Balkan and Black Sea and Unithai, amongst others. Lamberts under the guidance of Mr John Iles, and K H Thomas under Ken, went from strength to strength, with both companies operating in the same office and staff being encouraged to work for both organizations and thus gain an all round knowledge of shipping activities. Ken was an inspirational leader and a great teacher to all those who had been fortunate to work under him. Many of the staff that exist within offices in this area today started or progressed their careers with him and plenty owe a lot to Ken for his patience and understanding.

In March 1981 on his 60th birthday, Ken took early retirement from his office, leaving behind him a very successful business which continues in one form or another to this day. However , Ken did not fully retire and continued to do cargo supervision for the Noranda Timber company ( previously Northwood Mills of Canada) on their monthly service into Newport docks, which was  still under  the K H Thomas agency. He also undertook marine surveys (draft and cargo inspections) with the company that he had formed a few years earlier with his brother and his nephew David (Thomas, Thomas and Thomas Ltd), and he still found some time to play his beloved Golf.

A member of the Caerphilly Golf club, Ken continued playing golf into his mid 80’s. No mean feat as anybody who knows this course will confirm. Built on the side of the infamous Caerphilly mountain the  course is notorious for its slopes and would challenge any youngster, let alone a man in his 80’s.  Admittedly, he was heard to say that it was getting tougher at his age so he now just does 9 holes instead of the 18!!

The love of his life Peggy was there throughout to support him but sadly passed away in July 1990, aged 68.

Ken will be remembered for his friendship, loyalty and generosity. He was a great family man, a hard-working provider to his children, and later to his grandchildren. He  had a zest for life that never deserted him despite  his many set-backs over the years. A man of shipping, with a tough but fair exterior and a heart of gold. Ken’s strength of character was even more evident in the last few years, whilst throughout prolonged illnesses and lengthy stays in hospital and care homes he kept  his sense of humour. Always a glint in the eye, a playful but harmless comment to the ladies, and a helping hand for anybody in need.

I feel privileged to have known Ken, to have had him as a friend, to have worked under him, and eventually to have succeeded him as a Director of his company. For me, and I am sure for many of us who were fortunate enough to know him, his memory will endure as long as there are ships and ports in this world.

Obituary written by our Secretary Theo Coliandris, agreed by the family together with photograph.