From his daughter Mrs. Judith West.

Thomas's eldest son Isambard (Ice) Arthur Phillip was born on 13th February 1915.   He joined Union-Castle in 1932. He wanted to join as a deck officer Apprentice but times for employment were difficult and so he joined the Catering Department.

In 1939 he was Store Keeper on the "Carnarvon Castle", it arrived in Table Bay in the 2nd week in September and was taken over by the Royal Navy.   He became a PO Supply.   In December 1940 he was in the South Atlantic when they had a battle with the German raider "Thor".   The ship was very badly damaged.   After about 90 minutes the "Thor" laid down smoke and made good their escape.   After the battle they were trying to clear up and an unexploded German shell was found in the magazine.   The vessel made for Montevideo and was granted 48 hours for repairs.   He (Isambard) said they all had great satisfaction when plates from the scuttled "Graf Spee" were used to patch the shell holes in the hull of the "Carnarvon".   When the ship arrived in Table bay she was saluted by a special guard of honour as she passed through the harbour entrance.

September 1942 and they were back at their old haunts in Loch Fyne.   This time training again as it turned out for the landings in North Africa, Sicily, Salerno, Anzio and South of France.

At the end of the war he returned to the Merchant Navy and it was not long before he got his first real promotion.   He went as Chief of Cargo Boats leading in time to the South African Service and liners sailing from Southampton.   He served on many of the Company's vessels including the "Capetown", "Pendennis" and "Transvaal Castle". Before he retired early he was serving on the Windsor Castle" as Chief catering Officer/Purser. 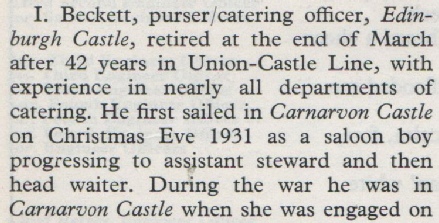 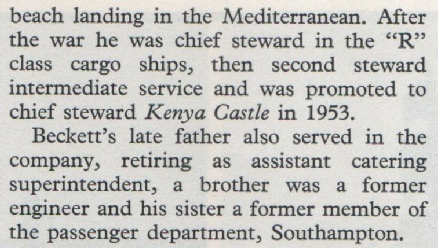