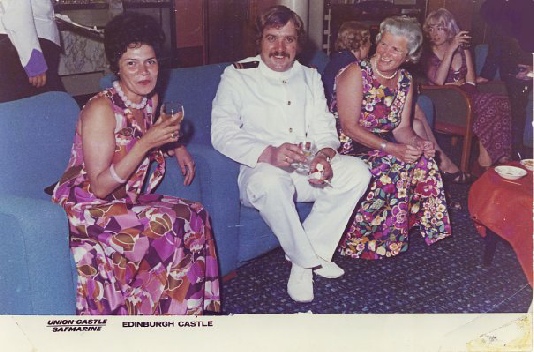 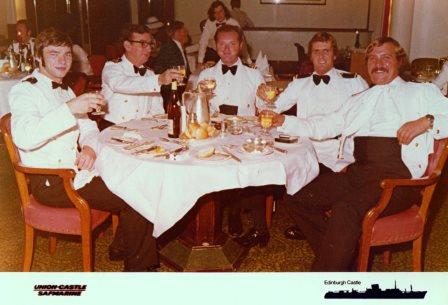 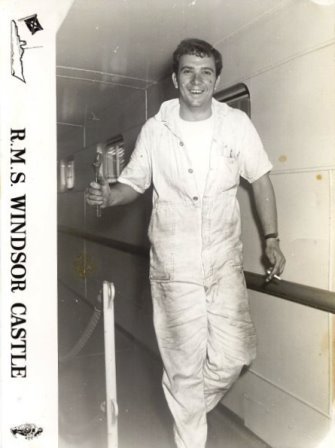 I sailed with Tony Hickman from July to September 1971 on SS Clan MacTaggart from London as far as Mombasa . The ship was taken off the run in Mombasa and  sent to Bilbao for scrap.

Tony was third engineer and had been there the previous voyage. The Chief Engineer was  “ Stainless “ Stan Steel. Stan made it obvious  he hated cadets, ex cadets, Catholics, Englishmen, Mail Boat men and  non-football players . As the only cadet there life was not pleasant but Tony as an ex cadet spent his time setting the balance.

Tony was delivered to the ship in the West India Docks by car, his mum and dad drove him down, stayed for lunch and drove home to a thriving newsagents in Wolverhampton .

When Stan was off on a rant about how useless cadets were in the bar one Sunday in port Tony explained to him that the quality of the cadet was a direct reflection of the training received  from the Chief Engineers, Stan took it as a compliment .

The trip was awful solely because of Stan but Tony’s constant baiting provided some relief . Tony slipped ashore early one Sunday morning in Durban, Stan caught him coming back on board  around eight , “Where have you been Hickman?”, he asked, ” Morning Mass Chief “ was the answer.

It was only the larger than life  character of Tony that  kept me sane that trip, whatever Stan did, Tony paid him back twice over. Tony had a great sense of humour that landed well above Stan’s head and  just constantly fought off the bickering on both our behalves

I was on the  8 – 12  with Tony  rebuilding the Ruston generator, Tony was a good engineer as well as a great guy to work with despite being an ex-Cadet and condemned by Stan  .

I left in Mombasa  as the ship was off to the scrap yard and joined King Arthur with another Clan Line legendary Chief Engineer, Archie McLean.

When I saw Tony at Southampton in 2013  he was  unrecognisable, a shadow of his former self, until he spoke with the same booming voice and the Midland’s accent that I remembered from forty years before .

To say Big Hickey was larger than life is an understatement..........I got to know him well as a good friend as well as a shipmate.

I first meet Hickey on the Eddy in '75, a 6ft odd giant with a groucho mustache (a gentle giant) he was platform man on the 8/12, I was platform man on the 4/8, so as on all mailboats , you only drank and tried to chat up the passengers with your own watch. He was a fanatical Wolves supporter and I was a Manchester City supporter, so we came to know each other well on the subject of football.

One evening I was having a party in my cabin for the 4/8 with (cough) female passengers, when about 12.30 in the morning, a knock came on my door, and Hickey in his No 10s asked quite politely could he bring his friend in to the party, of course "bring her in", and in comes Hickey with a ruddy great dane that he had got off the boat deck, it caused mayhem .

Then in November of that year City were playing Wolves at Molineux, so I rang Hickey up to say that me and my dad were going to the match. "Meet me at the wolves supporters club and we will have a couple before the match", so that day we arrived outside the club, only to be told that away supporters were not allowed in. "But I’m meeting Big Hickey here""why didn't you say so , come in" and so after about 10 mins in strode Hickey,I think everybody in the room knew him, with "hello are you home again", "to our mascot has arrived". Not much of a mascot because we hammered them 4-0 and wolves got relegated that season.

After being made redundant I lost touch with all of my shipmates and often thought about him, then in 2011 at the Liverpool reunion I saw on the list of attendees Hickeys name,  I looked all over , then thought he mustn't be here, when a clap on the shoulder and a midland accent cried Davy, it took me a few seconds to realise it was Hickey, what a difference, he was a fraction of the great man that I had come to admire, he was definitely a poorly man.

I went to visit him in hospital in stoke, where they told me how bad he was, but was still smiling.

The next time- I went to his funeral, sorry to say only a couple of his shipmates could manage it, a sorry end to a geat mate ans shipmate, I will always remember Big Hickey with his booming brummie voice , sporting a groucho mustache as seen in his messkit, god speed Hickey RIP