I am a grand daughter of George Harold Griggs, who served as 4th Officer on HMS Gascon during WWI. I have a beautiful sketch book of drawings my grandfather did during his time in and around Gallipoli in 1915.

I live in Australia and intend to publish the drawings as a book to coincide with the 100th anniversary of ANZAC day. I have other relevant photos of the Gascon and my grandfather that you may be interested in. I would love to give you a copy of the book, once published, if you're interested.

Perhaps also, you may have some information I could include. Grandfather had drawn many other ships in the area at the time and I'd like to include a bit of information about each.

I have a strange connection to the Gascon myself. I served for a short time in the Australian Army as a Staff Cadet at RMC Duntroon. There I learned that Major General Bridges, RMC's first Commandant, died aboard the Gascon as a result of sniper fire during the war.

I believe my grandfather was on the ship at the time. I would love to communicate further with you if you're interested. I am unfamiliar with your website's operation as yet, however stumbled on an article about the Gascon that included a copy of one of the pictures from the sketchbook, along with an article my grandfather wrote on the 50th anniversary of the landings.

Best wishes and thank you for taking the time to read my message.

I plan to publish a book of sketches my grandfather Capt. George Harold Griggs made whilst on the Hospital Ship the Gascon in WW1.

I understand that ANZAC Cove was named formally on 29/4/15. My grandfather has written in his sketch book that 'all sketches were done on the spot, at the time', yet he has labelled ANZAC Cove as such on 25/4/15.

It may be that he inserted the notations regarding ship and location names at a later date, however I am keen to know whether anyone is aware of when people may have commenced referring to it (albeit colloquially) as ANZAC.

If it is the case that is was known by that name earlier than 29/4/15, I'll feel more confident that all aspects of the book were completed 'on the spot', rather than the sketches only.

I would be most grateful for any light members may be able to shed on this to assist me. 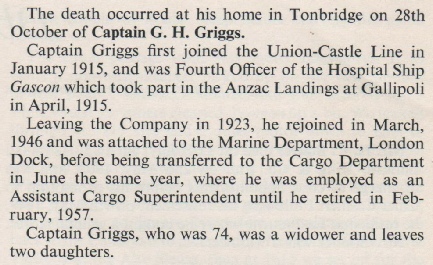