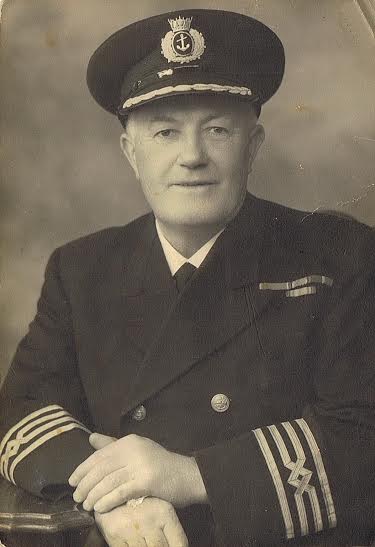 Hubert Robinson (in newspapers referred to as Herbert) was Chief Officer on board the passenger vessel Dunbar Castle when she was sailing from England to Beira, Mozambique and hit a mine seven miles from Ramsgate on Jan. 9, 1940.

There were 150 crewmen and 48 passengers including 9 children and the pilot on board when she left.

The crew managed to get all the passengers except one into life boats. Most of the crew also made it into the boats, but several had been killed by the explosion including the master. Others in the galley were scalded and died of their injuries.

One passenger and several crewmen were missing after a head count was made, none were found alive.

The pilot had been injured and a race horse that had been on deck was knocked into the sea.

Thirty minutes after striking the mine the Dunbar Castle settled on the bottom on an even keel. In all ten lives were lost.

The wreck was demolished following the war.

Dunbar Castle was sailing in a slow convoy. She carried 50 passengers, among whom were women and children. In the early afternoon a mine exploded on her starboard hand, below the bridge structure. She broke in two at the point of impact, and in smoke and fumes crumpled up from the after end of the forewell deck. She at once heeled over to starboard and her list rapidly increased.

Most of the damage was near the Officers' cabins and the bridge, on which the Master was mortally injured and the Second and Fourth Officers also hurt. All light was cut off below, fierce fires started in the galley and some men were badly burned.

The Chief Officer was on the promenade deck. He went down to the boat deck, which he found deserted, and lowered three boats. The crew were slow to action stations as the two ladders from the forecastle had collapsed. He went to his cabin to find a torch and a knife with which to cut away a boat ladder. All the boats were manned without panic, but the Doctor and one man were thrown into the water. They hung on to the gunwale of another of the boats lowered by the Chief Officer and were pulled aboard. The Chief Officer and a volunteer, Able Seaman E. Akehurst, then went below to make sure that no one was lying injured there; they called out in the dark, but there was no answer.

When they came out the boat-deck was awash and they had to leave the ship. There were men in the water, one of whom the Chief Officer picked up; two others were saved by another boat.

Three stewardesses looked after the wounded with the utmost care. All night long the Tourist Stewardess tended the injured Quartermaster.

Details:  H H Robinson was Chief Officer on the Union Castle Ship 'Dunbar Castle' which was sunk by a mine on the 9th January 1940. The Commanding Officer (Captain Causton)was killed during the incident and the Chief Officer took charge of the abandoning of the sinking ship by life boat. They were picked up by a minesweeper HMS Calvi and transported to Ramsgate.