My dad, Graham Jarvis, sailed with the Union Castle Line from 1950 – 1955. He was an engineer and served on the Pretoria, LLanstephan (including the final journey), Drakensberg, Edinburgh, Arundel and Rhodesia Castles.

We met for coffee this morning and I showed him some of the photos from the recent group posts and he was deeply moved. Two hours and quite a few stories later, we parted with my urging him to write down his memories of that time.

I heard stories involving George Tuck, Percy Partington and Velocity Jones (great name!) as well as a near disaster involving sea water getting into something it shouldn’t – sorry, I can’t remember what it was - he got very technical at this point but he talked of boilers, generators, coils, psi, funnels and so on . . . Here’s a photo of my dad. 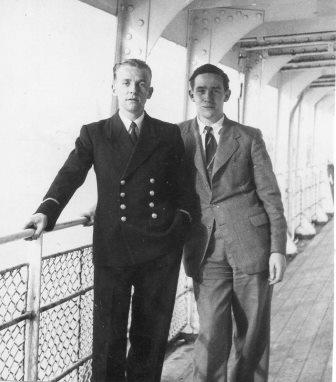 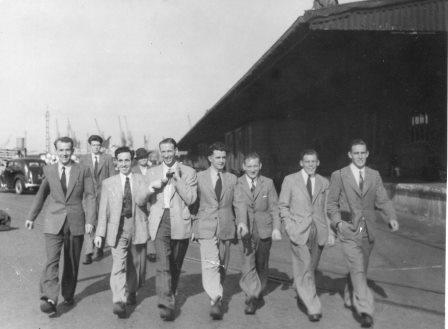 Going ashore in Durban from Drakensburg Castle in 1952. 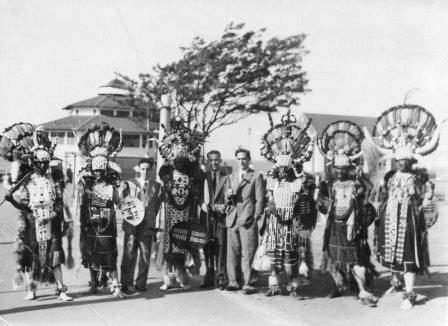 With Rickshaws in Durban in 1952 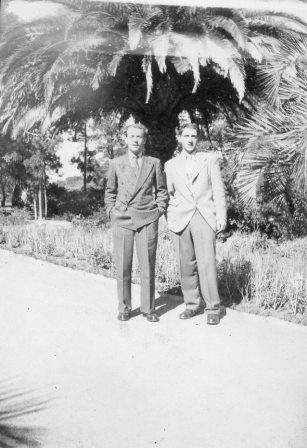 Graham and Jimmy ashore in Port Elizabeth in 1952

(Can anyone identify “Jimmy”) 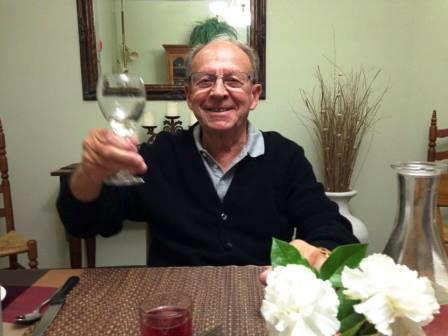 Some memories of the S.S. Llanstephan Castle – Graham W. Jarvis

The Llanstephan Castle, affectionately known as “The Stephan” was built in 1914 at Glasgow.

To call the “Stephan” a hard work ship would be a masterpiece of understatement – 2 quad. exp. engines, 5 scotch boilers with 3 weir feed water pumps.

At my own request, I had transferred from the Pretoria to the Stephan and Head Office had willingly obliged.

I reported to the Sen. 2nd at Albert Docks in London. Upon hearing I had come from the mail ship, he had one question for me: “What did you do wrong?” he asked. Soon thereafter, I fully understood the question.

My request to transfer was one of my better decisions throughout my engineering career. 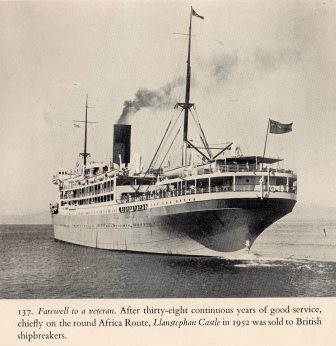 As I prepare these notes, my Union Castle Chronicle is open to page 372 and photo #137 headed “Farewell to a Veteran” shows the Stephan en route from London to South Wales. A fond memory indeed!

Continuing my experience with the Stephan, Mr. V. Jones was conspicuous by his absence as the Chief Engineer and was seldom to be seen from start to finish of my less than one year experience as 3rd Engineer with the Senior 2nd. The 4th and 5th Engineers paired off with the Intermediate and Junior Seconds. The electrician completed the group. Two Firemen per watch tended the five scotch boilers with one greaser per watch. The donkey man and the storekeeper completed the engine room crew.

The Stephan was a challenge from day one.

However, when we arrived at Las Palmas the last pump failed resulting in a 2 day stopover for repairs.

The suction side of the pumps could get the water from storage tanks but could not discharge the feed water to the boilers. The pump casings had failed due to age and the water was discharged to the bilges.

The lowest ebb arrived as we approached Capetown and seawater was required to supplement the boiler feed water.

When the “old girl” finally returned home to the UK she did not tie up to the quayside but leaned against the quay and heaved a sigh of relief. We had made it home on the expected final voyage. Surprise, surprise, we were informed that one final voyage would be made!

In preparation for this final voyage, some repairs were made and we were outward bound once again with passengers, however, the voyage ended at Capetown.

A return home was in order and soon we left with a skeleton crew. In lieu of regular passengers, we had some people from a leper colony requiring return to England.

A return speed of seven knots was the posted speed and we arrived safely at Southampton. We had left Capetown five days ahead of the Carnarvon but the mail ship arrived one week ahead.

We had arrived safely and very soon we returned to London.

Within a couple of days we took the Stephan to the breaker’s yard at Newport and within the hour we were on the train for London with a fond farewell wave to the S.S. Llanstephan Castle.