Looking for some detail on Peter Campbell as part of my family history research.

Have only been able to find limited details on a CR10 which looks as though he joined the Carisbrook Castle (#108351) in November 1918.

There is a story within the family that because of illness he was taken off a ship in the early 1920's somewhere in France and had an operation on his stomach and that ended his seagoing career.

Any help on more details would be appreciated.

I attach a photograph that I believe is Peter Campbell and I have been trying to identify the cap badge and wonder if you can help.   The photograph was taken by a photographer in Union Street, Plymouth but I don’t know the date however it must be between 1911 (when the census has him in Glasgow as a boilermaker) and 1918 since he looks much younger than the photograph on the CR10 form which I think was taken around 1918.

I have searched for shipping company flags and cap badges but have not been able to find anything that looks similar and so I wondered if you might be able to shed any light on the matter or give me any pointers where to search further.

It is difficult to be sure but I suspect it may belong to Bullard King & Co. They were taken over by Union-Castle in 1919 and the staff would have been absorbed into the the whole company.

It could well be that Peter worked initially for Bullard King and was then taken into U-C after the take over. 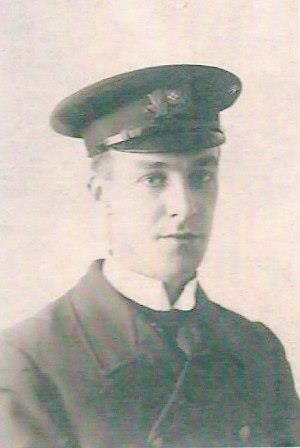