Andrew, a native born Manxman, coming from a family of seafarers decided as a young boy that it was to be a ‘sailor’s life’ for him. After attending Murray’s Road School in Douglas, Isle of Man he joined HMS Conway in May 1958 – the first step in what was to be a thirty two years sea career. He enjoyed HMS Conway and made many friends there, many of whom he met again at Conway’s 150th anniversary celebration in Liverpool in August 2009.

On leaving Conway in April 1960 he joined Cayzer Irving’s famous Clan Line as a cadet. The joys of apprenticeship followed. In 1964 having passed his Second Mate FG Certificate, fresh pastures beckoned and he joined Donaldson’s Colina as Third Officer. A very enjoyable period of sailing the Great Lakes began. In 1965 he married his childhood sweetheart Doreen and soon the call of home and family was strong. Gaining his 1st Mate’s FG Certificate in 1966 he returned to home waters joining the Isle of Man Steam Packet Co. He later gained his Master’s HT Certificate. Andrew’s grandfather, also Andrew Douglas, had previously been the General Manager of the Steam Packet and he remembered as a young lad reading copies of Sea Breezes passed down to him by his grandfather.

In 1978 a new company ManxLine was founded and Captain Douglas was appointed Marine Superintendent. The new company brought full scale ro-ro to the Isle of Man for the first time.

In 1979 Manx Line was taken over by Sealink UK Ltd and its name changed to Sealink Isle of Man. Soon after, Captain Douglas was appointed General Manager and Director whilst retaining his Marine Superintendent’s responsibilities. Becoming a landbound sailor posed many new challenges not least having to deal with PR; marketing; business; political and trade union negotiations. All these challenges were met head on in typical Andrew fashion with determination, professionalism and humour. When Sea Containers bought out the privatised Sealink he remained in charge of Sealink IOM. The merger of the two companies Sealink IOM and the Isle of Man Steam Packet Co under the historic Steam Packet banner saw Andrew appointed to the role of Business Development Manager, a position he enjoyed as it allowed him the flexibility to travel. A career move then took him briefly out of the shipping business when his marketing expertise was sought after by a large hotel group on the Island. After a spell with one of the Island’s many ship management companies, Andrew set up his own consultancy in 1993 and also began a writing career. Four books later he found himself, at very short notice, becoming the Editor of Sea Breezes following the death of the respected Harry Milsom.

Andrew loved being editor of Sea Breezes and was very proud of the magazine. When Sea Breezes Publications Ltd acquired the magazine in December 2008 he remained as editor, but was also appointed a director. His commitment to this famous shipping magazine was total – he simply loved it.

Andrew was, however, a man of many parts. Elected as MHK (Member of the House of Keys) in the Manx parliament in 2002 he served as a member in various departments including transport and education until 2006. His many other interests included church, youth work, sport, writing, travel, gardening, walking, Manx history and culture and the World Manx Society. As editor of Sea Breezes he made many friends all over the world. He was a proud Manxman, but above all he was a family man. His love of the sea and ships never faltered and he loved nothing better than to swap tales with fellow mariners. To all those who knew Andrew, his passing will be greatly mourned and he will be sadly missed.

On a personal level I have known Andrew initially as a colleague, but also for over thirty years as a good and constant friend. In our recent acquisition of Sea Breezes he played a key role and was relishing an exciting future for the magazine.

Throughout his recent illness Andrew remained bright and always positive. His fine sense of humour and gift of story telling never diminished. All of us at Sea Breezes will greatly miss a fine colleague and friend.

Andrew is survived by his beloved wife Doreen, children Adrienne, Julie and Richard and six grandchildren. Our sympathy goes out to them at this sad time. 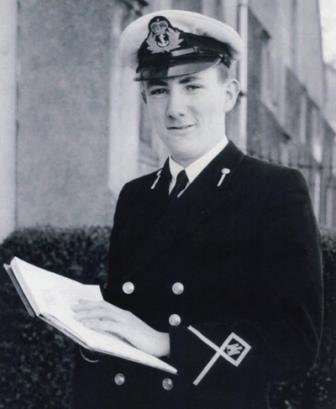 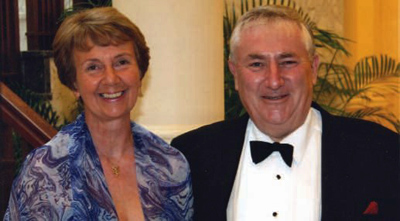 Andrew with his wife Doreen 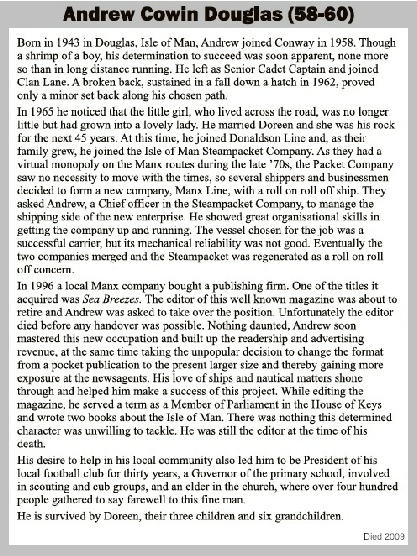