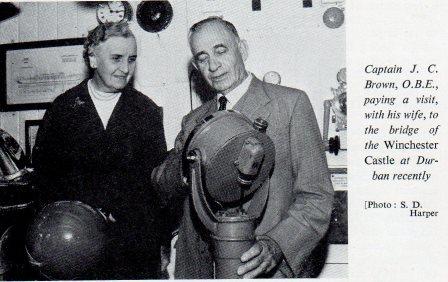 Some of you older South Africans might have heard of a South African author by the name of Lawrence Green. Over a period of many years he wrote of historical happenings in and around Africa, mainly South Africa and usually of the Cape, Cape Town and things related to the sea. All his books are now Africana. He was not a Christian, but here is an extract from his book Eight Bells at Salamander:

One day in 1926 the Union Castle freighter Ripley Castle steamed in from the United States. As a waterfront reporter I went on board hopefully to find out whether anything had happened during the long, hot run. "There's a trimmer named Tony Madison who might tell you a story," remarked the chief officer, Mister John Crombie Brown.

Tony Madison, I found, was a thirty-five year old American of some education who had never worked at sea before signing on aboard the Ripley Castle in Philadelphia. In the tropics, he told me, the work in the stokehold became unbearable for a new hand. The "black gang" staggered about half-naked, almost blinded by the flames licking out of the glowing furnace doors. Sweat ran hot on their necks and arms and trickled into their boots. Even the old hands cursed between the clanging of shovels and grinding of barrow-loads of coal from the bunkers.

It was like that one Sunday night just after the Ripley Castle had crossed the equator. The ship was steaming at 10 knots with a gentle following breeze, which meant no air at all down below. Eight bells sounded midnight, and Tony Madison tumbled out of his bunk in the fo'c'stle, grabbed a piece of ship's biscuit, swigged a cup of water, and stumbled away over the dark well-deck up the ladder, along the deck to the "fiddley" and down to the stokehold.

Ventilators and wind bags were useless that night. The firemen were roasted alive, but steam-pressure had to be maintained, the relentless fires had to be fed. Cleaning the furnaces was agony, for when the red-hot coals came tumbling out they had to be sluiced with water, and that filled the stokehold with steam.

At last the strain became too great for Tony Madison. The leading fireman saw that he was fainting and ordered him up on deck for a breath of air so that he might recover his strength and carry on down below during the rest of the watch. Half dazed, with head swimming and eyes aching, Madison crawled up the steel ladder.

"I caught a glimpse of the stars --- and then the sea closed over my head," Madison told me. "It seems that in my half-conscious state I must have staggered to the side and slipped between the rails into the South Atlantic. As I came to the surface I heard a tremendous noise of foaming water, and saw the creamy wash of the propeller only a few feet away. I cannot imagine why I was not sucked in and cut to pieces."

The shock roused Madison and he shouted wildly. But the lights of the ship were moving steadily away, and he realised that there would be very few hands on deck in the small hours of the morning; just the lookout on the fo'c'stle and one or two men with the officer of the watch on the bridge.

Madison made up his mind that he would keep afloat until he was worn out. The water was warm enough. He struggled out of his boots and trousers and swam slowly in the wake of the ship. It was calm, with only a long swell moving the surface. Each time he came to the top of the swell he could see the lights of the Ripley Castle moving steadily southwards. No one had heard him.

" I was almost certain that I was doomed, but I plodded along after the ship with a slow breaststroke," Madison went on. " One faint hope kept me going --- that I would be missed in the stokehold and that someone would search for me and raise the alarm. I did not see any visions of my past rising before me; that comes later, I believe, when you are half-drowned. As a matter of fact I did not do much thinking. I just concentrated on keeping in the wake of the ship so that if she did put back to look for me I would be there."

Madison's thoughts were beginning to wander when he was brought back to reality by a sharp pain in the hip, followed by a stab in the calf of the left leg. He grabbed at his calf and his hand closed over a large fish. The thought of sharks had occurred to him, and he felt relieved. Then he realised that a shoal of voracious fish might be dangerous, and he felt sorry that he had kicked off his trousers.

Seabirds fluttered down close to his head, and Madison thought they might try to pick his eyes out. He had not seen the lights of the ship for some time, but at that moment the swell lifted him and he saw them clearly. "That's the last I shall ever see of the Ripley Castle," he told himself. But he kept on swimming.

Meanwhile the end of the watch came on board the Ripley Castle, and one of the firemen pointed out that Madison had never returned to duty. By that time Madison had been in the water for forty-five minutes. When the report reached the captain, he swung the ship round dead in her track and steamed back at full speed.

Madison never knew how they found him. He was growing exhausted and sleepy when suddenly he noticed something red --- a steamer's port light --- right alongside him. He called, with the last of his strength, and saw a lifeboat being lowered. They dragged him over the side of the boat, and he went to sleep at once.

That was Madison's tale, confirmed by Captain Sinclair, master of the Ripley Castle, and Mr John Crombie Brown, chief officer. For years I remembered that story when other vivid tales, heard along the waterfront, had passed out of my mind. I never really understood how Tony Madison had been found, at night, in the wide South Atlantic, one and a half hours after falling overboard.

More than twenty years afterwards I went on board the mail ship Pretoria Castle to talk to Captain John Crombie Brown, commodore of the Union-Castle fleet and soon to retire from the sea. Captain Brown was known to his crews as "Eternity" Brown, for he held Bible classes in his cabin for all who cared to attend. I knew that Captain Brown had been round the world in sail and had served through two world wars. He must have had many escapes and adventures; but I was not prepared for the answer he gave me when I asked him to recall the most desperate episode of his sea career.

"It was that affair of Tony Madison," declared Captain Brown. "I felt conscience-stricken about Madison. This is not the story you heard at the time --- it is a much stranger story. You see, Madison had been to me the day before he fell overboard and asked me how he could make his peace with God. I was thinking about my own problems at the time, and I told Madison to call later. When I heard he was missing I felt guilty. He would probably be drowned, and I had not told him.

" So I prayed that I might be given the chance of speaking to Madison again. I asked God to save Tony Madison from the sharks. Then I posted men all along the rails with orders to listen carefully for a shout.

"The ship came back to the position where Madison had gone overboard. I strained my ears and heard the faintest cry, so faint that I wondered whether I was imagining it. Fortunately another man had heard it, too. So I took charge of the lifeboat. As the men pulled away from the ship's side I had to make up my mind which way to steer. Where was the man? I believe that God would answer my prayer, and I steered at random into the darkness. There was dead silence as I shouted: 'Madison ahoy!' Then I shone my torch and saw Madison's head close to the boat. We had him --- after he had been in the water for ninety minutes. My prayer had been answered." 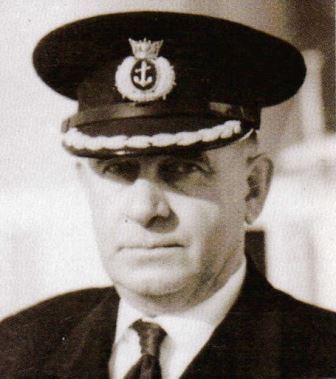