The first twin screw liner on the Cape run she cost £254,000 to build and was launched on 30th December 1890 by Miss Giles, the Chairman's daughter. Her figurehead was of Sir William Wallace, a Scottish hero, and her stern was decorated with Royal Arms of Great Britain and the Lion of Scotland.

During her trials on 8th May 1891 she achieved a speed of 19.62 knots over the measured mile in Stokes Bay.

Her maiden voyage from Southampton to Cape Town via Madeira was completed in the record time of 15 days 9 hrs 52 mins and this was reduced, in 1893, to 14 days 18 hrs 57 mins, a record which was to stand for 43 years until surpassed in 1936 by the Stirling Castle. However, fuel consumption was high and at the April 1893 AGM the Chairman reported that the ship had incurred a loss of £5,000.

By now she had a white hull and was referred to as Union's 'White Elephant'. In December 1895 she had to put into Vigo with engine problems and after transferring her passengers to other ships returned to Southampton.

During her repairs at Harland & Wolff's yard attempts were made to increase her payload by lengthening her by 54 feet but this proved to be unsuccessful.

In 1897 the millionaire Barney Barnato committed suicide by jumping overboard during the night.

She was used as a troopship during the Boer War and during this time was transferred to the Union-Castle fleet following the merger in 1900. She was given the new red and black funnel but retained her white hull.

In 1901, together with the Dunvegan Castle, she hosted the members of both Houses of Parliament at King Edward V11's Coronation Spithead review.

On 12th September 1903 she berthed at Southampton for the last time, to be replaced by the Armadale Castle ,and was laid up at Netley until September 1905 when she was sold to the Hamburg America Line and renamed Oceana.

In 1907 she was transferred to cruising following loss of the Prinzessin Viktoria Luise and was converted by Harland & Wolff for such deployment.

She was sold to Bermuda-North Atlantic S.S. Co of Toronto for £40,000 in November 1910 for cruising between New York and Bermuda but still proved expensive to operate.

In 1912 she became the property of Morse Dry Dock Co. after being arrested in New York for outstanding debts and was laid up in the River Hudson. She returned to service in 1914 to provide cruises for Americans who could no longer visit Europe but, although backed by her owners and other US capital, the venture only lasted three months.

In February 1915 she was purchased by Cia Trasatlantica of Cadiz to replace the Alphonso X111  which had sunk at Santander under mysterious circumstances. Renamed Alphonso X111 she was deployed on the New York-Cadiz, and later, Bilbao service to carry Europeans wishing to travel to the US on a neutral vessel.

She was renamed Vasco Nunez de Balboa when a new Alphonso X111 was built in 1923 and continued on the New York route until later transferred to the Cadiz-Havana run.

She was laid up at Cadiz in 1925 and finally sold in February 1927 to Italian shipbreakers. 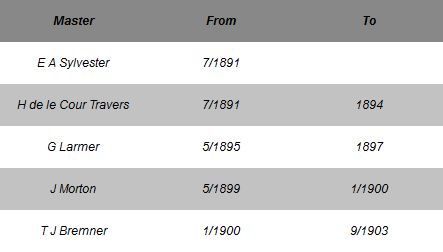 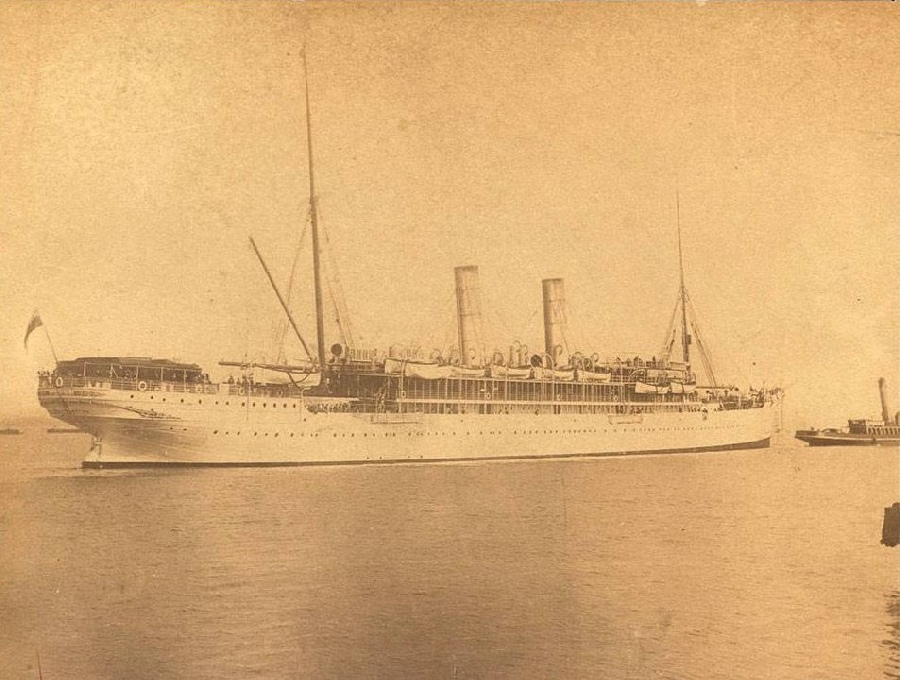 A waterline drawing of the lovely Scot.

She is shown before she was lengthened in 1896 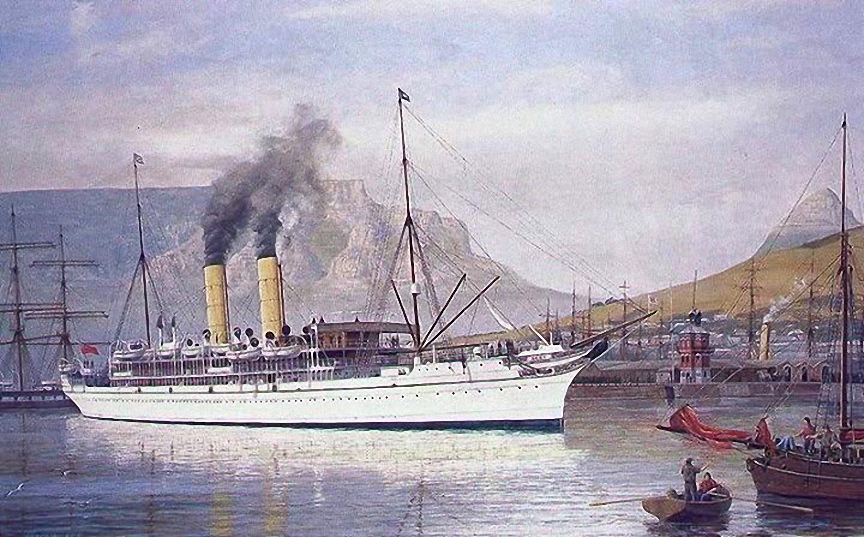 In attandance at the bow is the tug Panther 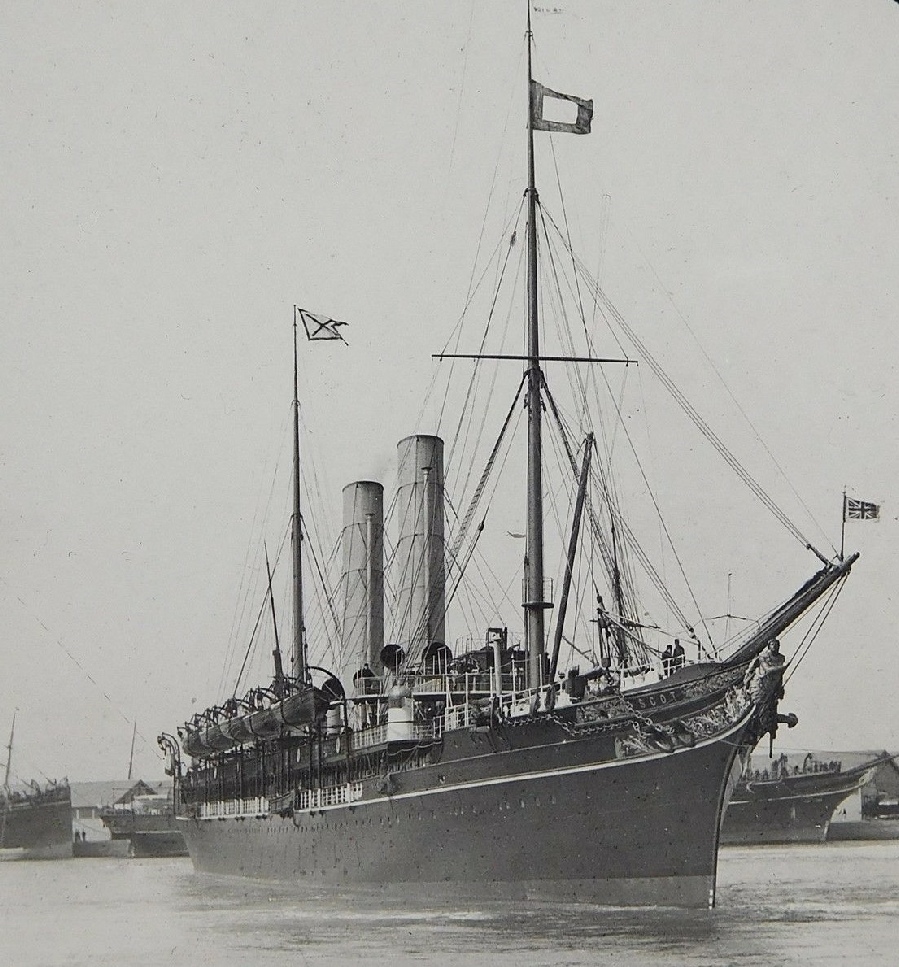 Scot leaving Southampton for The Cape

The Royal Mail Pennant at the fore mast head. 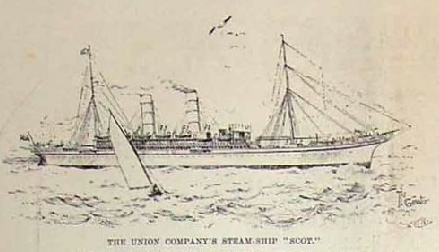 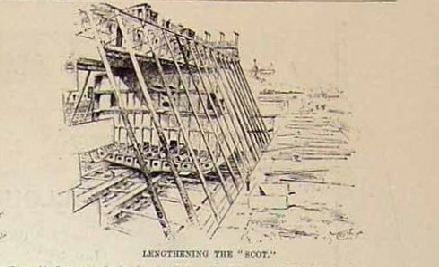 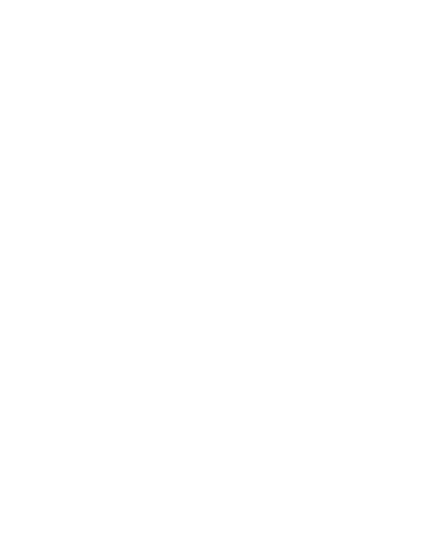 The Greater Scot, as she has been aptly dubbed. On July 18 takes her regular place among the sailings of the Union Steam-ship Company to South Africa in all the pride of her increased length and other structural improvements, which have been some time in progress in the shipbuilding yard of Messrs. Harland and Wolff, of Belfast.

When, six years ago, this fine vessel of 500ft in length was added to the fleet of the Union Steam-ship Company, many people thought she was before her time; but passenger traffic with South Africa developed so rapidly that three years later the yet larger Norman was added and six months ago it was decided to send the Scot to the shipbuilders to have her length increased by 54ft., The first-class sleeping accommodation extended and the general fittings improved.

For the purpose of adding to the ship’s length, she was cut in two immediately in front of the foremost boiler-room bulkhead, at which point all the rivets were drilled out in the plates. When everything had been made ready, the fore part of the vessel was hauled away to the extent of 54ft., This space being then built up with fresh material.

With a length which closely approaches that of the largest vessels running on the Atlantic, and with a tonnage of nearly 8000 tons, the Greater Scot again takes a prominent position in the South African mail services.

On Saturday she made a successful trial trip from Holyhead to Southampton, with a distinguished company on board, who assembled at the invitation of Sir Francis Evans and the directors 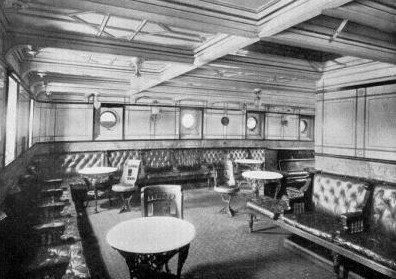 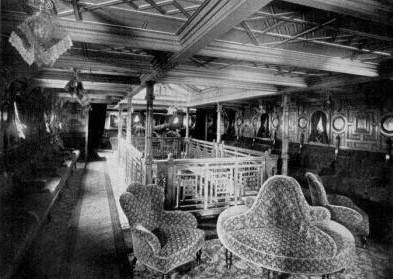