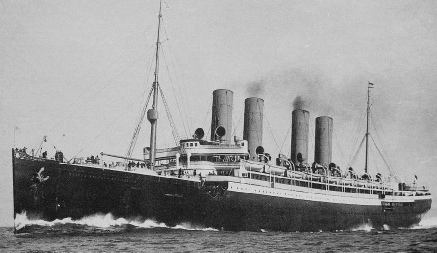 The "Galician" had been following a course ordered by the Admiralty but had deviated when coal ran short.   The German had intercepted the radio messages from the "Galician" enabling her to ambush her.

A boarding party dismantled the radio equipment and removed two military passengers, otherwise proceedings were quite cordial and Captain Day presented the German's with cigarettes and tobacco in appreciation.

Orders for the "Galician" to steam ahead of the German ship were given and all aboard had a nerve racking night but in the morning because of her civilian passengers allowed to continue her voyage.

Upon reaching England she was renamed.

A newsclip of this event can be found here:

Slate reads: "The Union Castle Steamship, 'Galician' from Capetown to Southampton, was on August 15th, when off Teneriffe, signalled to stop by the German Cruiser, 'Kaiser Wilhelm Der Grosse.'

Next slate reads: "The 'Kaiser Wilhelm der Grosse,' had been transformed from a liner, whilst at sea, six heavy guns and 24 machine guns being mounted." A brief view from the "Galacian" of the German four-stacker auxiliary cruiser, "Kaiser Wilhelm Der Grosse."

The next slate reads: "Bearing down on the 'Galician' at a speed of 24 knots, the criuser signalled to the liner to 'Heave To.' The marconi operator sent out the 'S.O.S.' distress signal and the cruiser ordered 'Cease communication or we will sink you." Two officers photographed on deck of the "Galician." View of the Cruiser near the "Galician." Boat carrying German boarding party arrives at the ship and they climb the ladder to board. A German sailor seen aloft at the "Galician's" mast, disabling her marconi wireless antenna. A torn white ensign (missing a canton) flies from the mast. Captain and officers of the "Galician" pose for photographer (marconi operator).

Slate lists British military personnel aboard, who were taken as prisoners of war. One of them is photographed. The German boarding party leaves the ship taking their prisoners with them. The German Cruiser seen departing. Civilian passengers and crew aboard the "Galician," pose celebrating their relative good fortune

During construction she was transferred to Union-Castle following the merger and was never registered as being owned by the Union Steamship Co.

In December 1900, the last of the ten 'G's, went into service and in the same month went to Dakar to pick up passengers and mail from the disabled Dunottar Castle.

On 15th August 1914 she was stopped and boarded by the Armed German Merchant Cruiser Kaiser Wilhelm der Grosse south of Tenerife. After several anxious hours the commander of the German vessel, Max Reymann, signalled ' I will not destroy you because of the women and children aboard, Good-bye'. Two days later the German raider was sunk by HMS Highflyer.

When the ship returned to Southampton she was diplomatically renamed Glenart Castle and became a hospital ship for 453 patients. 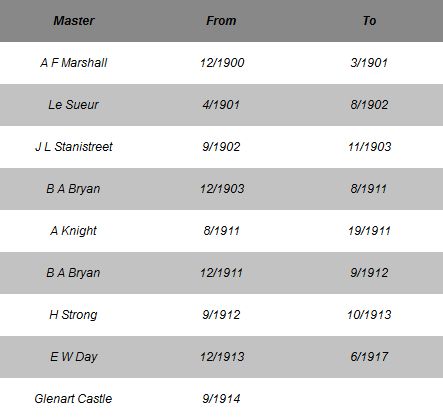 Transferred to Union-Castle Mail SS Co while fitting out.

1918 torpedoed and sunk in Bristol Channel while hospital ship; loss of 168 lives.