She was delivered to the Ministry of War Transport on 5th April 1945 as the Empire Life with T & J Harrison as managers.

On 9th January 1946 she had to put into Valetta, Malta for repairs after shedding a propeller blade.

She was acquired by Union-Castle in March of the same year and given the name Good Hope Castle and a black hull.

On 14th July 1947 she became the first Union-Castle vessel to be transferred to South African registry.

In August 1959 she arrived in Hong Kong at about the same time as the Drakensburg Castle where she was broken up.

At the outbreak of war, the risk of animals escaping from British zoos liable to damage by bombing was considered so great that many of them were put down. By 1946, with life returning to normal, the zoos set about the task of restocking. At the time I was serving as a Cadet in the general cargo ship Good Hope Castle, a 10,000-ton vessel with a crew of 68.

In February 1947, when the Mombasa cargo-booking list arrived, there was great excitement when we read ‘266 live animals in cages – weather deck stowage’. We were supplied with reels of cheap wire rope, clamps, shackles and bottle screws, and by the time we arrived in Mombasa everything was in readiness to secure the cages. With hatches battened down for sea we awaited the arrival of our guests.

The human ones came first: a small Scot from Glasgow zoo and an even smaller Englishman from a zoo in Manchester. Next morning we awoke to the sight of a long freight train loaded with cages – big ones, little ones, rectangular ones, square ones, high ones, flat ones. The leopards came first, followed by cheetahs, hyenas, servals, civets, bush babies, aardvarks and monkeys of all shapes and sizes. Later, cages with two giant sand rats and three zebras appeared on the back of a lorry. During the day other lorries arrived with a variety of other animals, including a baby hippo. Eventually, with every cage lashed and every animal fed and watered, we departed Mombasa bound for Suez, Genoa, Marseilles and Hull.

AT 0020 of the day we were due in Suez Bay, I answered the engine room phone to be told that the greaser had reported seeing ‘animals loose on the foredeck’. With some apprehension I made my way aft and shone my very bright torch over the two after cargo hatches. All seemed to be in order. All was quiet as I worked my way forward. I passed the cheetahs and the monkeys and shone my torch at the hyenas’ cage. It was empty. The three hyenas had gone and the door was swinging loose. I had seen enough and turned to retrace my steps. I shone my torch towards the ladder to the promenade deck and there, under the ladder, were two yellow eyes staring at me. Almost immediately I saw the two leopard cubs sheltering behind their mother. The Second Officer was sitting on the flag locker talking to the helmsman, and I recall with great clarity his response when I shouted, “There are leopards loose on the foredeck”. It took ten seconds for him to realise that I was very sane and very scared before he said, “Call the Captain”. I went down the chartroom stairs to the Captain’s accommodation and, pulling aside the curtain to his bedroom door, I switched on the light and shouted, “Sir, there is a leopard loose on the foredeck!”

In later years, when he was Commodore and I was his Staff Captain, he told the story to many a table of passengers, and it never varied. “When the Cadet told me there was a leopard loose, I said to him, “No, Kelso, there must be more than one – they are not in single cages”. This version, the point of which was that even when rudely awakened,

Captains have an immediate grasp of the crisis, contrasted sharply with my own reminiscence, and I still swear that I saw three feet of daylight between his bunk and bare bottom as I said “foredeck”. Clad only in a towel, he made the bridge before I did. The Chief Officer had also been called and a discussion took place. Was I absolutely certain? Was I sure I was certain? I was adamant that the female leopard and her cubs were hiding under the starboard companionway leading from the foredeck to the promenade deck. The Chief Engineer appeared in his dressing gown, and, after a few minutes it was decide to stop the ship. Almost simultaneously everyone remembered that we had forgotten to call the zookeepers, and I was sent down to rouse them. They, too, reacted with alacrity. By this time the bridge was almost full of people. The Glaswegian zookeeper appeared on the scene and announced, “I cannot find my gun and ammunition, where is it?’ It transpired that it was in No. 3 upper tween deck, and was accessible only by crossing territory currently under the control of three leopards.

The purser reported that the 19 terrified passengers were huddled in the stifling lounge as a captive audience for the shipboard bore, whose latest gem of advice was ‘Never turn your back on a wild animal’, a view not universally shared aboard Good Hope Castle, least of all by me.

Suddenly it struck me that only the Second Officer knew about the empty hyena cage. I waited for a brief respite in the discussion, and then said, “Oh, incidentally, I think there are some hyenas out as well, their cage is empty”. You could have heard a pin drop. My watch was drawing to an end, but sleep was out of the question. The standby man was adamant that he was not going along the afterdeck to call the 4-8, and the lookout emphatically said he was quite happy to stay where he was on top of the bridge. The Chief Engineer rang the engine room to be told that the 4-8 watches had not been called, nor would they be, and that the weather doors to the crew’s quarters had been dogged down.

A scouting party was sent out, and I carried the battery for the Aldis signal lamp held by the Chief Officer. I pointed to the area under the ladder where I had seen the leopards, but it was empty. I had a feeling that nobody quite believed me. Then, quite suddenly, the lookout man shouted, “What’s that by the masthouse?” and there they were, the mother facing the light with her yellow eyes clearly visible, and the two cubs pressed close to her body. We watched in silence as the leopards, still illuminated by the Aldis lamp, walked slowly and deliberately to the starboard entrance of the fo’c’sle space and disappeared inside.

Daylight came and with it a sinister sight – the dorsal fins of sharks clearly visible on both sides of the ship. It was agreed that the only course of action was to go forward and fit the weatherboards in the entrances to the fo’c’sle. The Chief Officer, the Bosun, an Ordinary Seaman and two zoo men made their way forward armed with boat axes and a long boathook and, after a brief check of the area, they dropped the boards in place.

The leopards had been contained, but how had they escaped? The zookeepers said that it was probable that the hyenas had used their powerful jaws to break out first, and then tried to break into the leopards’ cage to get at the cubs. Leopards and hyenas are natural enemies, and there appeared to be teeth marks on the leopards’ cage. But where were the hyenas?

Hyenas not withstanding, the next problem was to get the leopards’ cage forward to try to fit it hard against an entrance to the fo’c’sle head. If we could do that and then remove the slats, the animals might just seek the familiar surroundings of their cage. It took three hours to get the cage in position and it was heavy work in searing heat. The crew had been reassured about the leopards (we played down the hyena side) so they emerged and helped with rigging derricks. At about 1000 all was in readiness. We lifted out the slats from the port entrance, fitted the cage door against it and waited.Nothing happened. An hour passed and it was obvious that nothing was going to happen. Food and water had been placed near the cage door, but the zoo men felt that the animals were unlikely to emerge into daylight. It was decided that we would have to force them out using a hose. The Glaswegian zookeeper said he would direct the hose, supported by the Chief Officer and the Bosun. Jerry, the Ordinary Seaman, had the Aldis lamp and I still had the battery, wishing that the cable was a great deal longer! When all was in readiness we lifted out the slats from the starboard entrance and peered into the darkness. Jerry directed the light slowly along the shelves that usually housed the spare mooring ropes and there they were. The mother snarled silently in our direction when the hose burst into action and a strong jet of water hit her full on the chest. She let out an angry roar and retreated forward. The hose party followed gingerly and slowly drove the leopards to the port side. Suddenly the mother leapt from the shelving and prostrated herself on the steel deck, snarling and tossing her head. She was very angry. The cubs seemed bewildered and they to were snarling. Now the hose party had to turn aft to drive them into the cage. As they did the hose kinked and the strong jet diminished to a trickle. The Bosun shouted and Jerry kicked the hose, but before the jet could be restored to full power the mother leopard lashed out and slashed the zookeeper’s trouser leg to ribbons. The jet drove the mother back, and then, quite suddenly, all three leopards ran into the cage and the door was dropped. It was just after noon. The hyenas were never seen again and it was decided that they probably jumped overboard very soon after the greaser had seen them on the afterdeck. We reached Hull some two weeks later. As the dockers were unloading a cage containing seven monkeys, they crushed it and the monkeys escaped. Despite dire warnings from the Bosun, “They’ll never catch them b’s”, they did, three days later. But that is another story.

Seaways (The Journal of The Nautical Institute) March 2016. 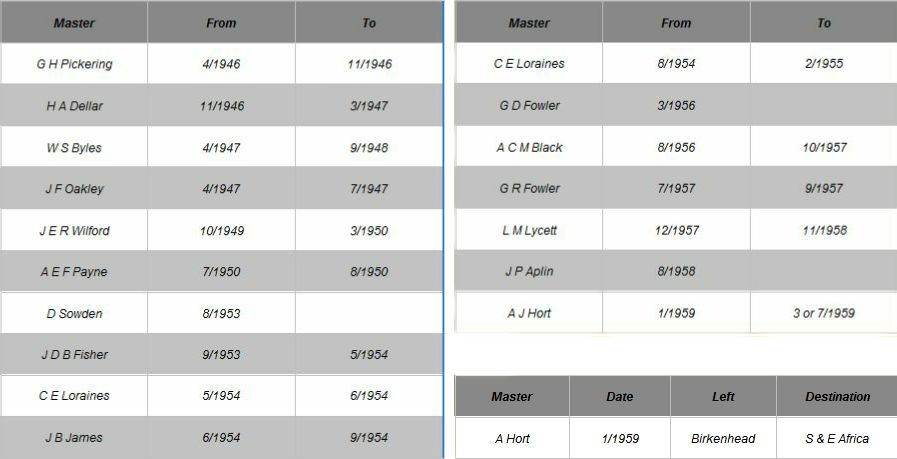