My B&C memories remain fresh to this day. First trip a double header on the Malcolm, then the Ross, Good Hope, Hector Heron (I asked to go there when she was on the Mobil South Sea islands charter and ended up joining in Lagos, running for a month between Lagos and Okrika on a BP charter, never escaped from Africa, when we got orders for Aussie the dear old girl broke down and ended up going back to LM). Bob Royan was the Master and promised to put in a word for some MB experience.

Coasted the MacGillivray and then had to go to the Robertson in Antwerp with the new Zulu wage scales after the walkoff in Gothenburg. Big briefing in St Mary Axe on avoiding the press, ha. Stayed on the fine vessel and promoted to U3O.

After 2nd Mates Keith Parker suggested I had no bulker experience to which I replied I also had no mail boat experience other than working by on the Edinburgh so we compromised on the fruit boats. Back to the Ramsay, where Keith Parker turned up to do his Master’s voyage. We had long on watch discussions where he said I was too young to get a second mates job but when he got back he’d put me on the Reina as 3rd Mate.

Next day we had a telegram from his No.2 in the office was it Burden? Promotion to 2nd Mate on the Argyllshire on our return, which I gratefully accepted leading to my happiest year at sea in my whole career. Phil Rentall took my slot on the Reina and has hardly stepped off a passenger ship since!!

After that it was on to the Ranald and after Mates my final trip on the Alpine was to India (for the first and only time!!). Back in Avonmouth Keith Parker tried to dissuade me from leaving, saying “there’s always a job here for you, Charlie”. Yeah right, a ship a week was going at that time. His last advice was not to join a “Johnny come lately company”.

I went off to exactly that kind of company and joined Harrisons(Clyde) for a wonderful 12 years, a fantastic owner, directors and management, a true family firm.

Promoted to Mate on the Ro/Ro Avon Forest by 23 and to Master on their Stirling Shipping supply boats at 29. I left in 1989 when I fell into my present position of Fowey Pilot although I did help them out briefly in 1991 as Master of their last deep sea panamax bulker for a couple of months which included taking her through the Magellan Straits. Truly old style, invited to Glasgow for lunch in the boardroom and to receive my voyage instructions in person!! Although they are now consigned to history, the owner Iain Harrison has just written a fine book on the company and sent us all a free copy. It was that kind of company.

Piloting in Fowey and latterly Plymouth as well for 24 years I retire in September 2013 and if asked to live my life again I’d be quite happy to do it all again. 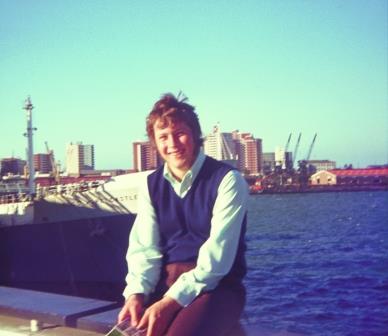 Early in career. With Good Hope Castle in Durban 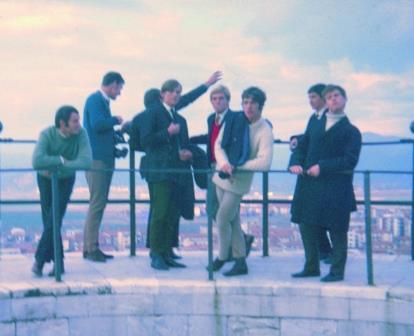 The cadets from L to R are :- Tony Robinson, Ken Boullier, Greg Hunt, Andy Joel, Dick Precious, Davy Ralph, Mick Marsh and I think Alan Crofts waving to some girls I expect. Me taking the photo, on duty (?) Andy May, Phil Rentell and one other I'm striving to recall. Oops. just remembered as I was his best man and he's my daughter's Godfather and I saw him about a month ago!!!! Steve Renfree.

Steve stayed till the end, took a degree and has just retired from Defra in Plymouth.

Mick Marsh was/is still a Harwich Haven pilot and our paths have crossed on occasions.

Phil Rentell moved around after a fair time in Cunard and is Master with Saga now. Lives in Cornwall.

Ken Boullier went to the Logos as a volunteer.

Andy May made contact a couple of years ago, a quantity surveyor in Dubai, I think.

Of the others I know nothing.