was born in Forest Hill, London. He joined HMS Conway in April 1947, and left in April 1949 to join the Union Castle Mail Steamship Company Ltd.

He left the company in 1960 with the rank of Chief Officer. Tony was then living in Teignmouth, Devon and was appointed a Trinity House pilot there.

After a short period the London List opened and he applied for the Gravesend Sea Pilots.

He was told that he must hand in his Teignmouth licence and wait two years for appointment, and so he returned to sea in HMS cable ships.

His voyage in HMTS Monarch was round the world, stopping to lay the first telephone cable between Australia and New Zealand, and then on to Vancouver Island buoying off ‘en route’ in Hawaii.

Tony was appointed to the Gravesend Channel Pilots in 1963 and always described his twenty-five years at Gravesend as the happiest in his life. He was retired on the sick list in 1988. 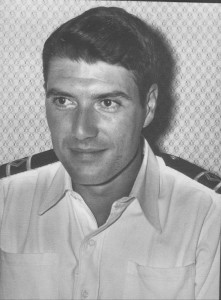