I left school in 1971 aged 15, and went to Gravesend Sea Training School to train as a steward. I was there for 10 weeks, from 13th September to 19th November, before going to the join the pool at Southampton.

I joined Pendennis Castle in December 1971 and stayed with her for 8 round trips. During that time I was officially a bell boy but also helped out as assistant steward, and on one trip I was promoted to the Chief Steward’s valet. My role as a bell boy was varied, but included delivering telegrams, handing out streamers before sailing, which meant I could get to meet the new passengers, delivering tea to the first class passengers, and many other things as well. I can’t really remember the names of everyone from those days, but know that there were 2 Kevin’s, a Les and an Andre among the other bell boys. The captain for many of the trips was Captain Charnley, as I mentioned before.

I do remember that we used to work long hours, even as a 16 year old. I did 7am – c2.30pm, and then 5pm – c10pm, seven days a week, with a half day off in Durban and another half day in Cape Town. As a young boy it was really a big adventure, so the long hours never seemed to worry me, and it was great to see some of the world.

After my 8th trip I left Union-Castle and joined OCL as a steward on a container ship called Flinders Bay, and did a 3 month trip to Australia. After that I came ashore and trained to be a chef, but that only last a year or two.

I have many happy memories of my time at sea, and no regrets. I just wish that I had taken more photos and kept notes of people’s names. I have managed to get hold of a lot of postcards and brochures etc on eBay, which even now has many new Union-Castle items added each day.

My favourite type of holiday now is cruising, as it is great to be on the receiving end of the service and attention.

Well I hope the above is of some interest to you.

Ian now has his own business based around various cruises.

Further information can be found at the following web sites: 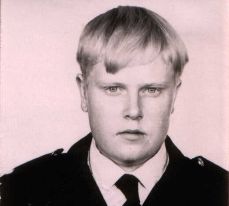