From the Commonwealth War Graves Commission:-

BAILLEUL COMMUNAL CEMETERY EXTENSION (NORD) Country: France Locality: unspecified Location Information: Bailleul is a large town in France, near the Belgian border, 14.5 kilometres south-west of Ieper and on the main road from St. Omer to Lille. From the Grand Place, take the Ieper road and 400 metres along this road is a sign indicating the direction of the cemetery. Turn right into a small road and follow for approximately 400 metres. The cemetery is on the right and the Communal Cemetery Extension is at the bottom end. Historical Information: Bailleul was occupied on 14 October 1914 by the 19th Brigade and the 4th Division. It became an important railhead, air depot and hospital centre, with the 2nd, 3rd, 8th, 11th, 53rd, 1st Canadian and 1st Australian Casualty Clearing Stations quartered in it for considerable periods. It was a corps headquarters until July 1917, when it was severely bombed and shelled, and after the Battle of Bailleul (13-15 April 1918), it fell into German hands and was not retaken until 30 August 1918. The earliest Commonwealth burials at Bailleul were made at the east end of the communal cemetery and in April 1915, when the space available had been filled, the extension was opened on the east side of the cemetery. The extension was used until April 1918, and again in September, and after the Armistice graves were brought in from the neighbouring battlefields. BAILLEUL COMMUNAL CEMETERY contains 610 Commonwealth burials of the First World War; 17 of the graves were destroyed by shell fire and are represented by special memorials. BAILLEUL COMMUNAL CEMETERY EXTENSION contains 4,403 Commonwealth burials of the First World War; 11 of the graves made in April 1918 were destroyed by shell fire and are represented by special memorials. There are also 17 Commonwealth burials of the Second World War and 154 German burials from both wars. Both the Commonwealth plot in the communal cemetery and the extension were designed by Sir Herbert Baker. No. of Identified Casualties: 4343 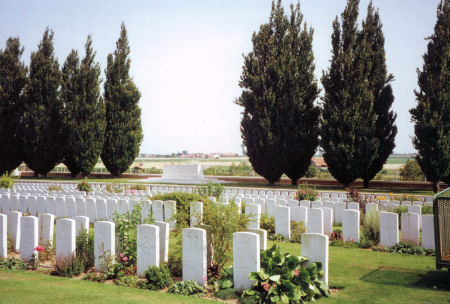 You may remember that I contacted you re Walter Hucks?

Well, in doing a sort out I have found a copy of B.C.Stubbs diary, printed privately in 1915. Walter must have given it to me. The diary starts on Feb. 10, 1915, and finishes on June 11th., 1915, eleven days before he died. The booklet finishes with copies of letters to his mother.

It strikes me that you might like to publish the diary on your website. That being the case, let me know your snail mail address and I will forward it to you for you to keep.

Does his second name imply that his father was an Union Castle man too?