From the Commonwealth War Graves Commission 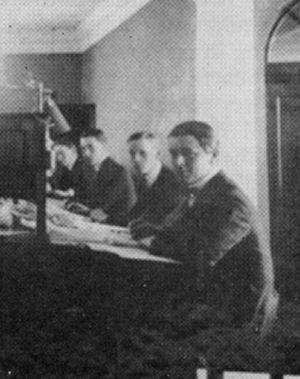 With all deference, may I point out a minor inaccuracy in the caption of the most interesting ancient photographs (I wonder how they came to be unearthed ?) of the interior of the interior of the Union-Castle Southampton office in Canute Road.   They appeared in the contribution of Jack Wood of Cape Times fame (Mail Day, Clansman No. 31)

The picture shows the General Department on the upper floor (the inner sanctum - the manager's room - lead off this).   I  am the ragtag and bob tail junior appearing in the photograph, so I know these photographs were taken in 1912, not in the 20's - some difference, although the interiors did not change.   Next to me is Charles F. Dashper, (he later transferred to the publicity department in the former Fenchurch Street HQ).   The other is Alec Dudley, head of the department.

The lower picture is part of the outward freight department on the ground floor at the east end of the building, the figure sitting on the extreme right in the foreground is Freddie Mollett, who enlisted in the Royal Flying Corps at the outbreak of the 1914 war.   He was a lieutenant, and, alas was killed.