Mr Laverty was chief engineer of the "Rochester Castle" in 1959 when I was third mate.   Charlie Lorains was master.   It was traditional on Company ship's arriving in Cape Town for the master and chief engineer to go up to the Adderley Street office to have a sherry with the manager. Most masters and chief engineers shared a taxi.   Not Charlie and Bill Laverty, they shared the Cape Town City Transport bus that called at "A" berth and cost a penny to the station, round trip penny ha'penny. Aboard the bus the two men did the hands in pockets routine, unusually Charlie lost and reluctantly paid for two return tickets.

Later at lunch, in the saloon the senior engineers table was headed by the chief engineer, senior deck officers by the master, Charlie could not hide his anger, leaning over he said in his broad Robin Hoods Bay dialect, "Don't forget you owe me a penny-ha'penny". Mr Laverty agreed this was the sum and this exchange became the luncheon daily routine for the next few days.   But ever so gradually Mr Laverty's response became less acknowledging, even questioning, he demanding to know the reason for this debt before grudgingly agreeing it was so.

Then came the day, a couple before docking in Southampton, when Mr Laverty, after Charlies, "Don't forget" subject of conversation retorted he owed no such thing! Poor Charlie almost died of apoplexy, turning purple he exploded, "You b*****d, you do and I'll take it off you in fines & forfeitures!!!!!!!!"

I think Bill Laverty's spirit must have been well pleased at saving himself the cost of his funeral! 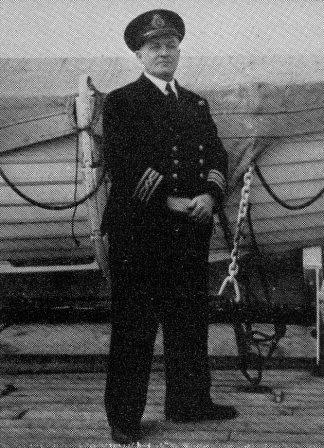 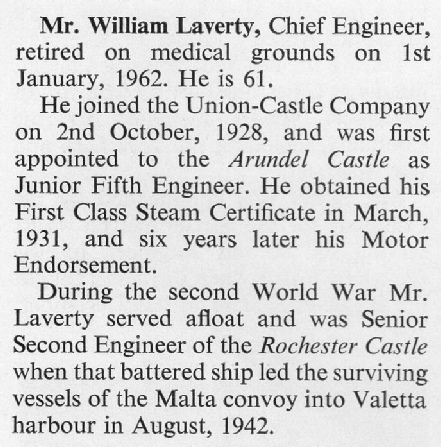 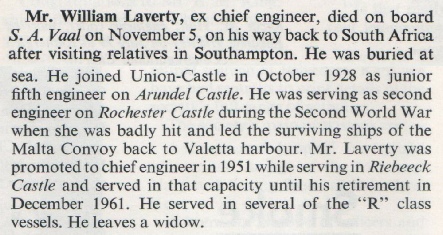