From the Union-Castle Chronicle by Marischal Murray.

'Before the war one or two less distinguished vessels in the Union-Castle fleet were general cargo carriers, pure and simple.   Their hulls were not painted lavender grey, but black.

The Dundrum Castle, 5,299 tons, was one of thee prosaic cargo ships. If her career, hitherto, had been undramatic, this was soon to change. In June, 1940, the Dundrum Castle (Captain M.H. Williams) lay at St. Nazaire, in France, while all around the world seemed to be crashing down.

The Dundrum Castle had been at St. Nazaire for several days.   On board was military cargo for discharge at Dunkirk.   Dunkirk as a port of discharge was about to vanish from the map.   At St. Nazaire the German planes were flying over.   The Dundrum Castle with her A.A. guns joined in the battle.   On Monday, June 17th, instructions came that the vessel was to get out of the port at 2 o'clock that afternoon.   She was just about to sail when 500 troops and a few civilian refugees were hurriedly put on board.   Somewhat delayed the vessel left her berth, proceeded to the lock, and then entered the river, bound for the Channel and shores of Britain.   She was to get no further on that terrible afternoon.

It was just after 4 p.m. that German aircraft came over and attacked the shipping in the harbour.   In addition to the Dundrum Castle there was a large liner about to leave for England.   She was the Lancastria, well-known on the North Atlantic in the days before the war.   On board her now were 5,000 British troops, men of the B.E.F. (British Expeditionary Force) lucky to be getting out of France.   The Germans scored a direct hit on the Lancastria; the stricken vessel turned slowly over on her side and sank; the water that surrounded her became a mass of blazing oil.   3,000 men perished in the inferno.

At all possible speed the Dundrum Castle made for the scene of the disaster, joining with other craft in such work of rescue as was possible. Two of her lifeboats were manned and sent away, one in charge of Mr. D.P.H. Klasen, Chief Officer, the other in charge of Mr. W.G. Shannon, 2nd Officer.   To save many lives was quite impossible, and the work of rescue was slow and painful.   The water was thick with fuel oil from the sunken ship, and to drag even a single survivor into the lifeboats took considerable time.   The Dundrum Castle's lifeboats were the last to leave this scene of horror, and the crews were exhausted when they got back to their ship.   By their efforts over 120 lives were saved.   It was not possible for the Dundrum Castle to leave the anchorage at St. Nazaire that night, but at 11 p.m. Captain Williams was signalled by a British destroyer to join up with the next convoy going out.   The Dundrum Castle joined the convoy and on June 20th she landed her 500 troops and the refugees in the safety of Southampton.'

Dave Klasen had spent the whole night pulling bodies from the oil, he never recovered from the experience and never returned to the sea. The Company (they never laid off anyone either sick or injured or, who like Dave simply could do no more.) made him staff Chief Officer.

There must be many who recall Dave with affection, a very kindly man who never talked about his past.   He came aboard the mail ship in Southampton each morning at eight o'clock with his brief case holding his sandwiches and news paper.   After inquiring if everything was 'alright' and being assured that the day was indeed exactly like the last Dave retired to the Chief Officer's cabin for the day and the crossword.   At 5 o'clock sharp Dave left to go home after once more being assured that 'all was well' and signing the log book. 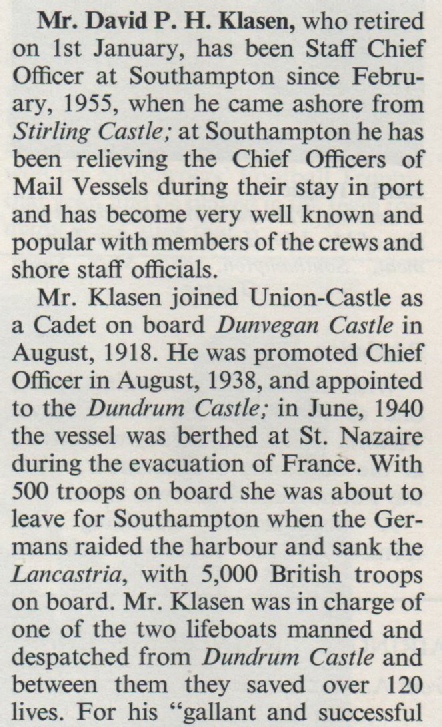