'Ginger' did his two year pre sea training on the old H.M.S. "Conway" and was a contemporary of Mick Peters.

I believe Ginger left the sea either before or just after his 2nd mates.  Very tall and gangly, a good shipmate.

The Mission to Seaman Padre loaned us his rather ancient Morris 8 for the day, very much before the days of 'health and safety' and political correctness!

'Ginger' is the cadet in the foreground with the 'fag' in his mouth, we all smoked like chimneys and as can be seen, were not members of the Temperance Movement either!

They were very happy days. 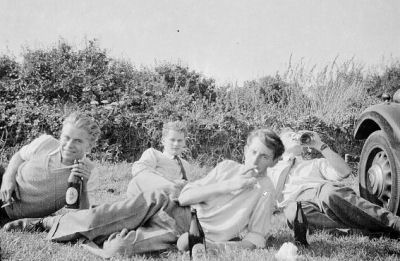