Started with Union-Castle Line on the old "Dunnottar Castle" on her last voyage out of Cape Town to King George Fifth Docks London on the 16th July 1958 as 1st Class Asst. Stwd.

Then went to Southampton and joined the mail run on the Stirling Castle as Tourist Class Asst Stwd, and did a few trips with her signing off on the 6th January 1959.

After this I had a short break and then decided to quit the M/Navy, joining the RAF beginning October 1959.

This photo of Vernon will bring back memories to many South African's like myself.  Vernon when a steward with the SAR (South African Railways)  They were frequently to be seen in the carriage doorway enjoying a cigarette 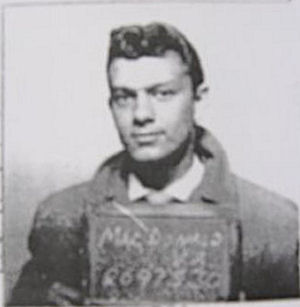 No not a convict!!!!!!   Something we all knew very well, Vernon's photo from his discharge book.

The Dunnottar Castle has a very special meaning to me, as it was my very first Ship I sailed on and also her very last Voyage from Cape Town to London King George 5th Docks.

Having worked on the South African Railways for a few years before, I gained a lot of experience in Silver Service (serving passengers) thus when I applied for the position on the Dunnottar Castle as a 1st Class Assistant Steward, I was more than thrilled that the Chief Steward accepted my application there and then.

Well to say the least from then it was a real run around getting all my necessary things in order, such as my Police Clearance, Travel Documentation etc.

I was running from pillar to post for a full day, but managed to get everything done, it was close but I made it.

I then reported to the Chief Steward and was given the task of cleaning the Dining Saloon Steps, well that shook me a bit but on I went and did the job.

Before I knew it we were well underway and I recall looking out the porthole just in time to see my dear Mother and baby Sister standing there crying.

Well that also brought tears to my eyes but it soon passed and I was now well and truly at sea.

It was a memorable trip for me as well as a very new experience to say the least.

I served in the 1st Class Lounge,with only 2 tables of 4 guests each, so it was for me a piece of cake after running around on the trains serving up to 3 sittings of 12 passengers.

We had a lovely trip via the Canary Islands, the only thing was I recall it being very very hot through the tropics, whew!! and the passengers still ate like mad!!!!

After rather a slower trip than it would normally have taken another mail boat we arrived in London in the wee hours and it was very foggy, my first look at the old London fog haha!!

One other thing was the lovely White Cliffs of Dover I saw on approaching England, it was awesome!!

Yes those were the days and I was then just a mere lad of 17 years of age.

I later went on to Southampton to join the mail run and served on quite a few like the Winchester, Sterling, Braemar (Round Africa) etc.

The Golden Years of my life.